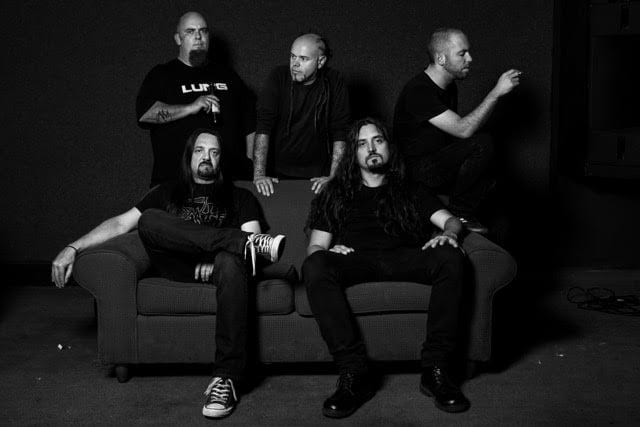 It’s quite astounding to realise that this Aussie heavy music institution formed way back in 1992 and had survived and prospered through all of the trials, tribulations and many ups and downs that all hard working original bands go through, across virtually a quarter of a century of existence. When asked how this all makes him feel, frontman Greg Trull of Dreadnaught, an institution in his own right, has a very simple response.

“No, that’s just a figure of speech,” he continues, “I think it’s just great when someone who wasn’t even born when the band started comes up to me, and likes the band, or wants to buy an album, or wants to listen to us. That’s enough for me. ”

“We just do what we do, when we play live. It doesn’t matter if there’s 20 people, 200 or 2000 or whatever, it’s still something that we’re all passionate about when we play, especially live.”

The band is stronger than ever, if their brand new album ‘Caught the Vultures Sleeping’ is anything to go by. They sound just as hungry and creatively inspired as ever, and Trull is justifiably proud of what they have come up with.

“Yeah, it’s good man, we’re really happy,” he states enthusiastically, “We’re just rehearsing it now and especially now, we’re ready to start playing it. A lot of the material wasn’t all jammed together when it was written; it was written on computers and stuff. But now we’re just getting stuck into it, playing the finished product. It’s great to have a new set.”

The album was a long time coming; it’s a full seven years since their last release, the slamming, thrash-driven ‘D->0’, but it is worth the wait.

“It seems like an eternity really,” he says, “not that we haven’t been doing anything, we changed drummers in that time, and we had to learn the whole set again as well as starting to write together and start to get new songs up.
“So it’s not like we’ve been idle, we still toured, we still played, it was time we put something new out.”

Across their career, Dreadnaught has managed to walk that fine line between maintaining their core sound while not standing still very skilfully and successfully, and the new album is a prime example of this.

Taking elements of the last two albums, the thrashy ‘D->0’ and the arse-kicking rock of 2005’s ‘Dirty Music’, the band have also injected a new sense of moodiness into their sound on ‘Caught the Vultures Sleeping’, and the album will appeal to hardcore fans while still breaking new ground for the band.

“We’ve always just wanted what we wanted to do, that’s been the whole concept of Dreadnaught,” he explains, “We’ve done that since our first album in ’96. On that album, we had that slow, dirgy awkward kind of sound. Long, epic numbers that were mellow and heavy and straight-out technical style thrash stuff.

“That was always the idea of Dreadnaught, to cover everything in the scope of heavy music, and each time we do it, we do it with something else, something new.”

Punters will be able to experience the full gamut of the Dreadnaught experience in a live setting very shortly, as the band head off on an extensive tour of the nation with a new album and two decades of material to draw from.

“Definitely looking forward to that,” Trull enthuses, “looking forward to getting back out around the country. This is just the first leg of it; we’ll be doing more shows leading up to Christmas, and doing a few more places like Brisbane and Newcastle and places we’re not doing on this first run.

“So really looking forward to getting out playing again, especially since we’re doing almost every song on the new album live, plus throwing in some old favourites as well of course!”