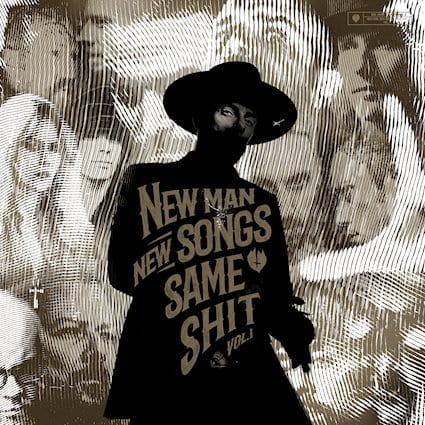 There is just something about blues, folk and country that seems to go hand-in-hand in metal. Artists such as Nick Cave has shown over the years that there is a darker side to blues and folk that needs to be explored while for generations country singers have been singing about oppression and murder. It was therefore no surprise that when Nergal (who many would know as the Behemoth frontman) formed his dark blues/folk side project Me And That Man that their debut album worked so well.

That brilliance that stunned the music world with Songs Of Love And Death back in 2017 once again rears its head on New Man, New Songs, Same Shit Vol. 1 and album that I get the feeling I will be playing over and over for a great many years to come.

One of the joys of listening to a Me And That Man album is the album takes you on two very different journeys. The first being a story-telling journey, if you sit and actually listen to the lyrics of each of these songs you will see that each track tells a story in itself, it’s like dark poetry or a Gothic short story. The second journey is the one the listener is taken on as the array of musicians that lend their vocals to the album each bring their own tone and mood to the ‘story’ that we are listening to at the time.

This isn’t an album that is all about the vocalists though, no, even musically things change here quite quickly. For example opening track “Run With The Devil” is a foot-stomping, catchy blues driven rock track complete with saxophone. Then there is the gospel sounding “Surrender”, while the banjo, piano and harmonica infusion on “Deep Down South” makes it sound like it was recorded at a good old fashioned jamboree at a Western Tavern.

Nearly every track on this album is worth listening to on repeat but there are some stunning highlights. The dark folk nature of “Burning Churches” makes it sheer brilliance while the amazing vocals of Ihsahn on “By The River” are only bettered by the stunning guitar work.

Then there is the smooth “How Come” – a rock track with the brilliant Corey Taylor at the helm, but the highlight for me is the violent love song “You Will Be Mine” which features vocals by Matt Heafy. Not since “Where The Wild Roses Grow” has there been such an intriguing murderous love ballad.

There is a beautiful, moody darkness that comes from listening to Me And That Man. The atmosphere created by the music on New Man, New Songs, Same Shit Vol 1 is simply perfect for this global lockdown. It is the soundtrack to this period of time that we need. Hauntingly beautiful and a song-writers dream this album is true genius.