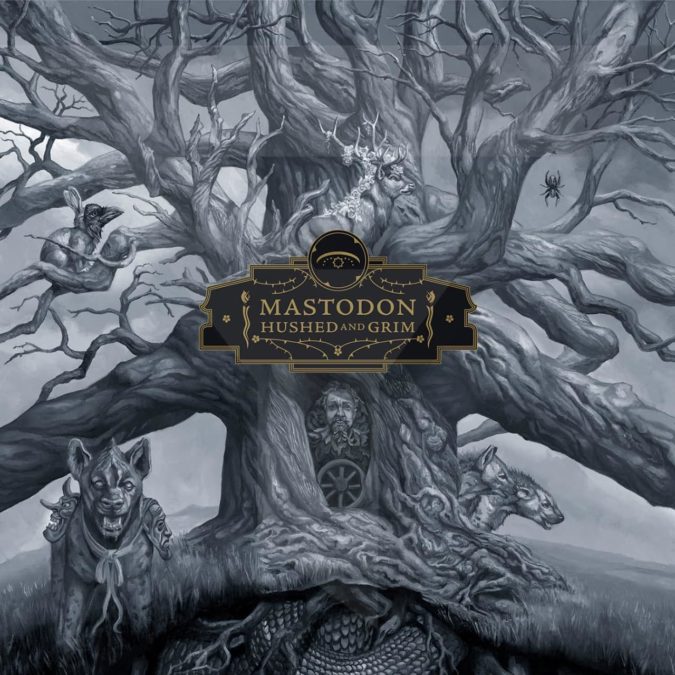 Album opener Pain With An Anchor starts off with a serious rumble courtesy of a succession of rolls from drummer Bran Dailor, instantly throwing you into the action and letting you know that despite their recent more mainstream success, Mastodon are not, will not, and would never want to be a mainstream band.

If you are even remotely familiar with Mastodon you would know they feature some of most talented musicians in the world that also happen to be quite handy when it comes time to putting voice to their music.

Featuring Troy Sanders on bass and vocals, Brent Hinds (guitar,vox), Bran Dailor (drums,vox) and Bill Kelliher on guitar, Mastodon don’t just make music, they CREATE it – and that is a huge difference.

Returning after 2017’s massively successful Emperor Of Sands that saw the band win a Grammy Award, Mastodon pretty much announced in the initial production stages that they planned to go one better with the announcement of their first double album, an ambitious feat in the modern age of short attention spans even for a band as strong as Mastodon.

So, back to the first track from Hushed And Grim.

Pain With An Anchor begins as you would expect, Sanders vocals conducting proceedings and dragging you in before an almighty musical breakdown that feels like the world is crushing around your speaker system.

The Crux comes in with haunting guitars and even more haunting atmospherics before exploding into anarchistic chaos.

I have to admit I have not heard much of Sanders outside of Killer Be Killed where he shares vocal duties with four other gentlemen of repute, but fuck me, this guy can sing!

Again, as I mentioned earlier, if you are reading this then you are obviously a Mastodon fan and already know this, but I am admittedly a little late to the party.

Lucky I didn’t turn up drunk because already Hushed And Grim has enough tempo and timing changes to make a sober mind giddy!

The music is all over the place but all the better for it and even at this early stage I can see why they had to spread their material over a double album.

Sickle And Peace starts with children’s voices, seemingly in distress, and as the vocals kick in with soothing grace I get the feeling this is Mastodon’s album ballad, but not a bad one at that.

More Than I Could Chew lights up the speakers with a bright interlude, but I’m just waiting for that to be smashed out of the park anytime soon.

Yep, there it is.

The beauty of Mastodon is the subtle nuances in their music, sporadically shifting gear without ever really putting their foot fully to the floor. This track is a slow burning number, ebbing and flowing with rock intent and sweeping – almost epic – harmonious interludes.

Moving on through the acoustic sounding The Beast – which is a blues tinged stroke of genius – to Skeleton Of Splendor, Hushed And Grim feels more like a body of art than anything else I have heard this year.

It is all encompassing and engrossing, almost cinematic in scope at times.

Teardrinker brings back the distortion and thunders to life, feeling a little deliberately restrained but still moving quickly, if that makes sense.

This song was one of the singles, so you probably already have your opinion so let’s move on.

The same with Pushing The Tides, but I have to add here this song is one of my personal faves…

Peace And Tranquility is anything but, starting with an eclectic drum pattern that could literally go anywhere before… going everywhere! But in a good way.

Dagger almost pierces your soul with a gradual introduction that is accentuated by minimal noise except for Sanders engaging vocals. It has an almost tribal feel to it and could easily be the interlude to galactic war should that ever eventuate.

It is yet another example of how well Mastodon can craft a piece of music, using minimal effects or conventional methods. Dagger ambients itself through almost Egyptian style sounds into tribal elements and back again, all the while led by Sanders whose voice is effectively an instrument in its own right.

Had It All starts with soft textures and slowly builds its way into an emotional rollercoaster that gradually ascends into a sweeping and emotive tune.

I should point out here too that Hushed And Grim is dedicated to the memory of Mastodon’s departed former manager and close friend Nick John. Although I haven’t got the lyrics in front of me, the feeling of loss, sorrow and respect runs deep throughout the album in obvious testament to John, which could explain the serene nature of many of the songs. An album that is already beautiful in nature is only accentuated when you understand the bands’ motivation.

Savage Lands kick things firmly in the scrotum, picking up the intensity, and even from the first 30 seconds or so I already know this is my new favourite track. It is intense and angry, but strangely still restrained, as though Mastodon are playing within themselves because they know that is when they are at their best.

Unlike many double albums in the past, nothing on Hushed And Grim feels forced or rushed and everything feels like the work of a band who know their musical identity and more importantly are comfortable with it.

Gobblers Of Dregs again brings back the atmospheric grandeur of Mastodon, reverbing its way through the early stages before coming in with a sludgy sound that the early inventors of grunge would be envious of.

By the time album closer Gigantium bursts to life, I have discovered a new-found respect and appreciation for a band that possibly 90% of the rest of the world were familiar with, except for me.

I’m a Mastodon fan and proud of it, and Hushed And Grim is only the start of my new musical journey with them.