MAN WITH A MISSION: Break And Cross The Walls II 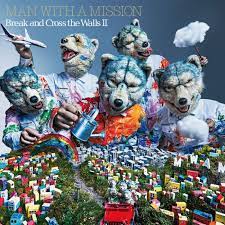 Who the hell are Man With A Mission? I mean, literally, who the bloody hell are these blokes with their fancy wolf masks on? Who knows, and who really cares to be honest, I’m not here for a meet and greet, I’m here to tell you if their tunes are any good.

I’m thinking they must be alright if they’ve managed to make Part II of an album called Break And Cross The Walls. Does anyone know if Part I was any good?

Anyway, the opening track kicks off with some weird synth and an effected voice counting us in with a quick 1,2,3,4. The track soon kicked in like some kind of electro pop rock tune. It’s an interesting sound, it rocks, but it’s bloody weird. Strangely enough, I can see a place in the market for this, I’m just not sure which market.

This band reminds me of something, but it’s not Extreme, even though the next track is titled More Than Words. They are singing in some weird language for this track, and a quick google has me learning that they are a Japanese band. And that’s the market they’d fit into, cause this shits as weird as vending machines that dispense dirty panties.

Moving on, All You Need is all about the synth to begin with, but it shortly picks up its game with some heavy guitar and fast-paced rap. This one is in English which is pleasing to my ears. As weird as this music is, I’m actually quite enjoying it and the production is on point.

Next up is Blue Soul, and it’s quite refreshing to hear a song start with drums and guitars instead of synth. This one again is in Japanese, and on that note, I’m out. If I can’t understand it, then it isn’t going to grab me unless the music is absolutely spectacular, which it is not. Take note Rammstein.

The following track Left Alive reminds me of something straight out of the early 2000’s Nu- Metal invasion, maybe even earlier, with hints of Biohazard and Ministry throughout the verses. The choruses would slot right in alongside Linkin Park.

Church organs hey? This could either go super doomy or super soft. Unfortunately, it is the latter. Perfect Clarity is a ballad, in Japanese. Way to double down, dudes! More synth, and Between Fiction and Friction 2 soon gets into it with another Nu/Synth/Industrial track. I actually quite enjoy this band when they do this style of track, but the loud synths and scratching in this one is probably a little too much.

Blaze kicks off in Japanese, and I’m about to bail out. But then it switches back to English, so I hang in for a little while longer. Unfortunately, when the chorus hits, it rocks the fuck out, but in Japanese again. Now I’m just annoyed because I could probably get into this if I could understand what the fuck they were talking about.

Rock Kingdom gets itself on the way with a couple of rocking guitar riffs. It’s a rap metal track, a pretty cool one if you’re into that kind of thing. The chorus kicks in with heavy guitars and a massive bounce. And again, those clean choruses are pure early 2000’s Nu- Metal.

Track 10 is titled Rain, and I don’t know about you, but I’ve had enough of the fucking rain at the moment. It’s pretty much been pissing down in my part of the world for at least a year. And if that’s not annoying enough, these Japanese lyrics are really starting to shit me up these mouldy walls.

The only thing that shits me more than a song with lyrics not in English, is when they mix them up, and you can understand half of it. That’s exactly what The Soldiers From The Start does, which is really fucking disappointing because musically it’s my kind of jam.

The intro to The Victors sounds like something I came up with on Fruity Loops back in 2002. And it doesn’t really get much better after that. It’s an upbeat rock ballad with those frustrating mixed language lyrics. Next. Bagpipes or synth, I’m not sure what that just was, maybe synthesised bagpipes? For a
minute there I was thinking I might get a Korn throwback. Instead, it something I can’t quite define.

Now they’ve gone and really stitched me up, so much that I had to copy and post this track title. Get this up ya! Chiisakimonotachi. I’m not even going to bother to google that one, because this song sucks.

A little but fun, a little bit fucking annoying, but definitely worth a listen. The most interesting album of the year so far!