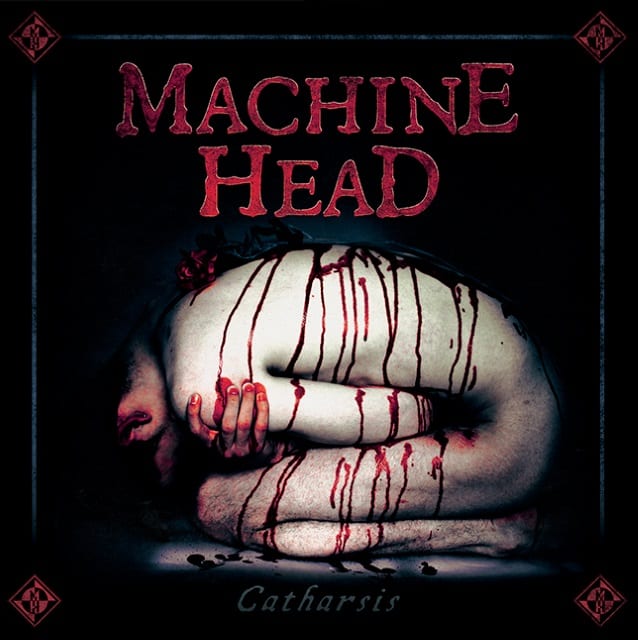 Being a contributor to well-respected metal publication [Editor: why thank you Neil], I make it my business to be a voyeur in other press and online publications and their valid opinions and thoughts whether positive or negative, to albums and artists and the content they contain. Some I agree with and some I do not. But the outcome is always only based on my feelings after delving in and listening and experiencing the music for myself.

There has been a large amount of negative press given to the latest output of Machine Head‘s soon to be released album Catharsis. And it was only these reviews that I was seeing–nothing really positive about. Hell, even Robb Flynn posted the first negative on social media outlets at his disposal.  So, I honestly feel that the heavy community was feeding off that vibe and posting an opinion that only the flamers and haters are famous for. Meaning negativity was invariably feeding negativity and the desire to crucify something before anyone has really taken Catharsis for what it is: a stand-alone, honest, angry, emotionally charged and heavy fucking album that is actually all those adjectives and more.

In all honesty, I erased all I had read from my mind on Catharsis and went in with open mind, heart and ears and immersed myself in it wholly, without prejudice and promised myself and those who choose to read my review that I would review it with the dignity and clarity Machine Head deserve.

The only few complaints I will make straight off the bat regarding Catharsis is I do think that fifteen songs is a bit much and clocking in at 1hr 15mins its a lot to take in in one sitting.

The song “Beyond The Pale” does stink of Strapping Young Lad‘s “Love”, but in all honesty almost every riff combination has been written and now bands and musicians alike are making and creating hybrids of songs past and doing what they can with them and I think that the way both Dev and Robb handled the “Beyond The Pale” debate was perfect, respectful and gentlemanly.

What do I truly think I hear you all ask? I really like Catharsis. In my opinion, it’s honest, open, raw, angry, heavy as hell the way in which we know Machine Head.

In all honesty lost interest in MH during The Burning Red, their last really great solid album. But my passion was reignited after seeing them headline Wacken in 2012 and listening to The Blackening driving out of the holy lands. Then in 2014 my spark lit again with their release Bloodstone & Diamonds which I think was their true return to heavy, although some of the songs were a little long and indulgent. Every song here is typically Machine Head with a few oddities thrown in to mix it up. Like the song to his sons called “Bastards” which is some acoustic country hybrid which becomes an anthemic rock/hip-hop lullaby. Make of those descriptors what you will! But let’s go back to the start and opener to Catharsis – “Volatile”. This is a killer Machine Head track to open with. It is straight up Robb Flynn angry and him doing his lyrical best at being pissed off and telling anyone and everyone that’ll listen which is the staple for Catharsis in its entirety. That’s just who Flynn is and what Flynn does these days, but don’t we all get pissed off and tell anyone who’ll listen how we feel about the world falling apart?

It’s the haters only that give Flynn the fuel he needs and it’s clearly the MH fans that take away positives in the form of artistic honesty. Title track “Catharsis” softens us in with melodic intro and then catapults us into a nice straight up heavy thrash groove driven verse with Robb giving us as much of his vocal range and ability as he possesses. A song clearly about the nature in which music gives all fans everywhere regardless of their beloved genre a sense of identity and comfort and soothes our souls. “Beyond The Pale” is (A LOT LIKE “LOVE”!) a heavy groove song not dissimilar to “Catharsis” with the same kind of driving straight up thrash, finger rolling riffage courtesy of Flynn & Demmel. Nothing complex but plenty enough to keep our heads nodding.

Track four and one of my least favorite songs is “California Bleeding” and another of MH’s social commentary on all things drug-related and it’s causes and effects, sex and the desire on those paying and getting paid for it and and why they desire it for a release only, well, you get the idea! It’s a driving mid-tempo tune that keeps the head nodding along in unison with Dave McClain‘s beats colliding in harmony with MacEachern on Bass.

Rolling onto track five is the perfect, almost second half of “California Bleeding” in lyrical content revolving around drugs but better executed and heavy as fuck “Triple Beam”. My first thought on this song was a guitar-driven WWE intro but with a dialogue on the realities of the trauma of drugs. “Kaleidoscope” is nothing more than a straight-up thrash song heavy on its ability to be complex in its simplicity. What I actually really like about this song is Flynn’s vocals. They are raw and unforgiving and he hits unapologetic off notes in delivery but that what I like about.

There is nothing perfect about Catharsis, but I can see and hear an honest, a ‘not give a fuck’ attitude (we’ve become very used to that thanks to Flynn’s black and white, no grey attitude) so to speak that other bands may be a little too scared to address.

We’re now halfway through at track number eigh with “Hope Begets Hope” and theme and format we’ve been given by Machine Head is now a formula we’re used to. Not that that is a bad thing, but I definitely think this is where Catharsis could and should be winding down.

The final descriptors I’ll give is where I would of loved Catharsis to conclude is the song “Behind the Mask”. Here is the absolute highlight of the album. Everything for me in this song is perfect! It speaks and conveys volumes and is such a heartfelt, emotional, grounding and final ballad type song that would have been the best curtain call for this album. It is something Machine Head has not really done before and it is an absolute credit to what I was saying at the beginning and that is the raw and honest open ability of Flynn and although he has a formula we are accustomed to he is breaking a mould which is refreshing and what truly the song that made me take notice of Catharsis.

So, in summation, haters are gonna hate, loyal fans will be unable to see any wrong due to their inability to hear a bad word about Machine Head, but what I have given here is an open and honest review without bias and from the heart. Album of the year material? Probably not. Catharsis is a really good solid addition to the MH catalogue. Yes, there is some preachy self-indulgent content riddled throughout the album but isn’t that why we’re in bands readers? To have a voice, an opinion and be heard? Of course, it is! And Catharsis does that without apology and poignantly.

Catharsis is out on 26th Jan courtesy of Nuclear Blast Records