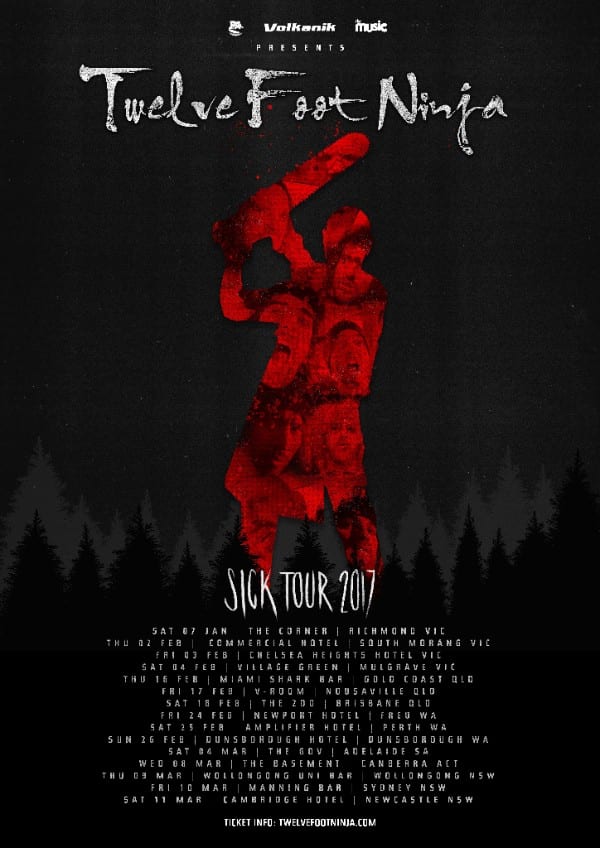 I’ve heard of Osaka Punch before, but have never heard their music.

Unfortunately, this situation was only improved marginally when I saw them as support for 12 Foot Ninja at the Miami Shark Bar on Thursday night, but the few songs I managed to catch were enough to make me want more.

I caught their last two songs – one being an instrumental – and despite having technical difficulties which forced a premature end to their set, their blend of funk metal came across well to the already packed venue and has already ensured I will make that extra effort to see a full set next time.

12 Foot Ninja are rapidly cementing themselves a name in the upper echelon of Australian bands, and after recent supports of bands of the calibre of Sevendust and Disturbed tonight served as somewhat a test of their mettle in carrying the weight of a headline show on their growing shoulders.

They passed with flying colours.

Launching into ‘Collateral’ and then ‘Vanguard’ and ‘Mother Sky’, 12 Foot Ninja catapulted themselves into their performance amid a swagger of green lights which set an eerie feeling that translated well from the stage to the audience.

Their mix of reggae, jazz, funk and metal may not seem to be a combination that is sustainable over the duration of a concert but these guys from Melbourne have perfected the art of constructing a song and lacing it with enough tempo changes and breakdowns that their eclectic nature alone is enough to transfix you to the spot before your bodies natural rhythmic instinct kicks in and has you moshing and moving to the beats against your will.

Guitarist Stevic, while being widely regarded as the conductor of the band, is also an accomplished guitarist and his banter with the crowd and efforts to stir them up ensured the needle stayed consistently in the red.

The time spent on the road supporting bigger – but maybe not bigger for too much longer – bands has obviously benefited 12 Foot Ninja, with the band displaying a tightness with their music that has to be heard to be believed.

With an abundance of timing changes and samples and triggered sound effects, the capacity for the music to get lost under the wall of sound is never far from the surface but not once did the musical tempo overshadow the quality of the show.

The music bounced from genre to genre without ever settling on one form, with songs like ‘Post Mortem’ and ‘Deluge’ leading way to crowd favourite ‘Shuriken’ and ‘Coming For You’ before the crowd went… well, sick… to ‘Sick’ and by the end of the concert with ‘Adios’ and “One Hand Killing’ the audience had been treated to a display of musicianship that was a sheer delight from start to finish.

From the lighting to the sound to the infectious enthusiasm on display from each band member 12 Foot Ninja not only threatened to break free at times from the shackles of the stage, they emphatically announced themselves as one of the benchmarks of Australian music in the process.