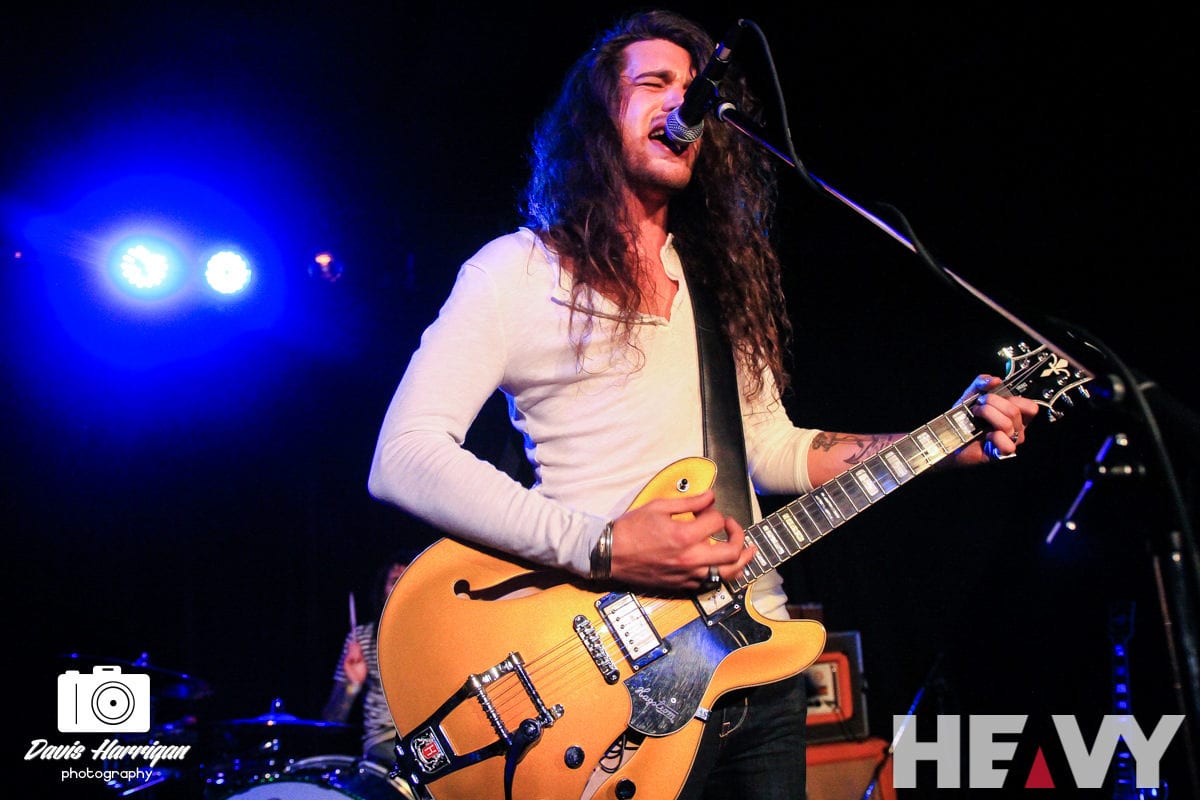 A bouncing and energetic crowd joined The Lockhearts at Sydney’s Factory Floor to celebrate the release of their new single “Ride Home” last Saturday with a host of local and visiting acts.

The single is a taste of “Americana Doom Fuzz”, the upcoming album from The Lockhearts, and with the weekend weather playing nice, there was no better place to be in the Harbour City. It was a very exciting way for this Melburnian to be introduced to the live entertainment scene in the Sydney suburbs.

Local 3-piece Hello Bones opened the night, and have roots firmly entrenched in rock. An amped -up Fender created some stellar, riffy, catchy tones without missing a beat. From opener “Roll Like A Stone” to the heavier, baser “Don’t Come Home”, Hello Bones had everyone looking at one spot – the stage, as they smashed out a ripping set. They were met with warm rounds of reception after finishing with “Like Silver” – but the set was rated gold. They’re going places.

Flickertail (formerly The Bitter Sweethearts) live appropriately up to their band name – think wagging that just won’t stop. The 4-piece had a terrific stage presence and meant serious business. Long hair and high-octane frontman Liam Whelan pressed the “turn it up to 11” switch straight away, as the band hammered into “Let There Be Love” and “So Long”.

It was like a fire had been lit underneath the stage; Whelan and bassist Matt O’Callaghan get the hair-throwing party started. They hooked the crowd – and myself – straight away, bursting into “Fade Away” and “Lennon Glasses”. The evidence of playing together – even if under a different name – was immediately apparent. “Back Of My Mind” was the band’s heaviest of the night, finishing with a flourish that came straight out of the rock and roll handbook.

Then there were The Ugly Kings – bearded and bold, with a blues-rock sound that you might not have heard. Missing current drummer Andy Alkemade, a special call was made to Lyle Jenkins, drummer of Winter Moon – 10 songs to learn in 18 hours before hitting The Factory Stage.

With guitarist Christos Athanasias sporting a sleek new beauty, “Control Freak” burst out of the blocks like a bull with horns, the mix of gritty blues and rock n roll filling the room. Russell “Rusty” Clark whipped out the old-fashioned microphone, and it’s straight through to “Nobody But Me” and the big sounding track “Goodbye”. Despite one or two minor misses, Lyle kept up with gusto.

Playing to some who were perhaps unfamiliar with the Melbourne outfit, Clark played frontman like a champion when David Bowie cover “Lazarus” joined the party, where the lyrics were belted out. If you’ve never seen The Ugly Kings before, it’s all about the unique blues sound and maximum riffs – seen in the title track from the band’s first release, “Of Sins”. Like a smooth, expensive whisky, the song is the music definition of a V8. Athanasias launches into the guitar chorus, bassist Nick Dumont went to town on the jamming, and there was even a hot dance twist from a surprise visitor at the end.  The crowd loved every second of it.

The show was also part of the promotion for the new single “Promised Land” – a booming, bassy, deep song packed with all the juicy bits.

When it was time for The Lockhearts to amp up the fun, The Factory Floor was full and front-row space was at a premium. Tim Meaco, Samuel Sheumack, Jameel Majam and Steve Woodward know how to put on a show and do it with lots of fun and plenty of hijinks.

Rolling out the red carpet with an instrumental, and armed with a huge new material (mixed in with the usual Lockhearts favourites), the night swings straight into “Leatherface” and “Hope”. I think I fell in love with Samuel’s Duesenberg on the spot – spitting out beautiful tunes all night.

It definitely wasn’t a “Call For Help” type of night – except for The Lockhearts trying to get the crowd to pipe up their vocal chords!! Aside from a quick chitter-chatter with the audience, they kept going, into “Little Eden” and a “Sweet Emotion” cover. Then the big one; the debut of the band’s first single from the “Americana Doom Fuzz” album, “Ride Home”. The perfect way to end an exhilarating set, the song builds and is instantly catchy.

There is a synergy among the group that can only be seen when watching them on stage. Jameel’s bass hair flicks and full bends, all while never missing a beat on the bass. It was a tight, rocking, awesome show and display of rock and roll, and a huge credit to The Lockhearts for building up such massive momentum on the single.