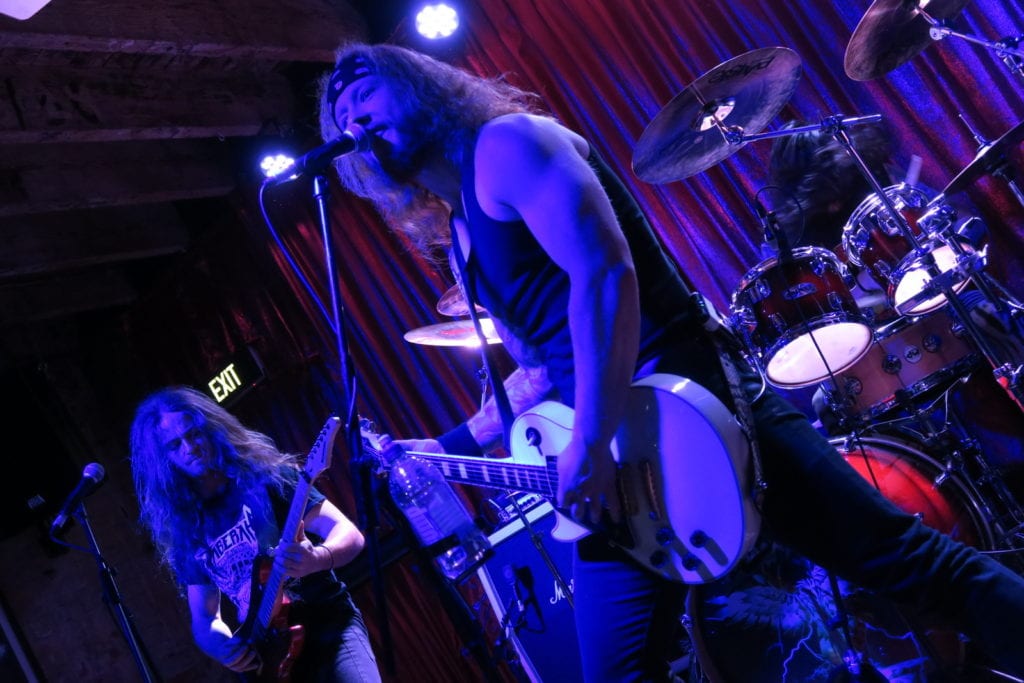 For it’s seventh incarnation, Australia’s own heavy music guru Dave “Higgo” Higgins hosts a night of some of Australia’s most hard-working and beloved heavy acts, all packed into Melbourne’s iconic Cherry Bar with hundreds of local punters. The aptly named ‘Higgo’s Heavy Cherry VII’ is co-headlined by Tasmanian heavy metal heavyweight champions Taberah and Melbourne’s own powerhouse of falsetto and shred Espionage. To further compliment the epic duo of “Tabspionage”, melodic metallers Kill:Death:Ratio were set to make their live debut before many eager and anticipated metalheads.

As the PA began to fade and the sound of amplifier feedback began to echo through the venue, the member of Kill:Death:Ratio took to the stage with a presence of pure excitement and confidence. A rather unique blend of modern metalcore elements and progressive melodies, the rich, crisp tones of guitarists Richard Vella and Riccardo Mecchi, as well as the deep, resonant tones of bassist Josh Ebell struck a beautiful chord with not only myself but every member of the audience below. Vocal duties, supplied by front man Mecchi seemed to soar across the venue, which only sought to reaffirm my positive opinion towards these up and comers. In what felt like an incredibly smart, but risky move, a rather powerful performance of Pantera’s ‘Domination’ was met with thunderous applause, and a genuine desire for more of Kill:Death:Ratio. Despite minor technical issues and occasional staggered transitions between tracks, I can firmly say that Kill:Death:Ratio have earned the respect of every in attendance, and wowed those with their captivating, melodic hooks.

As a band whose momentum has begun to shift into overdrive, it was expected that Espionage was going to be met with thunderous praise from the crowd below, but what I received from the band exceeded my own expectations. The sea of headbangers erupted as ‘High Riser’ blasted into our ears with raw ferocity and enthusiasm unmatched. Currently touring in support of their latest EP Wings of Thunder, the night saw the performance of much of the release’s material, all to massive applause from the crowd. Title track of said EP, ‘Wings of Thunder’ saw a coordinated strike to the vocal chords of every Espionage fan. I think it goes without saying that the most recognizable aspect of Espionage’s sound is the vocal delivery of bassist Andrew Morris, who seemed to flow in and out of mid-range power and a screeching falsetto without any strain whatsoever, whilst I’ve definitely voiced my distaste for this style of vocal delivery in the past, Morris has definitely won me over after such a display. Now a four-piece, the addition of guitarist Chris Lugton, alongside founder and lead guitarist Denis Sudzuka, sent shivers down spines with their blistering speed and power metal-inspired melodies. Drummer James Shelverton held down the rhythm with an iron fist, flowing between precise speed technique and groovy fills with zero percent stress and one hundred percent passion. Every time I witness Espionage live, their sound continues to consolidate and refine, and this performance was no exception.

Across the Bass Strait, Taberah have spent the last ten years “Drinkin’ beers and pleasin’ ears” as one Taberah t-shirt would state, and it’s easy to see how true that statement is. A well-crafted mix of tracks from their entire discography, no Taberah fan was left disappointed with the night’s setlist, whether it was the heavy-hitting classic ‘Burning in The Moonlight’ or the recently re-mastered ‘Requiem of the Damned’, the Tasmanian metallers gave Cherry Bar’s inhabitants enough insane shredding and hilarious stage antics to satisfy them until their return to Melbourne. The duel guitar mastery of Jonathon Barwick and Myles Flood felt almost euphoric at times, as though these two were born to bounce off each other with beautiful harmonies and incredibly tight rhythm/lead duties. I think it goes without saying, that I’m always very critical and judgemental about vocalists, as I see them as the centrepiece to any traditional heavy metal act, and I’d be lying if I said the Barwick hasn’t impressed me every time I’ve seen Taberah live, and this performance was no exception. The low-end grooves of bassist Dave Walsh, whilst at times felt underused or perhaps just a bit too low in the mix, felt powerful enough and perfectly complimentary to every other member on stage. If there were a law against how much fun a drummer can have on stage, then I can guarantee you that Taberah’s spandex-clad sticksman Tom Brockman would be firmly behind bars, I don’t think I’ve ever seen a drummer so enthusiastic whilst holding down the beat with excellent precision in my all years in the metal scene. After an engaging and impressive set-closer in the form of Iron Maiden’s ‘The Trooper’, an encore ensued with members of the audience joining Taberah on stage to perform impromptu covers of Metallica’s ‘For Whom the Bell Tolls’ and KISS’s ‘Rock and Roll All Nite’, which only goes to show the level of enjoyment Taberah bring to not only themselves whilst on stage, but to the audience that surrounds them.

As Melbourne’s metalheads begin to funnel their way back to the bar after the hours of pure sonic assault from all three bands, I was left with nothing but praise to say about every act that performed on Melbourne’s most prolific pub stage. Kill:Death:Ratio absolutely slayed their debut performance, and will no doubt be walking away with a good number of new fans in tow, I foresee great things for these upstarts. Espionage reaffirmed their position in the Melbourne metal scene as one the most beloved and well-composed true metal acts in the country, with or without their Zooper Doopers. Taberah can head back to Tasmania without a single doubt in their minds that they gave Melbourne nothing short of a flawless performance with enough antics and musical brilliance to crave the eventual return of the “World’s Greatest Band” to Victorian shores. Higgo does it again with another fantastic line-up and a bloody spectacular night to match!

Check out each band that performed on the night by heading over to their Facebook!

Be sure to catch the next Higgo’s Heavy Cherry on the 16th of December, as Melbourne’s melodic death metal titans Orpheus Omega headline the night, supported by heavy veterans Dreadnaught, Adelaide’s Se Bon Ki Ra and Shellharbour’s Saralisse.

PrevPrevious.[LIVE REVIEW + PHOTOS] The Used, Storm The Sky and Corpus, Melbourne, 21st Nov
Next.[ALBUM REVIEW] DEVILSKIN: Be Like The RiverNext