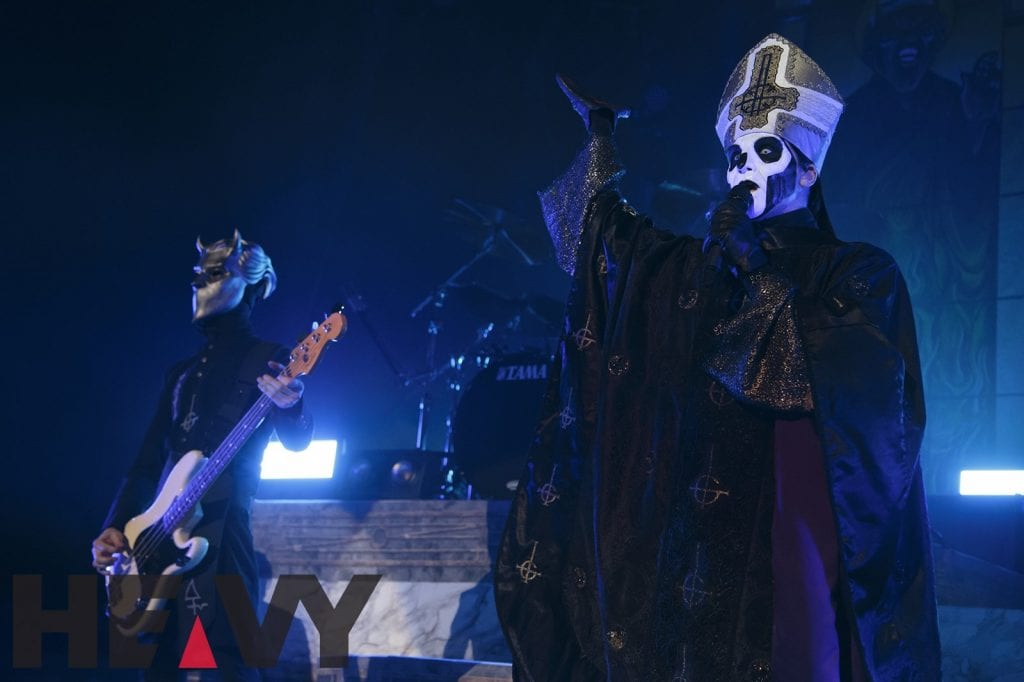 [vc_row][vc_column][vc_column_text]An offer you can’t refuse really, t would be rude not to, although checking the venue bars you may have been ultimately disappointed in their selection of specialist Satanic-themed beverages–a £4 can of regular lager in a plastic pot proving the more judicious alternative.

From the pre-show build up of incense and choral incantations of Gregorio Alegri’s ‘Miserere Mei, Deus’ all the way through to the anthemic encore of ‘Monstrance Clock’, Swedish dark but genial rockers Ghost provided nothing short of spectacle and entertainment value. The tone established in the build up by a solemn undraping of the drum and keyboard set ups standing atop the marble effect riser, in effect the altar, it wasn’t long before the revelation of a set of illuminated stained glass effect backdrops provided the final piece to the dramatic scenery. Adding to the visuals, a relentless billowing smoke, frequent bursts of CO2 from the stage front blocks and the odd explosion of flames at the back, it must have required a health and safety warranty and risk assessment of epic proportions.

Of course, there’s the band decked out in black, their faces disguised by disturbingly mouthless masks. Oh, and what looked like the very rock and roll footwear of spats. The latter possibly the biggest indication that behind those masks, Ghost has their tongues firmly in cheek. Taking turns to mount the front of stage blocks or walk up the stairs leading to the rear catwalk to deliver their set pieces, the five-piece band presented themselves as the foil for the ominous presence of Papa Emeritus III, emerging from a cloud of smoke to conduct the masses and deliver the vocal incantations Ghost work into a rock format. It’s something less portentous than imagined, the Ghost sound actually less metal and more accessible than anticipated and despite the antichrist flesh and blood implications, a pair of Sisters Of Sin went walkabout in the photo pit distributing who knows what – but you could guess it was probably nothing more rock ‘n’ roll than Vimto and digestive biscuits.

The carnival keyboard runs of ‘Square Hammer’ and ‘Secular Dust’ in the opening sequence gave way to a set built round ‘Infestissumam’ and the more obvious highlights of ‘Meloria’. Emerging from his vestry free of the restraint of the papal robes a few songs in, Papa then owns the stage like a cross between Freddie Mercury of the ‘I’m Going Slightly Mad’ period and a more subtle version of ‘Let Me Entertain You’ style Robbie Williams. The Grammy-winning ‘Cirice’ followed by the flame throwers in ‘Year Zero’ are part of a short run where Ghost hit a set of peaks with ‘He Is’, ‘Mummy Dust’ and ‘Absolution’.

The Latin chants of, “Con Clavi Con Dio” add substance to the Ghost ritual which is peppered with plenty of showcase moments – possibly choreographed – and visual set pieces; one in particular where the three axe players all congregate downstage might remind older viewers of a Status Quo styled three in a line rock out. Inevitably ‘Monstrance Clock’ provides the communal coming together in the encore place with Papa likening the inevitable gig closer to “What better way of ending than an orgasm?” Who could argue?