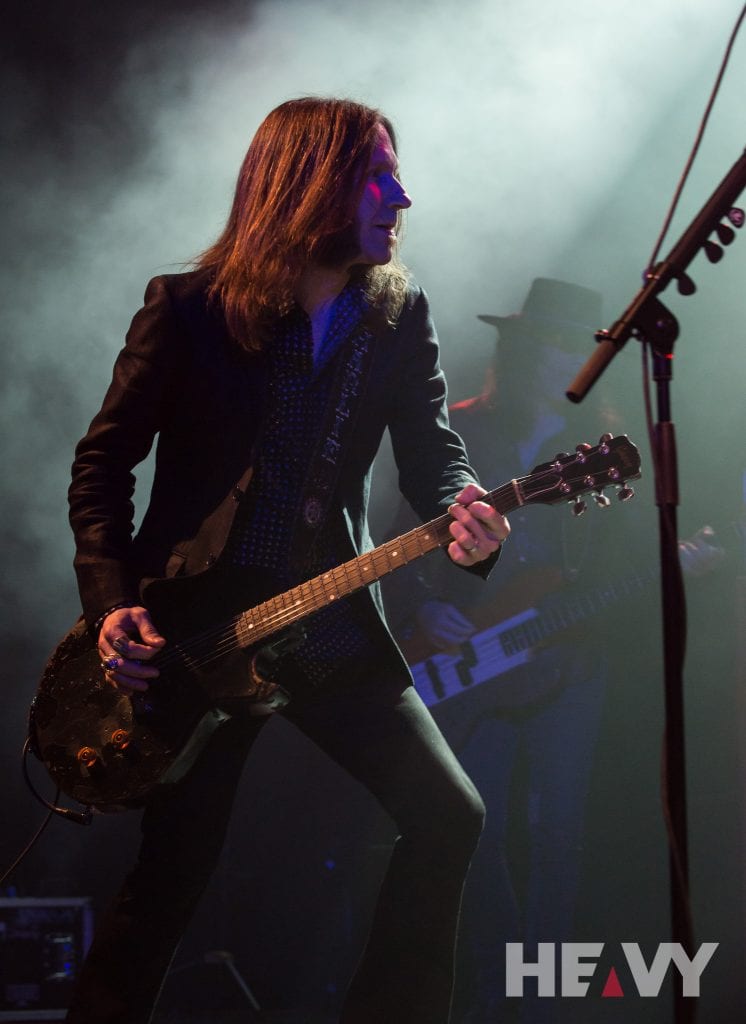 It’s 7.30pm on 31st March and Manchester Academy is slowly being submerged into a dry-ice haze. Particles of excitement and restlessness create a disturbance in this calming fog, as tonight the Academy houses a crowd that is ruthlessly inpatient for Blackberry Smoke’s appearance. Maybe it’s the incline in heat that Mancunians are recently succumbing to after winter hibernation, but the baying of the hounds is certainly turned up to eleven tonight.

Occupying the support slot were the latest emerging cool kids in rock’n’roll, Biters. Opening with Restless Hearts, Biters held nothing back in letting rip their fresh yet delectably vintage sound. A bubbling brew of glam, punk and hard rock that’s a far cry from the neo-southern genre Blackberry Smoke have concocted, Biters were a sharp divergence from what one might have expected of a Blackberry Smoke support act. Nonetheless, it was clear that the audience sunk their teeth into Biters’ crisp and crunchy sound, as confirmed by the unprompted howls of approval that spread throughout the audience like wildfire.

However, there were a few members of the jury that were keen to send Biters straight to the gallows pole, as signified by their hostile taunts of “you suck!” Frontman Tuk Smith even had to stop the show dead cold during Heart Fulla Rock’n’Roll in a (successful) bid to break up a violent tussle in the audience. This was met with elated applause from the crowd but also with vocalisations of hate from the perpetrators in question. In natural frontman style, Smith remained seemingly unfazed and continued the gig with all the heart-filled rigour he could muster.

Unfortunately, the hate did not stop there, with one audience member insistent on his outward labelling of Biters as “childish”. Childish is one word you could use to delineate Biters, but only if you were referring to their beautifully executed rebirth of rock’n’roll. The strength, soul and sweat Biters affixed to their musical performance was commendable. Their live music shone in ways that have not yet been encapsulated in their studio albums, especially on tracks like Going Back To Georgia and Low Lives In Hi Definition. Such music magic could only possibly be captured in a genie lamp, of which music technicians at the likes of Bose and Apple are yet to develop.

After the turbulence of Biters’ set, it was a relief to be met with the juxtaposition instilled by the calming aura of Blackberry Smoke, with especial credit to guitarist Paul Jackson’s eternal grin of sunshine. Starting with Fire in the Hole, Six Ways To Sunday and A Good One Comin’ On, Blackberry Smoke created a richly textured ambience that suitably replenished the gaping chasm carelessly left by The Black Crowes’ separation a couple of years back. Blackberry Smoke offered a warmth to their performance that left one feeling safely nestled within the nook of rock’n’roll, inciting a sense of untouchable sanctuary for an hour and a half.

A sudden twist in the set with the powerful Waiting For The Thunder, however, grabbed us all firmly by the balls. Starr’s vocals were sheer perfection. In fact, the whole band was faultless, which is not a statement to be taken lightly within the realm of live music critiques. It was easy to find oneself withholding from breathing so as to lessen any infiltration of external sound that might have contaminated Blackberry Smoke’s seamless sound waves.

Sleeping Dogs was a particular highlight of the set, a combination of gentle twinkles, hostile lyrical undertones and cheeky, nippy riffs that melted into a cover of Led Zeppelin’s Your Time Is Gonna Come. This then transitioned into a jam that elicited outerbody-esque listening. Brandon Still’s ivory tinkling soared the music to dizzying heights of glory, whilst Starr brought an incendiary level of soul to his vocals.

From the deliciously relentless bassline of Up In Smoke to the onomatopoeic glimmers of Sunrise In Texas, the gentlemanly Blackberry Smoke wowed from all ends of the rock’n’roll spectrum. As indicated by the mass of booing instigated by a premature lighting up of the venue prior to their encore, Manchester will be sure to gleefully welcome back Blackberry Smoke with open, adoring arms on their next UK tour.