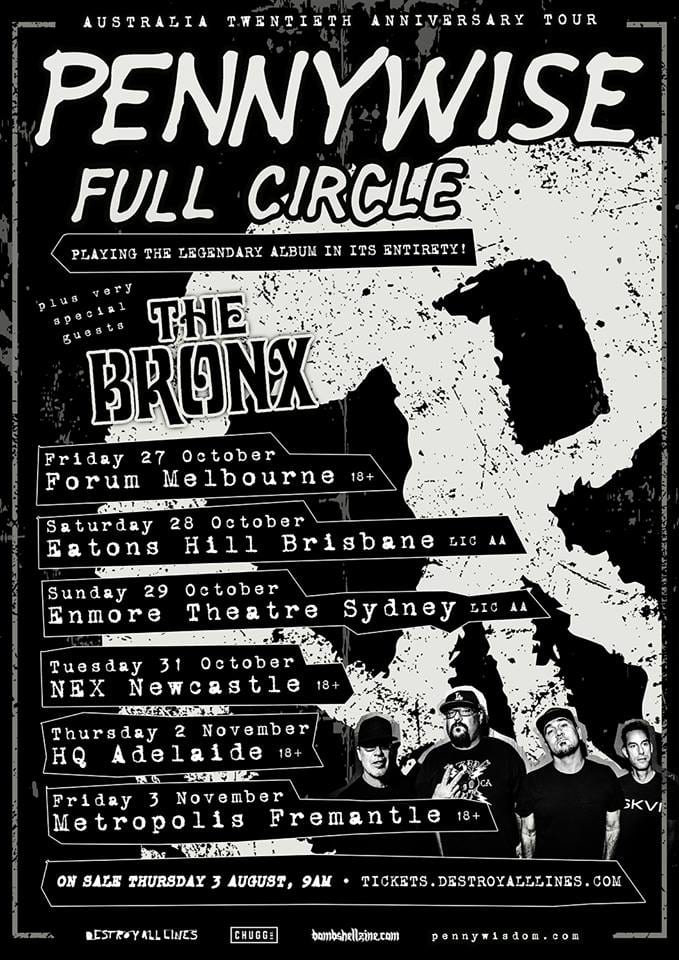 The Enmore soon filled up like a Centrelink Office on payday, with crazed fans rubbing their hands together at the merch stand, others racing to secure a spot on the barrier or stumbling from the bar to their seat of luxury upstairs.

Beerwolf from Sydney was up first, sharing their style of good old Aussie Punk Rock. It didn’t take long to show how tight the musicians were and the Redfern locals had their punk banter in between songs down pat, lending from a page or two from those known for their comedy routine, with the likes of NOFX and Me First and the Gimme Gimmes. “Our bass player Adrian wrote this song about doing meth,” we were informed until we get the title, “Regrets”, which then made more sense. SAY NO TO DRUGS KIDS!!!

Mostly concentrating on their latest offering, ‘Post Youth Crisis’ (2017), which was conceived only a week ago with fresh songs such as “They won’t believe what happens next” The song itself was a conundrum of sound; one minute focusing on the poppy side of punk then straight out hardcore played in the style of 12 bar blues.

Adrian lets us know how stoked the lads are to be the opening act, giving the humorous comparison of how “wanking in front of the mirror at the age of fourteen isn’t as cool as supporting Pennywise at the age of 35. Life doesn’t get any better than this.”

Pummeling drums and bass. Hardcore infused riffs and hard hitting breakdowns. The aptly titled “Eat Shit or Die!” is a good example of what the Sydney-siders have on display. The highlight of their set, however, was their cover of The Misfits classic “Where Eagles Dare” which tore the roof off the venue.

Beerwolf did Sydney siders proud with a stellar support to represent their sometimes city of Shitney!

Changing it up in both style and sound were first international supports, The Bronx from Los Angeles, California. Lead by frontman Matt Caughthran who was full of beans tonight. The dual guitar of Joby J. Ford and Ken Horne was the equivalent of lightning striking down in a violent storm, with the pummeling bass of Brad Magers and the force of the beast behind the kit David Hidalgo, Jr. who provided the thunder, making it hard to take your eyes off the mans precision when it came to beating the skins.

Opening the set with “Sore Throat” taken from their latest effort ‘The BrVnx’ (2017) before Matt makes his way to the crowd for the second song, “Heart Attack American” from ‘The Bronx’ (2003), the debut LP.

Spending most of his time amongst the crowd of pumped up pumpers breaking a sweat with fans is the way Matt rolls. Post-hardcore to at times Jet- like rock tunes, with a good set of pipes and one fine rock voice this vocalist is full of surprises. Referring to the Seven days of creation with, “The first day the Heavens were created, second day, man and women in his image, 3rd Australia… 5th Enmore Theatre. 6th Beerwolf, The Bronx, Pennywise and on the 7th day this event here tonight,” which pumped the crowd for the highlight of the set with, “Knifeman” taken from the third opus, ‘The Bronx’ (2008)

Other standouts included “Broken Arrow” off the latest LP, “They Will Kill Us All (Without Mercy)” from the debut and “History’s Stranglers” from the second closing one tight set.

Hermosa Beach heroes of skate-punk, Pennywise would tonight make history with Australia being the first country to hear the entire ‘Full Circle’ (1997) album in its entirety from start to finish and from front to back as lead vocalist Jim Lindberg puts it. Proving the band hasn’t slowed down it was as if they were playing tracks at a faster speed than the original recordings, instead of slowing down they reversed the cycle coming at full force or ‘Full Circle’, pun intended!!!

Gems like “Date with Destiny”, “Final Day” and “Broken” were absolutely nailed with the defining bass groove of Randy Bradbury welcoming “Society”, a song which resonates still to this day. As there is not a dud on this album, tracks such as “What If I?” and final song of the record, “Did You Really?” were also highlights. Jim explained how that ended the’Full Circle’ set, and how he enjoyed a meat pie today and he thinks he may have shat himself but it didn’t matter as it was “awesome”

Eager fans didn’t have to wait long as the band went straight into, “Same Old Story” taken from the fan favourite, ‘About Time’ (1995). Jim asked fans if they were fans of Circle Jerks, to cheers, as he received more to the likes of Black Flag, Dead Kennedys, and Pennywise as happy punters eyes lit up to the self-titled track to the debut LP, ‘Pennywise’ (1991)

A Circle Jerks cover was first to be heard tonight with “Wild in the Streets” seeing the light of day. Long-time drummer, Byron McMackin pulverized the kit never missing a beat from the get-go to the final note was played. Changing the setlist from previous states such as our Melbourne rivals, it was good to hear”As long as we can” taken from ‘Reason to Believe’ (2008)

The big man Fletcher Dragge surprised Sydney siders with the distinct riff of AC/DC’s “TNT” which was played tonight mixing things up rather than playing the usual “Down Under” cover of a Men At Work original. Following up with the sing-a-long of Ben E. King’s, “Stand By Me” before set-closer with the absolute Pennywise anthem, “Brohymn” which saw members of the crowd run up on stage to be closer to their idols, making a hard job for security on a Sunday night.

Pennywise proved tonight why they are one of if not the most important current day punk rock outfits, with Australia their home away from home, let’s hope a new album is on the way including a trek Downunder!