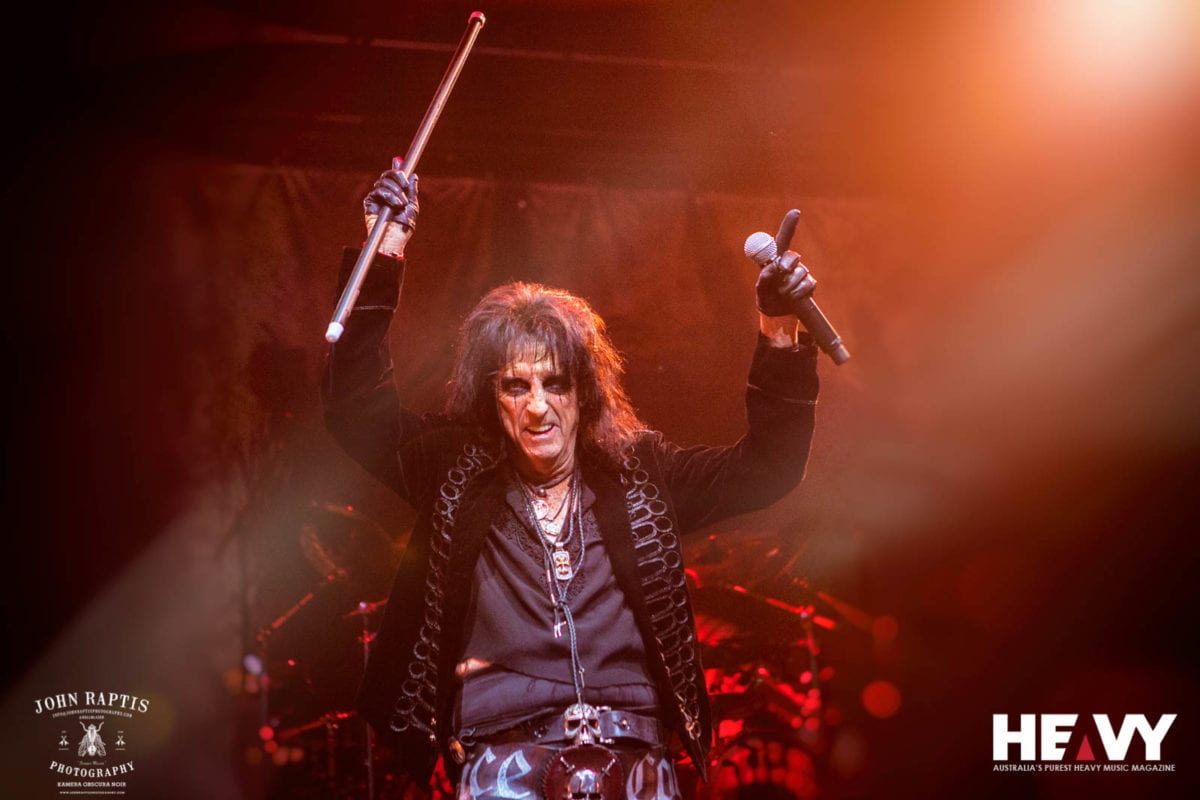 Like many people my age – my first real introduction to Alice Cooper was 1989’s album Trash, altho I’d long known the song Schools Out I knew very little of Alices’ exhaustive back-catalogue – the discovery that Trash was album #18 was astounding to me, and just didn’t compute. With a new, modern sound from producer Desmond Child – Alice was back transformed from a now dated 70s sounding shock-rocker to modern day hard rock/heavy metal icon.

The followup album Hey Stoopid continued the new MTV friendly sound but for me, it was 1994’s The Last Temptation which really captured my attention – a questionable change/return of faith, along with a concept album steeped with lyrical “is he, isn’t he” possibilities that also came with a vivid, visual graphic novel that queued up a lifetime of debt from buying comics and music…

Since then, Alice Cooper has released a further 7 albums with the 2017 release Paranormal being #27 and if tonight’s performance is anything to go by, the 69-year-old rocker shows no sign of slowing down.

It’s been 8 years since I last (and first) saw Alice, then for The Theater Of Death show at the Auckland’s ASB theatre – to say I’m a more than a little excited is to belittle my mood..there’s just something about Alice. It’s a slow start to the evening, my first time at The Trust Stadium for a gig, the atmosphere and excitement is seemingly flat when compared to that often seen at Spark Arena and…the venue is seated – I suspect this is largely responsible for the mood, lots of people sitting already whilst the venue is still half empty…

First up is Australian act The Strangers – the lights dim and drums and strobes burst into life – we’re off.. I don’t really know anything about the band but straight off I’m impressed with some nice harmonic feedback winding its way thru riffs and solid, straight ahead hard rock, nothing fancy, but well-executed rock and roll.

Now it’s time for special guest Ace Frehley… I was never much of a KISS fan, they were just a few years before my time and it never really clicked with me, and unfortunately, Ace’s solo career never seemed to garner mainstream attraction down here in New Zealand – so I’m largely unfamiliar with tonight’s offerings. A giant “Ace Frehley” backdrop fills the stage – as if to remind the audience whose actually playing, the lights dim, an open chord rings out and from off-stage a guitar solo sings out…as the intro dies down, Ace is awkwardly introduced by some guy running on, then off stage – and then it all begins…

First up is the classic KISS song Parasite, originally from “Hotter Than Hell” but also featured on Ace’s 2016 covers album “Origins Vol 1”. Kicking into a short drum solo before heading back to the songs main solos we’re treated to riffs galore. Unfortunately, where guitars and riffs are gold vocally I’m finding Ace a little in the murky brown, weak in the mix but also not all that clear either.

Moving thru Hard Times and 2000 Man, I get a sense we may largely be into for an ‘Ace era’ KISS tribute, good rock and roll, but unfortunately, that’s all it feels like, old songs that maybe that haven’t lasted well – or maybe it’s just my lack of familiarity failing me already?

Next up is Rip It Out, the nights first non-KISS track from Ace’s first, eponymous solo album in 1978. Whilst the band rocks on, the crowd is still largely seated, and seemingly apathetic to the band before them. Breaking out another KISS classic – Love Gun sees drummer Scot Coogan take on lead vocals as not only a sleeping crowd awakens, but an appearance of New Zealand’s infamous “dancing guy” can be seen swooping up and down the isles, spinning and strutting to a bemused audience as the whole tone of the evening seems to lift. I’m always impressed by drummers who are capable of singing whilst simultaneously pounding the skins, always an impressive feat.

Now that everyone’s getting in the groove we really need to move this show along, and what better way to do that than with a Rocket Ride – we’d led on a trip that leads us to bassist Chris Wyse’s solo – starting out sweet, slow, and full of emotive bass lines and falling into a dash of Sabbath infused groove before we continue our journey with Chris as he takes on vocal duties for Strange Ways – further iterating to me that Ace’s singing is the weakest link of the show – it’s like we’re being treated to multiple bands in one tonight and I dig it, Ace is not always in the line light – everyone in the band is seemingly equal…

Breaking out the LED lit Les Paul we’re treating to New York Grove – New York New York – so bad they named it twice Ace declares – but it wasn’t just the location that lacked, the crowd’s fallen back into their lacklustre state of being and as Ace calls the audience to sing with him multiple times, they just didn’t rise to the challenge – we move on to Shock Me, now with a guitar billowing smoke as he runs around – again it might just be my unfamiliarity with KISS/Ace material, but I have a sense we have these visual spectacles to distract us music that’s just not quite…. Ace is a phenomenal rhythm guitarist and a capable lead player, but those leads just don’t grab me, thankfully we close out the set with Detroit Rock City, which gets a good portion of the crowd riled up – but alas, most were still seated.

Now it’s time for the main event – The Show Man is here and I’m ready for a paranormal ride thru his nightmare, leading us down to hell, and hopefully back again…

As the backdrop of “The Eyes of Alice Cooper” rises from the floor, the lights drop, fireworks explode, Alice Cooper is here and as we launch right into Brutal Planet – instantly the crowd is on their feet as tho they were just biding their time. There’s an energy here the polar opposite to moments before – not just from the thundering riffs and pounding bass, the whole place is alive.

We jump back in time to No More Mister Nice Guy, something new, something old – much like the those in attendance, the music and crowd span multiple generations, but everything feels fresh. Whilst Alice himself casually floats around the stage – Nita Strauss, Ryan Roxie, and Chuck Garric are everywhere – back and forth from corner to corner, making sure everyone up front gets a night they’ll never forget.

The backdrop seamlessly changes for Department of Youth and again for Billion Dollar Babies as we work smoothly thru a list of hit songs, stage props and costume changes every so casually provided by a mysterious figure in a dolls box. Coming back to newer material, we have Woman of Mass Distraction from Dirty Diamonds leading into Nitas’ solo – lights pulsating to an intro riffs as the crowd slow claps to a crescendo – seemingly without effort she smoothly mixes passionate, emotional playing mixed with blistering licks, I hate to say it but there’s no comparison between to Ace here – Nita wins hands down, as the solo winds dine I hear the hint of a familiar riff, and tone – it’s kinda hard to describe, but sure enough – Poison!!!! Anyone who wasn’t standing sure was now… Halo of Flies from Killers is up now, an album I’m not totally familiar with, midway thru Alice has left the stage as the band plays on, soon only drummer Glen Sobel is left to run riot with a drum solo whilst Chuck Garric lends a bass line to keep things flowing. As impressed I am with drummers who can sing, I’m equally impressed with those who can play whilst insane strobe lights constantly flash around them… and band emerges again and we’re all up on the centre pedestal as everything reaches a climax… then drops away to darkness.

Alice emerges in a bloodstained doctors coat and we launch into Feed my Frankenstein as the crowd goes into another frenzy. An electric chair transforms Alice to giant Frankenstein monster running around on stage and I’m glad to see we’re actually getting some theatrics along with tonight’s show.

The tone shifts as we move thru Cold Ethel, Only Women Bleed, Paranoic, and The Ballad of Dwight Fry until the guillotine arrives… off with his head – for I Love The Dead.

By this point, as the show is nearing its end – I’m far too engrossed in actually enjoying the show to take coherent note of everything that’s happening, Alice is dead, his head’s being thrown around the stage and… HE’S BACK and we’re off again for the final two songs – I’m Eighteen and Schools Out mixed with a side of Pink Floyd’s Another Brick In The Wall brings everyone to their feet for what was one of the best shows I’ve seen in a long time ( 8 years maybe? ). Here’s hoping it’s not another 8 until the next time Alice comes to town…

PrevPrevious.Live Review: PENNYWISE and The Bronx at the Enmore Theatre, Sydney on 29/10/20117
Next.Live Photos: LESS THAN JAKE and BODYJAR at Prince Bandroom, Melbourne on 19/10/17Next