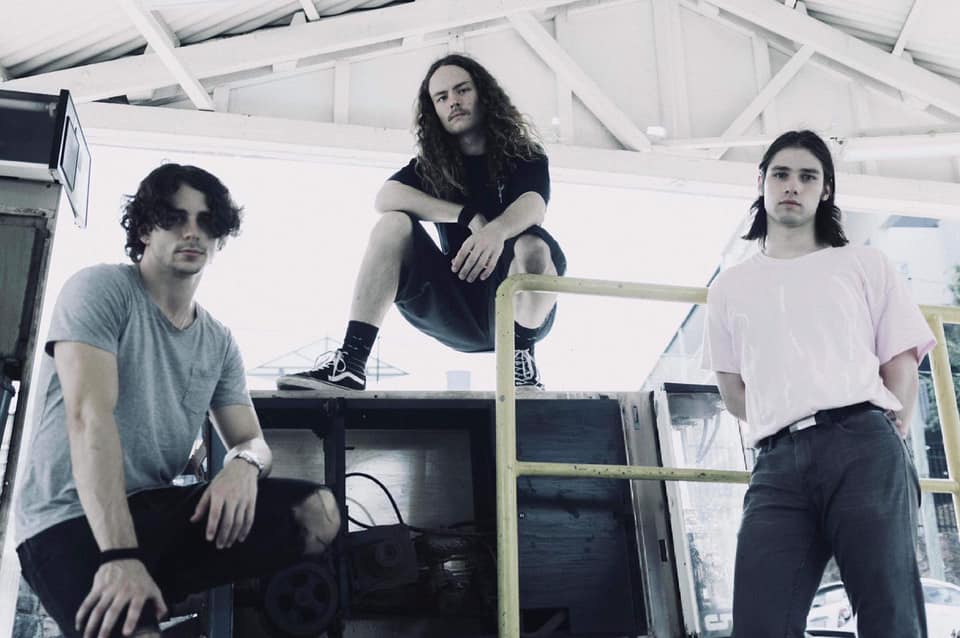 Oh, it’s so exciting.  I’m fanboitastic at the Brightside on a Sunday night.

I’m so keen for tonight that I’ve invited international upstart to the stars, Lewd Scoff, to fart his 5c worth.

Stereo is pumping everything it should for an event such as this. Pantera, Alice In Chains, Stone Temple Pilots et al.

Nonberk are headlining, as they launch their new single “Hypnotise” on all the streamers.

Supported by SOAP and Dark Moon Society, this is an interesting gig.  In one way, it’s like the hazy late 90s were just a myth and the glorious sounds of the 1st half of that decade have been reappropriated by today’s youth and embraced by those in the know.

I shall complain about the sound in this club only once.  ‘OK Boomy’. ‘Fine then Muddy’.

SOAP slowly sink into their groove and by track two, which has a hypnotic verse riff, ironically wakes the audience up. Very sexy.

By the fourth song, I’m convinced that this band are great songwriters, and just need to cut their teeth live a bit more.

The set closer is strong proof of this.  Dreamy yet urgent, Abrupt yet focused. Watch this……… band.

Another band fresh to these ears, The Dark Moon Society, will provide the halftime entertainment in tonight’s three-point contest. Oozing with confidence, the lead guitarist launches into the sets opening riff.

A classic rock sound played by a tight band with an exceptional drummer, compliment the singers in the pocket tone as they lay bare a solid set of extended jams, including Queens Of The Stone Age belter “Song for The Dead”.  Ageless inspiration.

Lewd’s Scoff: back in the day, alternative rock was considered the main form of male birth control.  But the rooms full of non-blokes and there’s more rock than Gibraltar.  Zing on.

Last time, (which was the first time) I’d seen Nonberk, was here at the Brightside, and it was in support of Amicable Treason and Odius.  These bands are super heavy and place high on the metal scale, and I’m thinking that’s why Nonberk’s Harry had such a high gain guitar tone with scooped mids. Metal tone for a metal gig.  Let’s just say at that show, the guitar was lost in the mix and the room did not do our young heroes justice.

I’m really hoping the guitar is as raw as it is on the self-titled album, of which I’ve worn out this month in the car (true story.  Had to buy a new copy tonight as the other one is scratched to shit).

And bang!!!!!! It’s on.  The tone is tolerable, the band is on point, and the crowd is upfront and rocking. So into it that a string broke.

But album highlight “Indolent”, rectifies any technical delays. “Wildfire” comes across all in your face like, and has the crowd bouncing to the killer groove. The high chorus has Zaac reaching breaking point.

Harry is having more issues than Kid Zone and Readers Digest combined, but still manages to bend our minds with yet another killer solo.  On point.

Time for a newy. Why the fuck not.  That’s what we’re here for.  New original rock that kicks ass. Yep. They provideth.

Another new song reminds us how present and aggressive Zaac’s bass tone is and how immediate his vocal attack is. Drummer Sam goes off like all the drummers have tonight.  Awesome sauce.

Final song of the night, “Hypnotise”, has its  ‘ladies to the front moment’ as all that’s missing is panties thrown at band.  As the trio finally seems to relax drop inside the pocket, I fear is all come to an end too quickly.

And no, despite the chant for “one more song” by the now inebriated crowd, it’s all over.

Rock is alive and well, and in good hands.

Lewd’s Scoff: Yeah nah.  That guitar tone needs addressing.  Should be easy fucking louder and in your face.