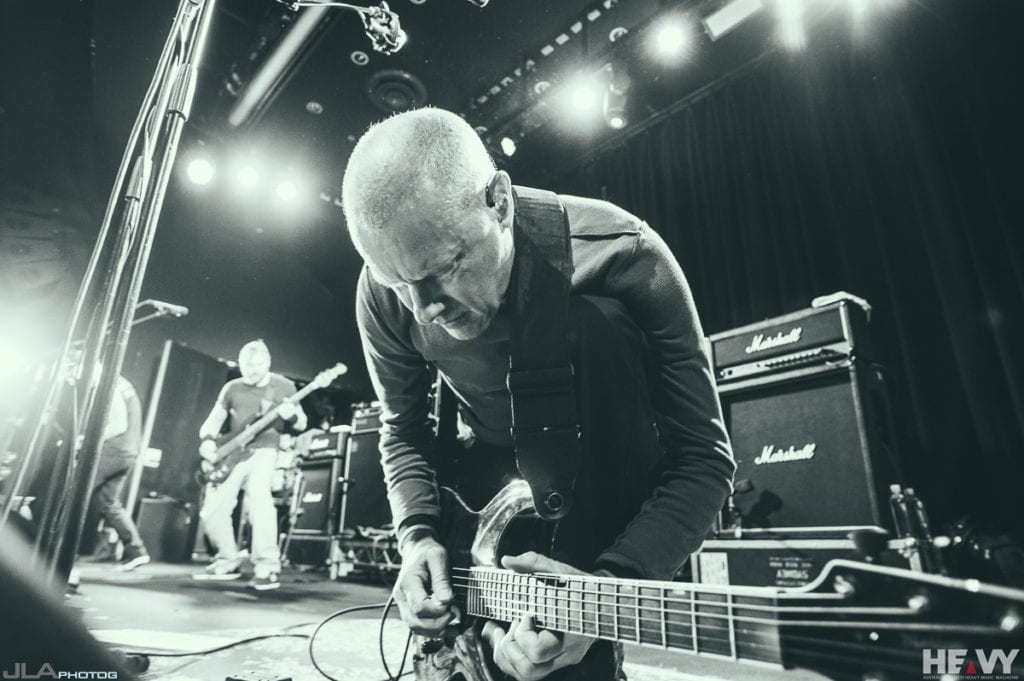 When Page Hamilton first formed Helmet back in 1989, I don’t think anyone could have foreseen then band’s longevity, or the influence they would have on heavy music in the years that followed. Almost thirty years later, in defiance of several line-up changes, the band recently released album number eight, Dead To The World, and are back on our shores to pulverise us with their power once more.
Despite the new album, this tour is a celebration of the twentieth anniversary of the band’s 1994 LP, Betty, and the majority of the show will be dedicated to playing the album in full.
With no supports on the bill, a decent crowd had gathered out the front of the venue before the doors had even opened, and by the time the band came on, the Manning Bar was as full as I’ve ever seen it.
Will little fuss or fanfare, Helmet simply walked on stage and began to play, with that familiar, catchy riff of Wilma’s Rainbow bringing everyone to life. There was no interaction between band and crowd during the entire Betty album. They went from song to song, with an appreciative cheer in between each, and in this age of streaming, downloading, and extremely short shelf life, it’s easy to forget just how good this album is. Whether it’s the upbeat, catchy riffs of Biscuits For Smut and Milquetoast, the raw aggression of I Know and Tic, the powerful, crunching rhythm of Street Crab, or the completely left-field Sam Hell, Betty stands up to any of its contemporaries.
Playing the entire album is also a great opportunity to hear songs that often don’t make the set list, and tracks such as Clean, Vaccination and Speechless all got great reactions from the crowd.
At the completion of Betty, the fans cheered loudly, and Page finally began to speak. He introduced the band and told a couple of funny stories. After a short break to catch their breath, the guys began to play a second set, which drew largely on the band’s newer material, while at the same time, not completely ignoring the back catalogue. New tracks Life or Death, Bad News, Drunk In The Afternoon, and Red Scare went over well, as did old favourites You Borrowed and Better from 1992 killer Meantime, and On your Way Down from the Monochrome album.
They left the stage briefly, but returned to blow everyone away with six encores, with the best of them being the mosh-friendly Unsung and Just Another Victim, while In The Meantime was the furious finale.
Even though the original line-up dissolved long ago, this current incantation of Helmet still has some serious chops, with tonight’s show lasting for just under two hours, and never wavering in intensity. The new album also gives younger fans a chance to discover one of the most influential bands of the nineties. I don’t think Helmet are going away anytime soon.

PrevPrevious.[GIG REVIEW] DWARVES and Supports at The Imperial, Hotel, Erskineville, Sydney
Next.[ALBUM REVIEW] BITERS: The Future Ain’t What It Used To BeNext