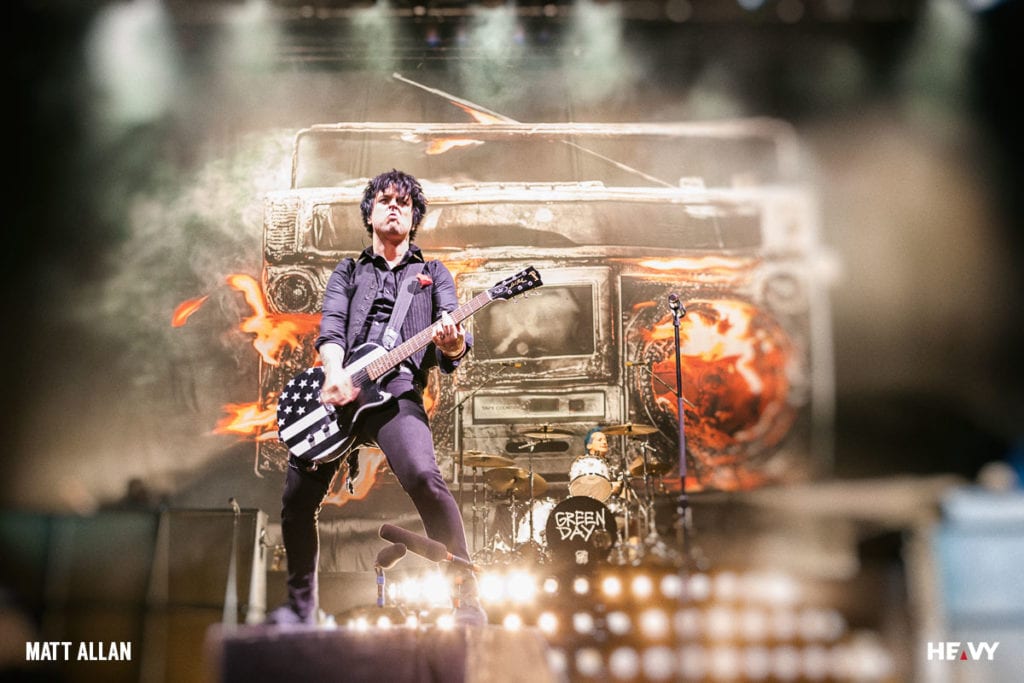 If the true measure of how a gig has gone for a band is from the reaction of the audience, then Green Day delivered one of the best damn shows that Melbourne has ever seen last night. There were times last night that the Rod Laver Arena crowd erupted with a cheer that Melbourne normally only reserves for an Essendon vs Collingwood game. Last night a sporting stadium that is normally used to worship tennis greats like Roger Federer or Serena Williams became a church to modern punk music, and Billie Joe Armstrong was the deity the congregation was there to worship.

To their credit, Green Day have spent thirty years amassing this army, and it showed. The band are now in that rare realm where there fan-base is multi-generational. There were the 40 nearly 50-somethings that would have discovered the band during their Dookie and Insomniac days, there are those in their 20s that were probably introduced to punk music by the Green Day juggernaut that was American Idiot and then there were the 14 and 15-year-olds who have be won over by Green Day’s newer albums like Revolution Radio. Of course, that thirty years in the business also means that the band now have a fair back-catalog to work through and they certainly didn’t disappoint last night giving the audience a little bit of something from each phase the band has been through.

Perhaps the most satisfying thing about the night is it is so refreshing to hear a modern band that aren’t afraid to be political. In a time where rap stars crap on about bling and pop stars sing about getting laid it was refreshing to hear a band take the stage and try to unify their crowd and make them one and have the guts to stand in public and say ‘F**k off Donald Trump’… a sentiment that was proudly repeated through the night.

As a band, Green Day delivered the perfect all-round show. Musically they were absolutely on song. Of course there big hits like American Idiot, When I Come Around and Longview etc. had the audience singing along, but you know this was a night that the real Green Day fans had come out to play when the band went right back to their old school days and delivered 2000 Light Years Away from Kerplunk, and the audience still knew every damn word… that to a hardened Green Day like myself was very, very impressive.

The highlight of the night musically though was the fact that Green Day repaid their loyal fans with a setlist that boasted 25 tracks and that meant that we got to hear some of the ‘longer’ tracks from American Idiot… tracks that I’ll admit are some of my favourites. While I was impressed enough with Boulevard Of Broken Dreams and Holiday, it was the haunting renditions of Are We The Waiting, St Jimmy and Jesus Of Suburbia that are going to stick with me for a long, long time. Hearing a packed Rod Laver Arena sing-a-long to those tracks is something that is going to stay with me for a long, long time.

The band also managed to win me over with their live versions of their newer tracks as well. Even as a Green Day fan it has taken me a while to warm to the tracks from Revolution Radio but bloody hell they won me over last night. Bang Bang, Revolution Radio and Still Breathing revealed themselves to be tracks that are a lot better live than what they are on a static CD listen – although I get the feeling now that I will never be able to listen to them without thinking of last night… and that will bring back some pleasant memories.

This was a night though that also saw the band try to do things a little differently as well. Getting fans on stage to help sing and even play guitar (and then walk away with a guitar) saw a connection form between band and audience that is rare these days. Billie Joe also had little conversations with crowd members and while they were things like ‘you look sad… are you sad?’ it did show that this is a band that wants its audience to feel like they are part of the show.

Musically Green Day also experimented a lot as well. A slowed down medley of Shout/Always Looks On The Bright Side Of Life/(I Can’t Get No) Satisfaction/Careless Whisper/Hey Jude was the last thing that you would expect at a Green Day but bloody hell it worked, while returning for a second encore that consisted of acoustic numbers like Ordinary World and Good Riddance (Time Of Your Life) was extremely brave seeing it could have left the audience flat after such a high energy show. Luckily it didn’t because once again the crowd sang along to every single word.

Green Day showed Melbourne a lot of love last night – Tre Cool showed why he is one of the best damn drummers in the business, Mike Dirnt was a true showman and really endeared himself to those of us right of stage while Billie-Joe Armstrong was a pocket rocket all night to the point that he nearly broke his neck when a jump went horribly wrong. Yes, Green Day delivered a show for the ages last night, and I’m just thankful that I was there to see it.