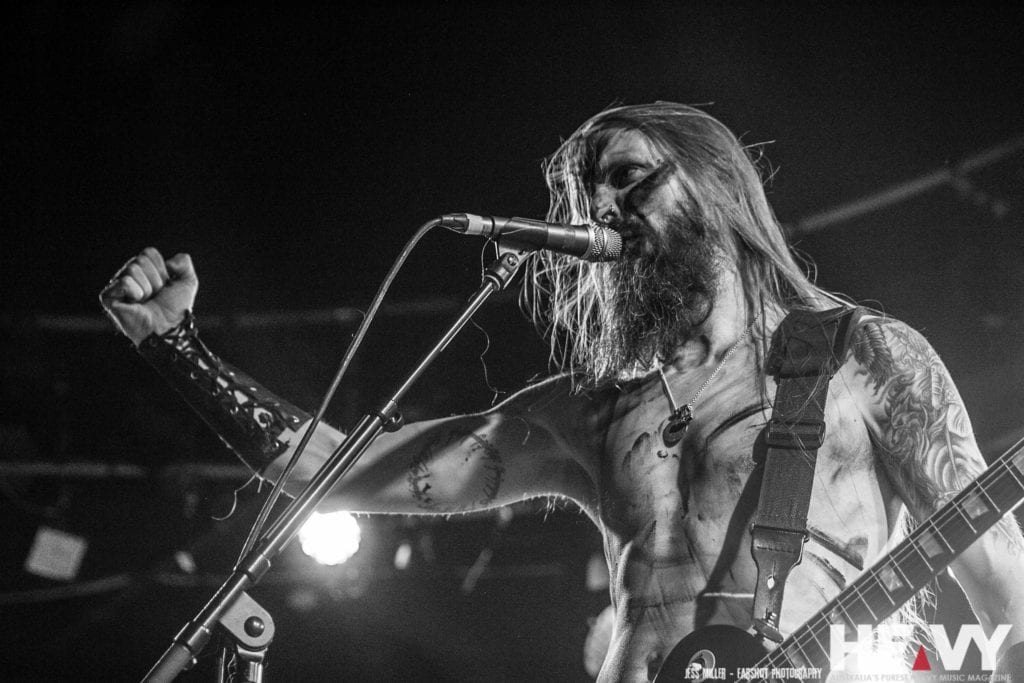 Max Watt’s was the venue for tonight’s celebration of Black / Thrash metal.

First up, Sydney four-piece Bastardizer. They warmed the small crowd up with their dirty blend of “black thrash & roll”. Their set consisted of songs from releases Enforcers of Evil and Strike of the Bastard, including Death Cult, Bathory and Lust, and Enforcers of Evil. With each song, the crowd seemed to grow, and the cheers got increasingly louder. Demons Unleashed got the punters in the front row moving and headbanging, while set closer Up the Ante was the highlight, with a killer thrash riff, and ripping solo from guitarist Bill Morgan.

Next up, Canberra thrash metal three piece, Hellbringer. These guys have an old school sound that is somewhat appealing to this old headbanger. They have recently released a new album, Awakened From The Abyss, and they blasted the growing crowd with some of the new songs, including the title track Awakened From The Abyss, Iron Gates, and Dark Overseer, which all got cheers of approval from the congregation.

Hellbringer threw in some older tracks too, such as Deceiver’s Chamber, which instigated some windmill action from some of the long-haired patrons, and Sermon of Death, which was also well-received.

With the room filling, local war-metal-warriors Bane Of Isildur took to the stage, and drew the audience in with their Tolkien-inspired tales of war and triumph. While their music does contain elements of thrash, they are not a thrash metal band. Their sound is heavy, loud, and original, and tracks such as The War of Gods and Men, 1066, and Furious Hunt had the punters headbanging and fist-pumping.

Despite relocating to Europe in the early 2000’s, Destroyer 666 will always be considered an Aussie metal band, and the boys were greeted with a raucous cheer and plenty of raised fists and devil horns. Opening with Rise of the Predator from the Phoenix Rising album, the guys instantly whipped the crowd into a frenzy with their signature fast, thrashy sound.

The band are touring on the back of their latest album, “Wildfire and the title track, as well as Traitor and Hounds At Ya Back, went over well with the fans.

The band was undeterred by a couple of slight technical issues with front man K K Warslut’s gear, and belted out some of the back-catalogue as well, including I Am The War God, Sons of Perdition, Trialed By Fire, and Lone Wolf Winter. They even threw in a tribute to Lemmy, ripping out a cover of Motorhead’s Iron Fist.

They returned to the stage for the double-encore of Australian and Anti-Christ and The Eternal Glory of War, ensuring that the punters went home with sore necks and hoarse voices.

While a band such as Destroyer 666 may not be everyone’s bag you have to hand it to them, the technical aspect of their live show is flawless. This is one of the key reasons they have remained a force in the Black Metal scene for over two decades.

Live photos of Deströyer 666 at the Manning Bar, Sydney on Saturday, November 5, by Jess Miller