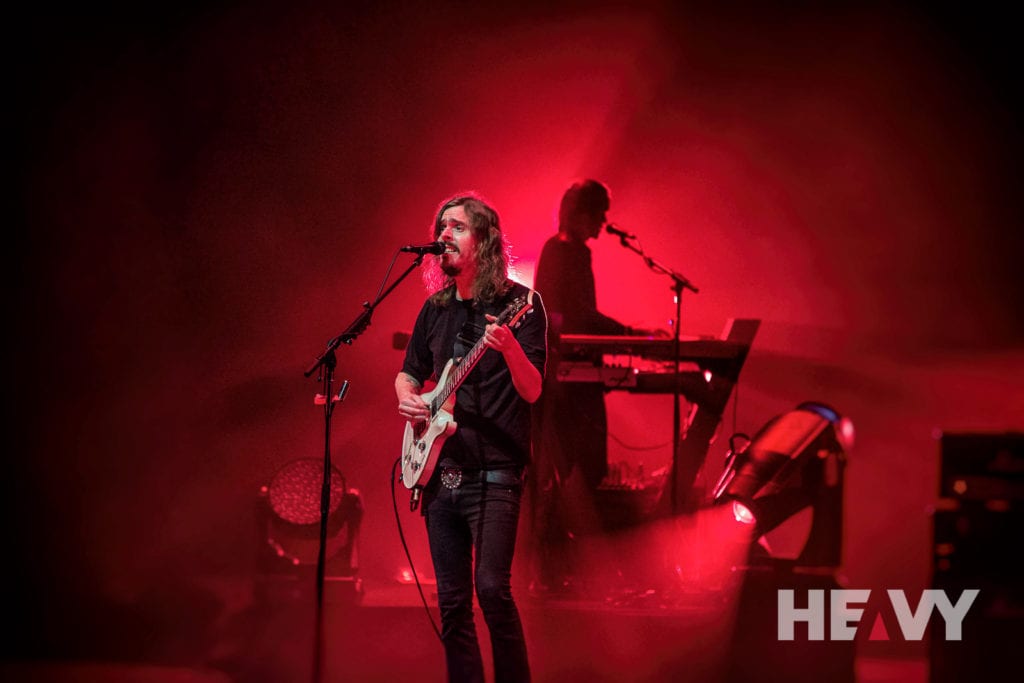 A sea of black took over Sydney Harbour as metal heads united in wait of our Swedish brethren who would make the Sydney Opera House their own for three hours of progressive bliss this evening. Opeth delivered the goods, firing off on all cylinders, kicking off with the progressive title track to their latest offering, Sorceress (2016). What followed was the first of many choice cuts, that being The Ghost of Perdition, taken off Ghost Reveries (2005). After the first growl of the night frontman Mikael Åkerfeldt, who was in fine form this evening made note that they were most probably the first death metal band to play at a venue such as what he referred to as The Sydney House. “Thank you Austria,” Åkerfeldt, often joked with the crowd. ‘This place wasn’t made for growls he stresses and was right.

The Swedes seemed to pull it off well. Although the instruments were louder, then they probably needed to be with the awesome acoustics the venue gives off. i.e. the kick drum seemed to be overly loud at times; Opeth was tight as always, the playing faultless. The first set to commence a night of sorcery saw two new tracks, the aforementioned title track and the heavy beat of The Wilde Flowers. Crowd favourites such as Demon of the Fall, off My Arms, Your Hearse (1998) and personal favourite Face of Melinda off Still Life (1999) went down well.

Before closing the first set with the last choice cut off the night, The Drapery Falls off the iconic Blackwater Park (2001), Åkerfeldt asks if the crowd were tired as they were only halfway through the night and the next set would be a collection of songs off Deliverance (2002) and Damnation (2003). The reason being ‘they got told to cos somebody thought it’d be cool’ and also because the records were to be reissued as a double LP.

The reason for the title of the softer yet darker Damnation, was due to the front-mans love of Altars of Madness (1989) being the greatest death metal record, according to Åkerfeldt, and Damnation being a track on this Morbid Angel classic. Death Whispered a Lullaby, a  track not played often due to writing credits held by Steven Wilson (Porcupine Tree), proved to be one of few highlights or ‘bonuses’ for tonight’s audience. The humble front-man apologises, ‘Sorry Steven.’ The key arrangements by Joakim Svalberg stood out during this set. Other bonuses included playing By the Pain I See in Others, for the Deliverance part of the set, which was a song the band never played testing it with the crowd, letting us know that this was one of four concerts that would experience this unique set, Sydney being the last.

One could not pass the reference to Australian, 60’s rock royalty The Masters Apprentices, due to the collecting of vinyl and the reason for the title of next track, Masters Apprentices. Ending with the title track, Deliverance the concert hall was taken on one last journey with the hypnotic force of Martin Axenrot, pummeling along on the drums to the frantic bass groove of Martín Méndez . The bone-crushing riffs of the  Fredrik Åkesson, Åkerfeldt combo shot tingles down the spines of fellow punters one last time. The comedy and the class of Opeth are endless, and the stereotypes and humour go hand in hand, quoting Opeth ‘as a well-known rock band that have to do what famous rock bands do, which is to have beers and do lots of drugs.’

Åkerfeldt explained how playing as many shows as they do they don’t feel like going on stage at first. Tonight is different however as he asks his fellow members if they are having a good time tonight. The response is a positive one as it is for us fans who had one night we will never forget. Anyone that was there had just witnessed what was metal history at one of our nation’s greatest landmarks. Long live Opeth. \m/