Life Through Music With ANDRE JOYZI 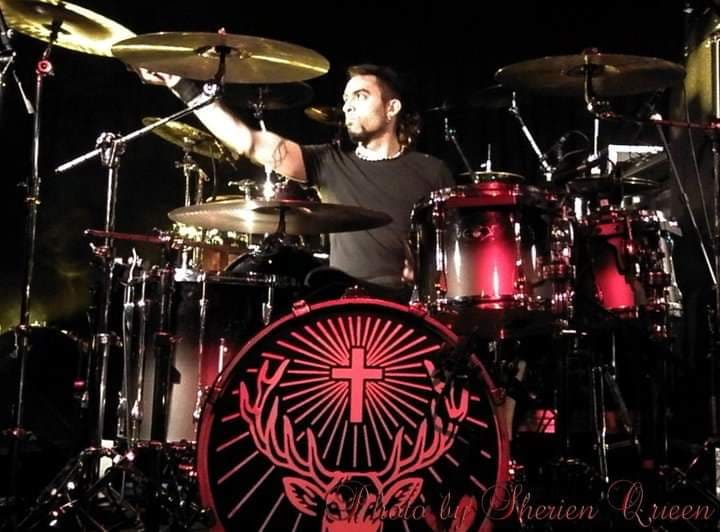 Late last year Australian audiences were introduced to U.K tribute band Chop Suey, performing, of course, songs made famous by System of a Down. It heralded a new era in this country, with fans flocking to each show and possibly finally putting to rest the public indifference to international tribute acts.

“That tour was fantastic,” enthused drummer and founding member Andre Joyzi. “I’m so grateful we got to bring a tribute band across the world to play in Australia. It was something I started doing about four years ago to fill in the gaps between my bigger international tours because I am also a roadie. Tribute bands are a fantastic way for me to keep active as a drummer and also I get to play songs from bands that I love. I don’t have to release an album or anything like that so it’s pretty cool (laughs).”

Joyzi is a man who lives and breathes his passion. From being on the road with successful bands as part of their road crew to touring with bands as their drummer, he has long believed in the notion that success is something that must be earnt and never taken for granted. He has played with, and for, some of the biggest names in metal, in the meantime constantly learning and growing as a musician and person. His work ethic and commitment is beyond reproach and should be the case study for any aspiring musician looking to turn their passion into their life.
“When I was 23 – I’m 37 now – I realised that if you want to be authentic and write your own music then your chances of making it as a professional are slimmer,” he said. “To me, the priority was to make it as a professional metalhead. I just didn’t want to be surrounded by normal people. Also, there’s nothing more I like doing than playing drums so I realised that if I was playing covers or playing in tribute bands or playing in originals bands, it didn’t matter. I decided to play everything that came my way which would increase my chances so that’s literally what happened. I’m probably never gonna be the drummer of System of a Down (laughs) but now I have five tribute bands and it never gets boring.”

Joyzi is best known as skinsman for Breed 77 who seemingly called time on their career just over four years ago, but he shakes his head when I suggest the band had played their last show.

“To be perfectly honest, the way it happened we never said goodbye,” he stressed. “We went to do the last show, knowing it was going to be the last show for a while, and we just… it’s weird because the band has been going for 20 years and obviously there are strong personas there. Everyone has their own and… again, we never said goodbye to each other. We all want to do it and we all love it and we talk to each other sometimes. We do want to get back together and do something but… we’re waiting. It is an awesome band and it would be a shame to not get back together.”

From touring as an active member of Breed 77 to touring as a roadie for Dragonforce and Cradle of Filth, Joyzi insists life on the road is basically similar as a member of the band or crew, with one main difference.

“I would say the main thing is when you have your own roadies you’re a rock star,” he laughed. “When you’re a roadie yourself you’re an assistant rockstar. The main difference is when you’re a roadie you work your ass off for longer hours and the glamorous part is pretty much gone – apart from the travel and seeing the world on your days off. I definitely prefer doing it as a drummer, that’s for sure (laughs). Its been a fantastic learning experience though. I love doing a bit of everything and I have to say as a roadie I love doing the big festivals. You have to be so precise with things and everything has to be perfect. I love that high pressure but tours were fun maybe the first 100 shows or so but now its more of the drumming and less of the roadie work. You work long hours but it can be a lot of fun as well. When it’s a big production as we have in Dragonforce when you get to the end of the show you think, I did that. I was part of that.”

Joyzi has had the honour of working with some of the biggest names in metal drumming, with Joey Jordison (Slipknot, Sinsaenum), Marthus (Cradle Of Filth), Adrian Erlandsson (At The Gates, The Haunted), Gee Anzalone (Dragonforce), Aquilus Priester (W.A.S.P) and Tim Yeung (Divine Heresy, Morbid Angel) among the many he has toured with. Despite admitting to missing being behind the kit himself, Joyzi also points out that working with such legends of the scene has had a positive flow-on effect with his own drumming.

“They’re all really different,” he smiled when pressed on which one was his favourite to work with. “I think I’ve been really lucky that none of them has been a dickhead (laughs). That is the favourite part of what I do because I get to see world-class drummers up close and most of the times I am right next to them and see what they do and it’s a constant learning experience. I’ve learnt from working with all of them, both in the sense of drumming as well as the little nerdy things that go with it. Because I have worked with Gee a lot I would say his set up is the hardest. It is the most advanced because the rack system we use for him is not conventional at all. Also, because its harder than everything else we are both more perfectionist about it so it’s more challenging and therefore more interesting. That’s probably one of my favourites to do. Aquilus Priester’s drumkit is something else as well (laughs). It’s like a space shuttle with two floors. That was a lot of work but cool to put together. All of the drummers are super easy to work with. Joey Jordison and Tim Yeung I was on long tours with, like six to eight weeks, and I can’t remember them ever complaining about anything. It was almost like everything was always perfect for them which made them very cool to work with.”

While the romance surrounding music sees many aspiring musicians dedicate their lives solely to one day playing on the big stage, the reality of life is that before that happens you must not only learn to play your chosen instrument, but you must also know the industry you are hoping to enter. Simply being a gun guitarist or a drummer with chops won’t deliver the subliminal skills required to have a sustained career at the top. There are many unseen hurdles along the way and Joyzi agrees the way to give yourself the best possible chance of success is generally far from a straight line that rewards talent with success.

“If you want to be a master of your instrument – of course, if you focus all of your time to it you probably will master it – but it really depends on your priorities,” he measured. “My priority was to succeed and become a professional. I didn’t want to do anything outside heavy metal music. There was nothing that interested me aside from working with animals or being a paleontologist but that was too much time in school and I hated school (laughs). So I thought, fuck what can I do with my life that doesn’t require school, so it was metal and that was it. I think trying to understand… the thing with heavy metal music and musicians is there’s a lot of passion and sometimes people cease to use logic as well. If you want to be a professional you have to use logic and you need to think about it. It’s a professional industry and there’s plenty of jobs in it – for instance, being a drum tech is a step closer to being a drummer in a bigger band – so I think you need to increase your odds of succeeding. My formula was do everything that I could. There’s nothing wrong with any job in music.”

Perhaps the biggest chapter of Joyzi’s musical journey is about to be written with the subdued announcement last week that he has just put the final touches to new music in the form of a new project that is set to revolutionise heavy music as we know it. While many in the music industry have heard whispers that Joyzi was about to unleash something big, very few knew anything other than change was in the air.

After seeing Joyzi’s recent Facebook post revealing not only obscure references and hints but actual information, it seemed as though the planets were aligning and the full reveal may finally be forthcoming.

“I can tell you the same thing that I said on my post yesterday,” he laughed, a little too mischievously for my liking. “We are the world’s first Post- Nu-Metal supergroup called The Violent InZident and something is coming out on October 1. That’s all I’m gonna tell you.”

Seizing on the term Post-Nu-Metal, I again pressed for more details, only to once again be rebuked with a laugh and knowing grin.

“We just think Nu Metal needs a new face and that’s us,” Joyzi smiled, before hanging up and leaving me, like many others the world over, determined to get some concrete answers.