LA Guns “Made in Milan” With a history that extends back across 35 years, various splinterings and reformations, a cast of dozens that includes members of half the most prominent LA rock bands of the past three decades, and a period of six years where there were two of bands using the same name, it’s probably fair to say that L.A. Guns have had one of the most chequered careers in heavy rock. In light of such a tumultuous history, it’s nothing short of amazing that two of band’s chief protagonists, guitarist Tracii Guns and vocalist Phil Lewis, would finally decide to rekindle their creative relationship a couple of years back and set L.A. Guns to right again. As evidenced by last year’s reunion album The Missing Peace, for the world’s hard rock fans that was about the best thing that could have happened.

That feeling is amplified by this scorching set recorded live at the Frontiers Rock Festival in 2017 – and I pity any band that had to follow L.A. Guns in the wake of this performance. There’s no build up. L.A. Guns just explode straight into heavy rock ass-kickery with ‘No Mercy’, taking on all comers and leaving them scattered on the floor from the instant release of energy. Make no mistake, L.A. Guns were absolutely on fire at this show. Lewis sounds amazing, his melodic rasp file voice holding up as strong as it’s ever been as co-conspirator Guns shreds the fretboard into match wood beside him. The rest of the band are not to be outdone – heavy, tight and rocking like fuck, L.A. Guns is a deadset rock and roll machine. Early classics rub shoulders with a handful of newer tracks like the showcase for Guns’ guitar-slinging ‘Don’t Look at Me That Way’ (which is, admittedly, now 16 years old) and the heads-down rocker ‘Speed’ from The Missing Peace; ‘Sex Action’ segues into ‘Paint it, Black’ as a brief homage to the band to whom every decent rock n roll act is in debt. Late in the piece ‘Jelly Jam’ offers a laid-back breather before they wrap the set the way they began it with the incendiary rocker ‘Rip and Tear’. It’s a sensational 14-song rockfest that seems to be over way too soon.

With this kind of chemistry, fans can only be left wondering what could have been for L.A. Guns if they’d only been able to keep it together 30 years ago. Suffice to say, with Guns and Lewis back together, we can only hope that they spend the rest of whatever time they have left rocking as hard as this.

Australia & New Zealand, finally get to experience The Missing Peace!… 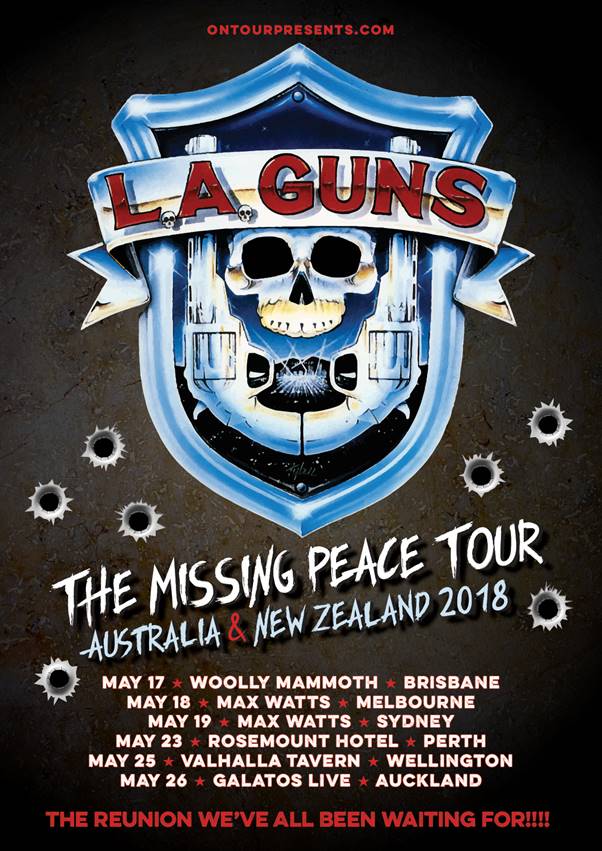