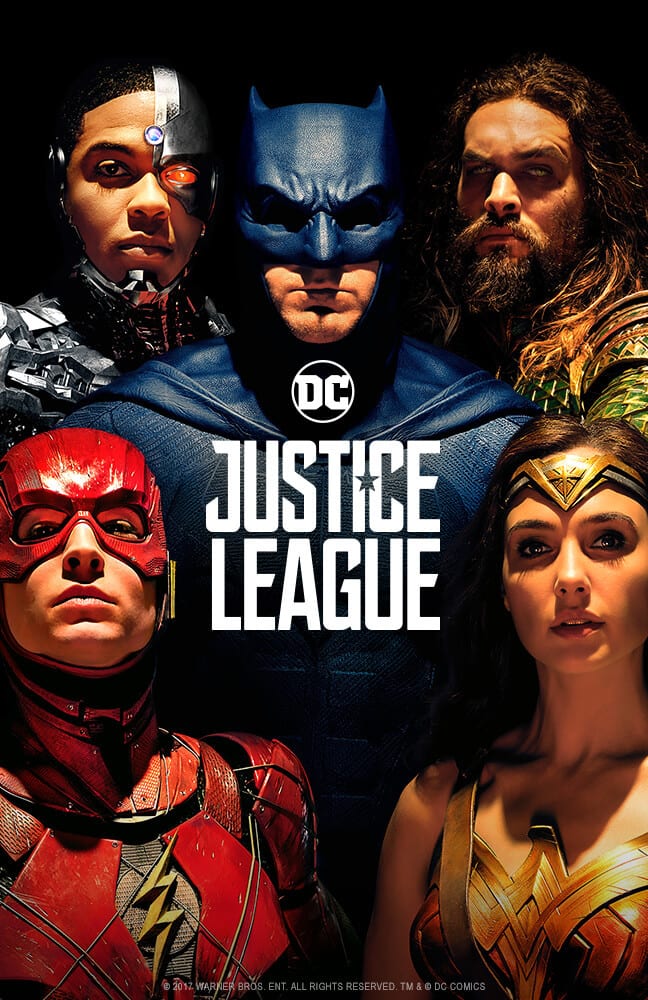 Well, Justice League is finally here. After a couple of decades of filmmakers wanting to explore the notion of DC’s core characters teaming up together it finally took the combined effort of Zack Snyder (300, Man Of Steel) and Joss Whedon (The Avengers, Serenity) to finally bring it together. Now for the big question though? Is it any good? Well, that all depends on what sort of filmmaking you like. If you like what David Ayer did with Suicide Squad then chances are you’ll like what Snyder does with Justice League, but if you want a film that goes back and explores the darkness of the DC universe like Christopher Nolan did with his Batman trilogy then look somewhere else. Sure at times, Justice League does explore some dark topics, with things such as re-animation, but it is really treated in a way that makes it feel like the animated Justice League series coming to life on the big screen.

Brought together by a team of writers, of which Whedon was part of, the Justice League storyline sees the fears that Bruce Wayne/Batman (Ben Affleck – Gone Girl, The Accountant) has had since the death of Superman (Henry Cavill – Immortals, The Man From U.N.C.L.E.). Alien activity on Earth has reached a worrying level and Bruce, Alfred (Jeremy Irons – Lion King, Die Hard With A Vengeance) and Diana/Wonder Woman (Gal Gadot – Furious 7, Keeping Up The Joneses) realise that they need to start putting together this team of meta-humans together very quickly.

Once the Amazons are attacked by Steppenwolf (voiced by Ciaran Hinds – Munich, There Will Be Blood), an ancient evil that is hellbent on destroying Earth they realise that the team needs to be assembled much more quickly. While The Flash (Ezra Miller – We Need To Talk About Kevin, The Perks Of Being A Wallflower) quickly signs up to the Justice League both Cyborg (Ray Fisher – Flashpoint, Batman v Superman: Dawn Of Justice) and Aquaman (Jason Momoa – Stargate: Atlantis, Game Of Thrones) are less convinced about signing up. Meanwhile, Steppenwolf begins to unleash hell on Earth and kidnapping humans in a bid to find all the ‘boxes’ that he needs.

When it comes to describing Justice League as a movie the only way to describe it is up and down. While the early back-story parts of looking at how The Flash, Cyborg and Aquaman came into being and being signed up by both Bruce and Diana seems clumsy at times, there are other elements of this movie that work perfectly. The battle sequences between the Justice League and Steppenwolf do work pretty well, and while at times the battle sequences do look the same of what we have seen in every other comic book movie over the last five years Snyder/Whedon do enough to put their own stamp on the battles. Things such as The Flash having to overcome his fears and go and save a family are the little touches that these movies need to separate themselves from each other.

Despite the heavy amount of characters in Justice League the screenplay does allow for characterisation and emotion to come through. Of course due to their newness we are given great insights into The Flash, Cyborg and Aquaman while Batman and Wonder Woman carry their traits from the previous films without too much ‘new’ characterisation brought into the film for them… there is plenty of time for that to show through in other movies in the future though. The scenes of Lois Lane (Amy Adams – Arrival, Nocturnal Animals) and Martha Kent (Diane Lane – Inside Out, Unfaithful) mourning the loss of Superman are touching and well done showing that the film does contain heart at times.

The biggest fault with Justice League is that somewhere along the line all suspense has been removed from the film. The re-animation sequences simply do not generate enough suspense and neither does the final battle sequence. It seems strange because in other areas the pace of the film works really well. Unlike with Thor: Ragnarok the film times it’s comedy to the right moments and never seems to go over the top. Witty lines from The Flash or Wonder Woman putting her lasso of truth on Aquaman fit into the storyline and in a way only add to the characterisation of the characters at hand.

That side of the script does hold back the actors a little as well. With so much action and not much else there are times when the actors here feel like action hero meat puppets. While Ezra Miller tries to steal scenes with witty one-liners which he often does most of the cast does get forgotten. Jeremy Irons and J.K. Simmons go missing for huge chunks of the film, which is pity due to the calibre of their acting. Likewise Amy Adams and Diane Lane are often MIA while Ben Affleck, Jason Momoa and Gal Gadot are reduced to roles that leave you thinking ‘wow they look their parts’ but feeling very little else.

To sum up Justice League does feel like the animated series has come to life. While a little bit of suspense and some more dramatic moments would have given the actors more to work with this was never going to be a film that would be even close to being on par to a film like The Dark Knight. In a sense Justice League is a ‘big dumb action film’ that will be enjoyed by hardcore DC fans but it certainly isn’t a shining beacon in the comic book genre.