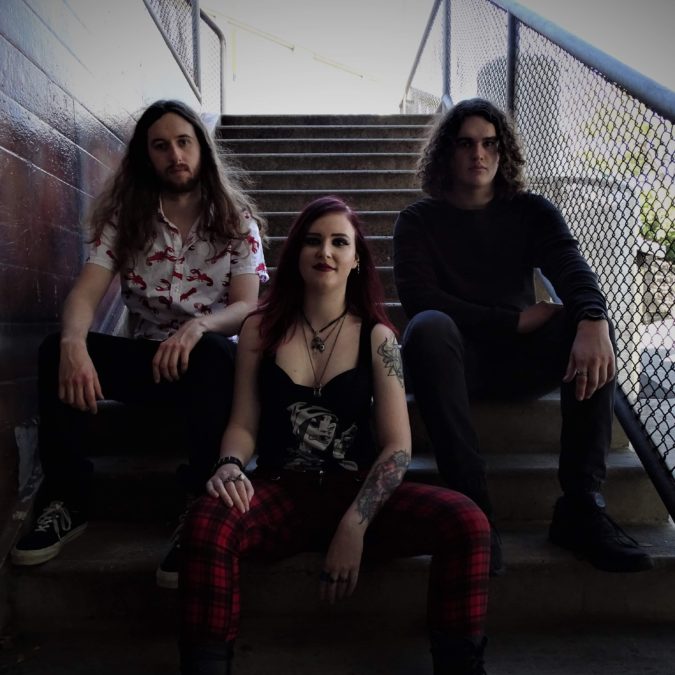 Coming from a place where many of us feel they have spent the last 12 months or so, Brisbane alternative metal outfit Krave have released their latest single “Purgatory”, which came out via HEAVY premiere last week.

“Purgatory” is a melting pot of driving, crushing riffs, irresistible grooves, and powerhouse Halestorm-esque vocals packed into a taut duration of just over 3 minutes. In this fiery and fearless track, the band proves that they are anything but lost in the bleak darkness of purgatory.

With a renewed vigour and lease on life, all three members of the band sat down for a chat with HEAVY during the week to discuss the new single and plenty more.

“We were going for a progressive sound,” vocalist/bassist Siana Davis. “Our influences for that one were CKY and Architects type of vibe. We wanted to write a riffy, aggressive, headbanging son and put dynamics into it. For the verses, there’s a soft, instrumental part that’s laid back and then the riffs are really strong in the chorus with sort of like a little bit of an anthem thing so that’s what we did instrumentally. Very rhythmical and progressive.”

“When I song write I take influences from quite a few different genres from Nirvana to Muse, CKY, all the way up to Bring Me The Horizon, Pantera and heavier stuff. I’ve got a whole range and love listening to bands so whatever I’m listening to at that moment in time that I’m songwriting will usually be the influence.”

“So the songs can sound quite different depending on how we go with it,” added guitarist Ryan White. “There’s quite a mixed bag of things going on there.”

In the full interview the band talks more about the single, what they were going for with the track musically, their upcoming EP, not being able to perform for over a year, how their sound has changed from their first single “Running” to now, line-up changes and more.