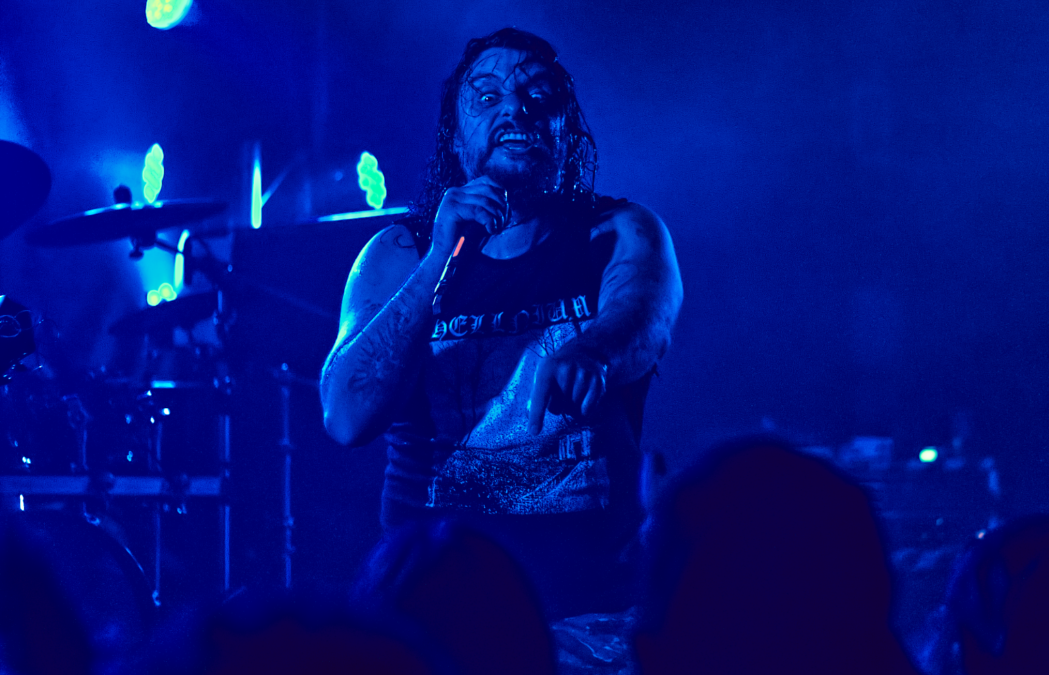 Thanks to the impending school holidays and the general cluster fuck of Southeast Queensland traffic, I rocked up fashionably late to Odius riffing the shit out of the place with their fresh twist on old-school thrash metal. Their performance was relentless and threatening, and their windmills of luscious locks gave illustration to the blistering fast-paced double kicks and speed metal riffs bashing my ear drums.

The dualling guitarists had the early crowd’s full attention with their whammy-driven solos full of divebombs and harmonic squeals. A circle pit erupted for the second last song until another shredding solo regained everyone’s attention. That was fucking Shredtacular!

High As Hell opened with an extended instrumental intro and then got stuck into some rocking grooves. Long drawn-out vocals pulled the riffs together and got the out of towners some serious local attention. Their second song was a chugging good time, and the band had a massive sound for a 3 piece as well as a highly active stage presence.

A quick bass solo kicked off the next song, which turned into some kind of instrumental doom number. It might have been an intro, or maybe an outro. Fucked if I know, but shit quickly rocked the fuck out again. Their sound reminds me of something that I just can’t put my finger on, it’s fucking good though, and that’s all that matters. I was fucking impressed and was left wanting more, which worked in their favour when I splashed some serious cash on a merch collection to help ‘em all get back home with a sufficient wine and weed budget.

For a band named Choof, I probably should have taken a big bong rip before they hit the stage. Unfortunately, there wasn’t one on offer. Luckily, though, because this what not at all what I expected. These guys sounded closer to tonight’s headliners King Parrot rather than the stoner rock adventure I was expecting. It was heavy and grinding, and some might even say brutal. Nothing makes a good grindcore act like a shirtless bass player, Slatts distant cousins maybe?

Every once in a while the mayhem breaks for a touch of heavy groove. Not for long though, because shit gets pretty serious, pretty damn quickly again. This is fucking intense, and I’m not sure where one song ends and the next begins.

Great warm up for the headline, but first we’ve gotta get Massic out of the way. Who the fuck am I kidding, more like get the fuck out of the way for Massic. Explosive from the get-go, Massic kick in with their heavy groove laden riffs.

Vocalist Si gracefully struts the stage, representing his brand-new Heavy Tee in all its glory. The cool kids up the back quickly make their way to front of stage and immerse themselves in the grinding chugs and intense vocal assault.

The band unleashes a little thrash number that breaks the broken grooves, and the moshpit quickly loses its shit. At this point in time, I’m not sure the crowd will survive long enough to endure the incoming onslaught from King Parrot. The band delivers their debut single Devolve and the crowd literally fucking destroys themselves! Fuck the circle pits, Si calls for some figure 8’s and the pit got real fucking messy!

It’s well past my bedtime now and King Parrot decide to hit the stage. As expected, shit gets real fucking intense, real fucking quick. The whole house is now in the pit and chaos ensues. A vacant space onstage leaves me asking the question, where the fuck is Slatts? Fuck knows? Apparently, he’s sick. What a sick cunt!

Youngy screams Disgrace Yourself, as if the crowd needed any further encouragement. If this shit carries on, someone is sure to get hurt, or at least get their feelings hurt. Luckily, there are no signs here warning against crowd surfing, not that there is any security to be seen. Pretty sure they all fucked off to somewhere safe. Maybe to the drag show at The Beat just up the street.

In between songs the band get the crowd to send Slatts a get-well message and the camera turns for Toddy to blow him some kisses. I head side stage to get a look from the band’s perspective, but all I get is a fresh flash of Youngy’s bare ass. Thanks mate, love you too! Squiz cases side of stage for a moment looking for another VB. Where’s all the fucking VB at, this is a King Parrot gig, right?

Chris from High As Hell goes on the hunt and quickly sorts shit out for him. I guess I should mention Ari on the other side of the stage with that majestic fucking Drullet. That’s a dred mullet, in case you hadn’t already figured that out. Although, they might not be dreds, he just may not have brushed his hair all tour.

So far everyone has survived, as far as I know anyway … but wait, were those some tits I just saw onstage, half a tit maybe, just some under boob? And I’m not talking about Slatts tits, he’s not even here, and neither are the tits, they just surfed straight out over the crowd.

Youngy announces the bands departure, but not before we get some Shit On The Liver, again! No one asked for an encore, well they kinda did, so we got one and then that was fucking that, but not before the band and the crowd came together for a quick Slatts chant!

Get well, Wayne, get well!

EXCUSE THE LACK OF PHOTOS OF MASSIC BUT IT’S KINDA DIFFICULT WHEN THE PHOTOGRAPHER IS ALSO IN THE BAND!!!