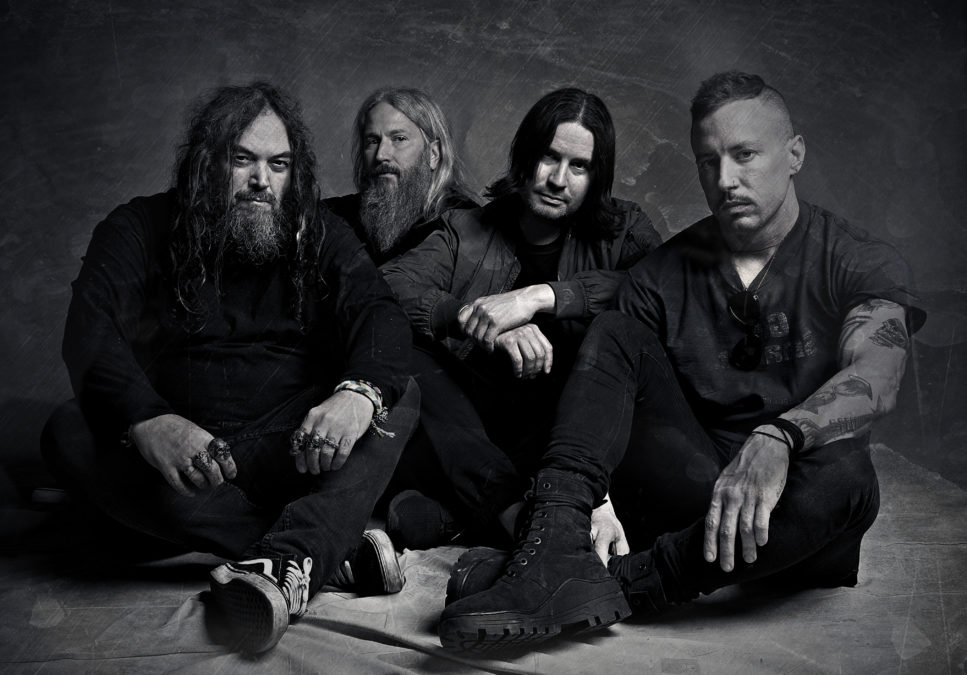 Killer Be Killed took the music world by storm with their 2014 self-titled debut.

Featuring the cream of metal in Max Cavalera, Greg Puciato, Troy Sanders and Dave Elitch, the band was an instant success, unfortunately touring minimally because of the commitments each member had to their respective bands.

Whispers of hope have been circulating almost weekly since, with each perceived hint at new music generally failing to come to fruition.

Then, as if out of nowhere, Killer Be Killed dropped the single “Deconstructing Self-Destruction” last month and the juggernaut that had slowly ground to a halt suddenly gained momentum with the announcement not long after that the band would be releasing their much anticipated second album Reluctant Hero on November 20.

“It’s something that we’ve been working on scattered over bits and pieces of time for the last five years,” bass player/vocalist Sanders told HEAVY, “which really started… our one and only album came out in 2014 and in 2015 we did our first and only tour on the Soundwave shows across Australia and when we left we all said to one another we will continue, we’re gonna do another record, and we will continue to tour. It’s not a matter of IF, just a matter of WHEN, so it’s taken six years since our first album but we all share the same dedication and perseverance to make it happen and now we’re lucky enough to be here talking about it. I’m very, very proud of my bandmates.”

While often separated by large distances due to vastly different schedules, Killer Be Killed slowly assembled fresh material for another album, preferring to allow new music to grow at its own volition rather than force anything out.

“We always wrote everything together in the same room as one another in these bits and pieces over the last five years,” he said, “so that had to remain intact because that’s the best kind of energy and collaboration that we could share. We just wanted to make sure that we were having fun and every one of us enjoyed the riffs, all the song structures, all the vocal patterns, all the song titles – just everything. We wanted to be super proud of it, that was the whole point of putting this band together in the first place is that we wanted to have the same feeling as when we formed out very first band as teenagers. We wanted to jam with friends that we enjoyed being with, writing music that makes us feel good, keeping the simplicity very much intact. It maintained that the whole time and I’m glad that all four of us are still interested in doing this band because I’ve said before that none of us really NEED this band but all of us really, really WANT this band so that’s kind of special right there in itself.”

Despite continued questioning of each band member that seemingly intensified with each passing year, Killer Be Killed elected not to disclose or give updated statements on the new album, not wanting to raise their fans hopes and/or expectations.

“That was actually a decision that I brought to the guys several years ago,” he nodded. “I knew this was gonna take us a long time to piece together because we are so busy with our other bands that we’re in. Although I am not on social media I know that everyone else is so I said what do you guys think of the idea of not saying that we’re working on stuff because I feared that the handful of people that really cared about it and would get excited were the people that were excited when we got together years ago and wrote these songs and that sometimes it would take over a year to write more stuff and over time people would say are you still doing that? Is it still happening? And it would be drawn out and I felt it wasn’t important to get anyone excited about small bits of productivity that we were doing so I said why don’t we not mention it to anybody until we have a full album. The whole point was to do it in one deal and come out with the announcement and say here it is to have that impact and those guys agreed with me and we kept it secret – not that it was a huge deal – but we just didn’t want people that cared about it to get the feeling that they don’t belong.”

In the full interview, Sanders talks more about the album, details the title track “Reluctant Hero”, discusses their Australian tour and how it gave the band hope for the future, working alongside some of the best musicians in metal, discusses each member and what they bring to the band and more.

PrevPrevious.Exclusive: EVOCATUS With Next Single
Next.MOLLY & THE KRELLS Get Straight To The PointNext