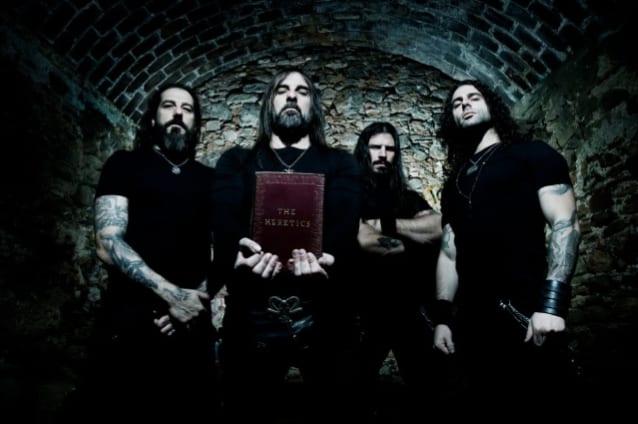 Non Serviam, a philosophy that they have sworn by their entire lives. “We do not conform. We follow ourselves and our vision. The spirit is what matters, and I feel that that’s what’s missing these days. You have to fight with your demons. And that’s how we keep the spirit alive.” HEAVY Mag was honoured to have a chat with none other than the incredible Sakis Tolis, frontman and guitarist of Greek extreme metal lords Rotting Christ, a band that paved the way for underground extreme music.

31 years after the founding of the band, Sakis Tolis is still going strong, proving in every way, the true Greek metal warrior that he is. “After all these years, what’s important to us is that we stay true to ourselves. We don’t compromise on that and we never have.” Rotting Christ has just released their 13h full-length album “The Heretics”, a record that grips you in many ways, continuing on from where “Rituals” left off. On asking about the numerous Biblical references, he said “I live in a Christian Society, and that’s what this album is about; the Heretics from different times who were against religion. It includes a lot of sayings and quotes from people who were heretics.”

With a name like Rotting Christ, it makes one wonder…..“If you want to be against religion, you must learn about religion, religious philosophy has some positive things, I’m against organised religion, if you look at Hinduism, you can see a lot of positive things and it’s against my beliefs. I just take the good things from each religion and use it for my life, not follow blindly things that someone says, it’s not me, and this is how I go about everything in my life.” In a way, this album does seem like an ode the very existence of Rotting Christ itself. Rotting Christ is more than just a band; they’re a symbol of defiance, passion, power and much to the surprise of many, spirituality. One of the first things that became apparent to me when I listened to one of their older releases “Thy Mighty Contract” was just how much depth there was to their music, and what it is they are trying to say through it.

After three decades, the band continues to leave their mark wherever they go and I couldn’t help think about what Sakis felt when reflecting on their journey through the years as Rotting Christ. “ I don’t look back very easily. When I wrote the book, I was forced to do that, I just look forward, lot of things I have seen and done, lot of experiences, learnt from my mistakes and now I’ve reached a point when I don’t want to stop.”

For the full interview and to listen to HEAVY’s insightful chat with Rotting Christ frontman Sakis Tolis, click on the link below.