KAOSIS performing as part of Dead of Winter Festival at the Jubilee Hotel, Brisbane on 13/07/19 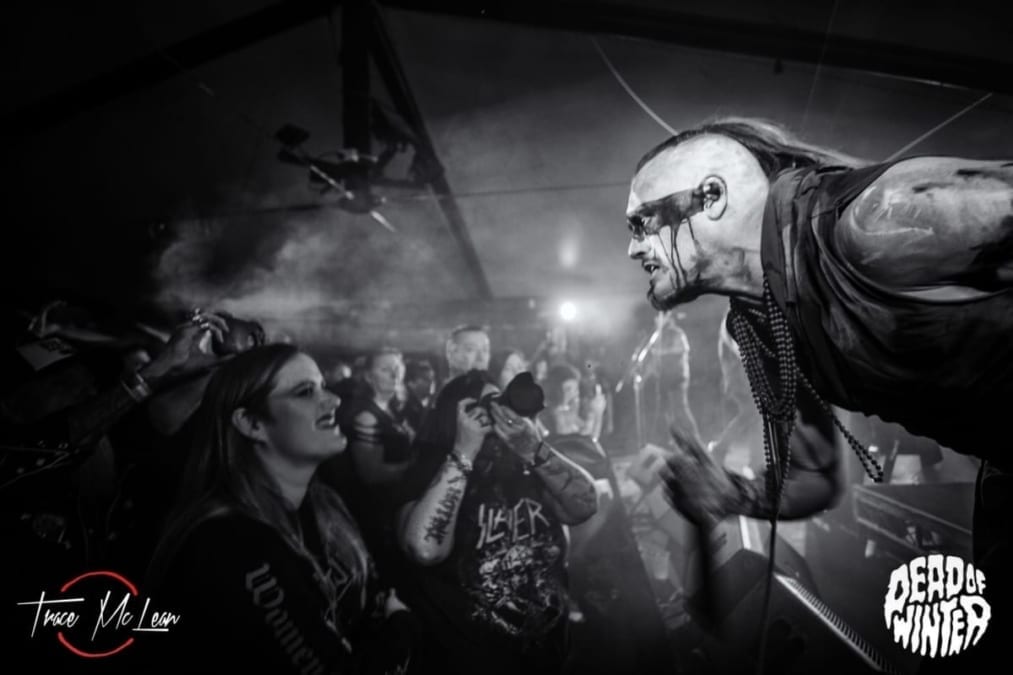 Seldom do touring bands generate as much excitement and anticipation as Kaosis did on their debut performance in Brisbane at last weekends Dead of Winter festival in Brisbane.

After a short tour down South the newcomers from New Zealand chose Dead of Winter to complete their Australian mission and from the first note set about flaying the crowd with a unique blending of metal, dubstep and industrial music that is as much a visual spectacle as an aural education.

Walking on stage amid intro music and swirling smoke, the large stage was fully utilised as the eight-piece juggernaut silently found their piece of turf and marked their territory with precision and dominance.
Adorned with war paint as if literally going into battle, Kaosis launched into single ‘Dubstep Punk’ with an enthusiastic and ferocious start to proceedings that swept over the assembled crowd, almost daring you to stand still as they set about converting the uninitiated.

It is fair to say from the pre-set rumblings of certain sections of the crowd that Kaosis were the novelty act of this year’s festival, with few people having seen or heard more than what had been posted on social media about the current tour.

Vocalist X3N wasted little time dismantling that notion, hurling himself into the crowd for the first song and marching across the stage like a demonic monk determined to trap you into submission.

With two hype girls – Monshi (samples), and Om3n (turntables) – flanking each side of the drumkit the action soon went into overdrive with second song ‘Bullethole’ featuring heavy artillery style guns wielded by the girls aimed at members of the audience who were confident enough to meet their gaze.

Both girls are pivotal to the sound and feel of the band, at times sporting green lazers from their wrist which danced over the crowd while at other times wielding masks and costumes that enhanced the song they were attached to. They regularly attacked the crowd with their vocal delivery and timed their run in the spotlight to perfection without ever threatening to overdo it.

Guitarists VhiiSiioN and VIVIVI were given a licence to roam, each of them commanding different sections of the stage as they set about their task. At one point VhiiSiioN stunned the crowd by hanging upside down from one of the staging wires while still playing, adding yet another visual outlet in a set full of highlights.

With six-part harmonies and at times crushing vocals, Kaosis soon won over even the staunchest metalhead who seemed at first reluctant to embrace the dubstep laced music unfolding before them. Each member had a role to play in the performance while still maintaining their individuality and the expanse of the stage at times made it difficult to keep up with everything that that was going on.

During fourth song ‘Throw Em Up’, every person to a man did as they were instructed, with ‘Zombie’ and ‘Who’s Your Daddy’ met with sing-along sections by pockets of the crowd, many of whom would not have heard the songs before.

By set closer ‘End of Fear’ the hype girls were smeared in (hopefully fake) blood and each member had played themselves to the point of exhaustion. People in Slayer shirts were cheering and clapping and those who had turned up their nose during the intro were still dancing, such is the effect of Kaosis’ live show.
As sporadic lights and eerie screams filled the air the band walked off single file, parting the audience as they left, and with X3N promising this is just the beginning of their worldwide assault one can only wonder how close to fulfilling that mission Kaosis will go.

My money is on a successful mission.