JOYCE MANOR ‘A Million Dollars To Kill Me’ 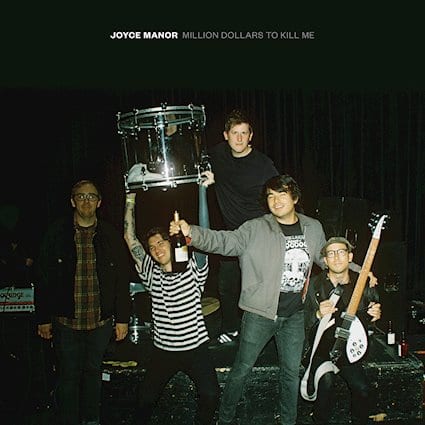 The follow up to the 2016 release “Cody” this latest offering originally started out as a group of songs for lead singer/guitarists Barry Johnson’s potential solo album. Now a Joyce Manor album A Million Dollars To Kill Me is what we have come to expect from the four piece, that being a collection of emo rock ditties.

A somewhat surprising detail to this album is who produced it, Kurt Ballou of Boston Hardcore godfathers Converge. Famous for their brand of pure hardcore intensity Converges Kurt Ballou set the dial to chill mode for this album and did a good job of it.

Opening track “Fighting Kangaroo” sets an instant sing along with a catchy scat backing vocal and gang vocal chorus. Continuing the almost upbeat rock style “Think I’m Still In Love With You” cases along in a similar vein as the opener, equipped with a chorus line (the song title) that won’t leave your head straight away, a short and sweet track.

The next track “Big Lie” sees a more in-depth Joyce Manor, with a Chase Knobbe lead guitar section after the lyric “We can work it out it’s all a great big lie” kicking in will keep the listen wanting more of it, setting the emotion as the song builds and Johnson becomes more intense via the microphone.  Stand out track.

“I’m Not The One” draws back to a poetic stripped back number followed by the title track “Million Dollars To Kill Me” kicking into a strong rhythm section by Matt Ebert and new drummer Pat Ware the lyrics “She’s the only one that could take you to a pawn shop and sell ya for twice than what your worth” makes it clear that there is a finger pointed at someone on this one. Giving the song personal feel.

“Silly Games” similar to “I’m Not The One” sees a more stripped back track with a piano section that sets a darker mood for its entirety it too is followed by a more upbeat “Friends We Met Online”, this being a track I could only listen to very rarely. Just not the strongest melody and is quite repetitive and not in a good way unfortunately.

Rounding out the album “Up The Punx”, “Gone Tomorrow” and “Wildflowers” see the continuum for the album reaching to almost punk rock levels and back down to stripped back emotion to end the album. “Wildflower” has a purposeful sudden ending. The ride is over in just over 20 minutes.

If you like your music with plenty of heart but want to kick back, chill and listen then A Million Dollars To Kill Me will nourishes the listener greatly.

PrevPrevious.ANTI-FLAG ‘American Reckoning’
Next.INTERVALS at The Bald Faced Stag, Sydney on 23/09/2018Next