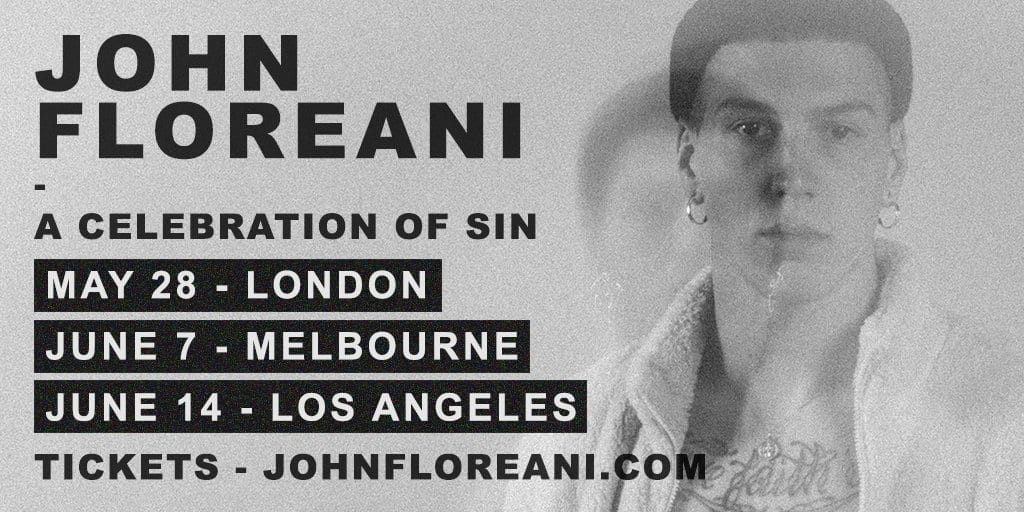 We find comfort in the space of others who we feel not only understand us but give us the opportunity to be heard and respected. A place where we feel just as at ease and content, like the space we call our home. Through the emotion, the love, the humour and even the awkward silences we felt this peace in the presence of John Floreani (vocalist Trophy Eyes).

It’s venues like The Workers Club that make me so proud to call Melbourne home. Close enough to be part of the city life but far enough away to make you feel the real urban, cultured and independent vibe that Fitzroy displays so well. A place where you can feel comfortable in the space that it offers, while still connecting with the many people it accommodates.

As I made my way in from the cold, I knew just what I was in for when Ruby Gill took to the stage. Here was a girl I have utterly adored and admired since I first heard of her at the beginning of the year, for the very reason’s that she was about to display.

In spite of her powerful vocals and heartbreaking lyrics, this ability to silence the entire room within just her first few notes showed just how well her emotions hit on all of our own. Now maybe I can only speak for myself when I say it was like drifting off to another world as she put her heart and soul out onto that stage, but I’m sure I wasn’t the only one.

With shaky hands, quirky comments and an anxiety that could be felt through the entire room, her whole persona on stage is what made her performance all the more unique and mesmerising to all of us that stood before her. This is the type of art that you need to feel and experience for yourself, these words don’t do it justice.

The simplicity and beauty of this line up in only having two acts gives us the appreciation of individual artists striving to not only make a living in what they do, but to deliver a performance that will have an impact on us for many years to come.

And John Floreani had the ability to do just that, as he made his way onto the stage.

“I’m just lonely, I’m not scared…”, felt the room go silent, as the song “Pathetic” set the wheels in motion. However, it didn’t take more than a glance to realize that John was far beyond sinking into a low that he may have felt in the past when writing such a song. With the biggest grin on his face, I saw a man that was finding happiness in places that once brought him so much pain.

In a fashion that so many artists lack these days, he went on to tell the story of almost every song he played, sometimes spending more time on that than even playing them. But no one in the room had a problem with it because it felt like he was connecting with each one of us on a personal level, going deeper than I think any of us expected.

Having released SIN this morning, John began to explain the meaning behind the single “Oh Brother” in a way that hit every single person in that room by surprize. He wasn’t afraid to tell us everything as he tried not to cry while expressing the emotional pain and rejection he went through with his brother after all they’d been through growing up, essentially resulting in the last line of the chorus and the last thing he ever said to him, “I don’t love you anymore.”

Although his words were getting deeper, he never failed to maintain a level head as he apologized for making us cry and lead back into his comfortable side with which came back the comedian in him that couldn’t help but tell jokes for 50% of the set and even when he wasn’t joking, would giggle to himself as we revelled in his pure joy and gleefulness. It was like watching a little kid with his best mates, he was really having the time of his life.

The crowds participation throughout this entire set was nothing short of magic. With a glimmer in his eyes, he began playing “Cleveland, OH” and told the story of how he found the girl of his dreams. A story of love at first sight, one which lead to a commitment that would see him travelling to the other side of the world on a regular basis. Despite being near broke, he explains how nothing was going to stop him from being with her, as he turns his head and smiles, looking into the eyes of this girl who left everything to be here with him.

I have never wanted to delve more into a mind than I have with that of John Floreani and tonight gave me probably the closest connection with him that I have ever had before, as I’m sure it did with every other person in the room. Through a lifetime of experiences and cataclysms that very few could say they understand, John showed us another glimpse into the world inside his head and just how bitter sweet life really is and how hard it can bring you down, then all the way back up again.

Here was man who, despite all mental issues and past desires to end it all, walked out onto that stage to share his life story with the few of us who have been here almost every step of the way. Musically, lyrically or otherwise we understood him, we shared his pain and we were thankful for being here on this cold Friday night in Fitzroy.