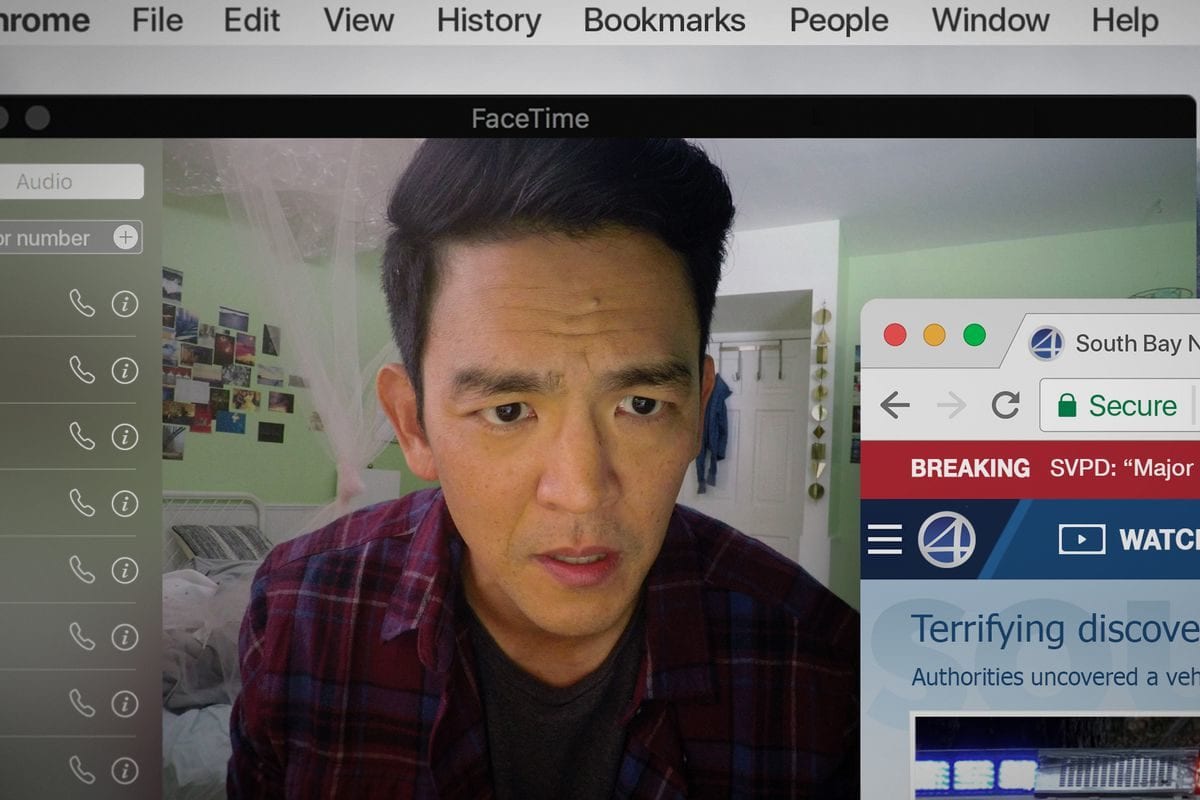 The world of filmmaking is about to get another major shake-up. When Paranormal Activity hit our screens suddenly the world realised that audiences would go and see films shot on static cameras. Then came Tangerine, a feature film shot entirely on a phone, Now comes the next big step with the thriller Searching a film that uses various forms of technology to capture the intriguing story at heart.

So far the film has been receiving praise for its thriller aspect and first time feature director Aneesh Chaganty is being credited as the man who has potentially changed filmmaking forever. His leading man John Cho certainly agrees.

“You know I texted Aneesh after I saw the film the first time and said ‘you know you have had made a contribution to the vocabulary of cinema’,” says Cho who plays the concerned father, David Kim, in Searching. “That is very difficult to do because all the tricks are out of the bag at this point. But this is a really ingenious attempt to mirror what is happening in real life right now, which is more and more of us communicating through our devices, so how as a story-teller do you depict that? Aneesh went inside the computers and inside the tablets and yet it feels like a movie. It feels like a thriller so cudos… I was just glad that I was there.”

“I think the movie is pushing on a lot of fronts,” he says going on looking at why Searching is new and bold. “It is saying something about the time that we live in and it is making a contribution to what I think is a really classic genre. And I can’t look past the visual of the family that it depicts. They are Korean-American, they are specifically Korean-American but it doesn’t have any bearing on the plot or story. So on a lot of different fronts it is doing something new and bold and for people to respond to it, it is very gratifying.”

Cho who most film lovers will remember as the fun-loving Harold Lee in the Harold & Kumar franchise and as the man who coined the phrase MILF in American Pie says Searching is going to take fans on a thrill ride. “The last time I checked we are all members of a family, and while we may not all be parents we are certainly all children and there is something elemental about that bond. It is very easy to relate to that, being a Dad, but past that this is a movie but I like to call it a page turner. This is all about how this is going to turn out and there are so many twists and turns in it that we just wanted to keep that emotion all the way through it and keep everybody guessing… so I hope it worked.”

A star of the recent Star Trek franchise of films Cho knows what audiences want when it comes to films and he said that fans of the thriller genre are going to warm to Searching very quickly. “Listen this is a good rock ‘em and sock ‘em time,” he says smiling. “It is going to be a fun night out with a compelling story and we hope that it keeps you guessing. What I love about the device thing though is that we have all these big feelings that we put into our little devices and our movie takes that and goes “oh no what you are feeling is big, look at it on the big screen.’ Then of course with the thriller genre I think it is something that works best with a crowd and to be in these screenings and to hear the gasps and the hoots and the hollers and the ‘oh my Gods’ I think that is how you want to see movies.”

Like it seems most of the critics in America at the moment Cho is also full of praise for the director, Aneesh Chaganty. “I think he brings such ingenuity  and energy and an intelligence I don’t know who else could have pulled it off and I sense that. And to be honest I didn’t want to do the project until I sat down with him, because I thought there was a problem with this little puzzle and I wasn’t sure if I wanted to get involved with it but he is so ingenious and so charismatic that I said yes and I am glad that I did because I saw him work through this Rubix cube and it was a doozy. The work that he put into it after we finished, he spent two years editing, and I say editing they had to create all these worlds after we finished shooting… it is staggering amount of work.”