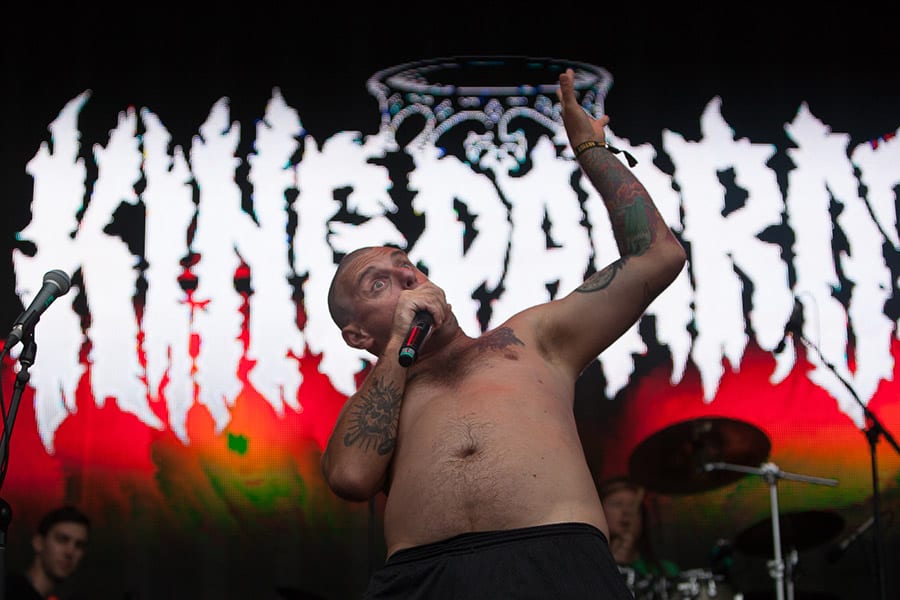 “Some of them [songs] are the ugliest and nastiest stuff that we could come up with, but it’s also a bit of a commentary as well on what’s going on in the world today.“ 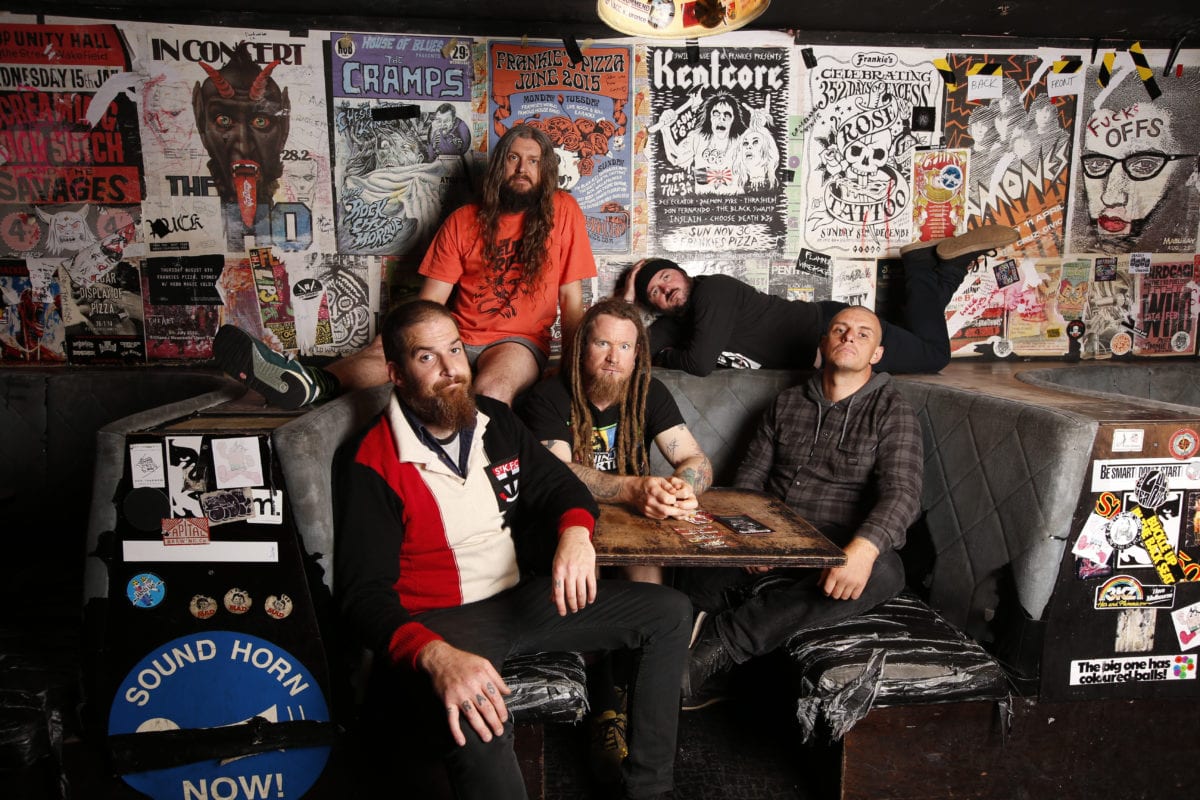 “It’s been awesome, man!” enthused Matt Young, vocalist for King Parrot, on their recent sabbatical. “We’ve had a nice little break, just taking it easy. There’s not much happening visually with King Parrot apart from the album coming out on September 22, but there’s a lot going on behind the scenes and lots of work happening for the upcoming… I guess it’s a world tour now (laughs).”

After initiating their quest for world domination with relentless touring over the last couple of years, the boys took a break for the early part of this year but are back now with Ugly Produce, an album which looks set to solidify and expand on their aspirations and hopefully propel them into the heavyweights of the metal scene.

“It’s gonna be nice just to let it go and set it free,” Youngy admitted. “We’ve put a lot of work into it – not only with the writing and production and recording process itself but also the other stuff that goes on that no-one else hears about. It’s just nice to let it go and see what people think of it. We feel like it’s our strongest release to date. We’ve had the same line up together now for three or four years, and it seems like we’re in a pretty good space. It was nice this time around to have a bit of a break and step away from the band for a little bit. We did our last tour in February, and then got really stuck into the recording part of it, and since then, we’ve all been able to go back and sit and chill out because we know that we’ve got a pretty heavy touring schedule coming up for the rest of the year. We just wanna be able to… I guess regroup and recharge the batteries and build that hunger up. That was the idea behind having a bit of a break. We probably could have kept touring if we wanted to, but it was more a case of firing us up again to get back out there really hungry, and I think it’s working for us.”

With two previous albums, Bite Your Head Off and Dead Set under their belt Youngy says that King Parrot have been steadily refining their sound and is confident that the material on Ugly Produce is going to reflect the musical growth within the band.

“We just wanted to… I guess, we wanted to come together more as a band and let the chemistry within the band speak for itself a little bit,” he measured. “We realise we’re not everyone’s cup of tea, but at the same time, we’ve got a dedicated and passionate fan base of people that like what we do and appreciate what we do, and they’ve been super supportive of us over the years. We wanted to really pay them back with something that was a real step up.”

With song titles like “Piss Wreck”, “All Hail the Grub”, “Die Before You Die”, and the single “Ten Pounds of Shit in a Five Pound Bag”, it is clear that King Parrot have lost none of the humour that permeated through their first two albums, with the moments of levity punctuated by an anger and hostility that suggests Youngy is trying to cleanse his soul.

“Pretty much anything that pissed me off got on there,” he laughed. “I guess it goes with the territory with a band like King Parrot. Of course, there’s gonna be a lot of anger, and I guess the foundation of the band was built on angst. We’re pissed off, and we’re gonna show you! In this day and age, and the world we live in, there’s a lot to be pissed off about. There’s a lot of personal stuff on there for me and personal situations and relationships that come through, but there are also observations as well and things that I’ve learned from an outsiders perspective on what I write about. I dunno, man… there’s a lot of spite on the record, and some of that probably comes from me being a previous drug and alcohol user and not doing that anymore. There’s a lot of… being in recovery and being in the music industry is probably not the best place, so I guess for me, with that comes a lot of frustration because having that in your face all the time is really challenging. I just try to deal with it the best I can and sometimes that means walking away, sometimes that means writing a song about it.”

Ugly Produce doesn’t leave much to the imagination, and Youngy lets out a roar when I ask him if it refers to the band members or the music contained therein.

“I think it refers to both!” he laughed. “It’s got a few different meanings, I guess, but definitely the band members (laughs). You could relate it to the songs, too. Some of them are the ugliest and nastiest stuff that we could come up with, but it’s also a bit of a commentary as well on what’s going on in the world today. It’s pretty ugly out there, and it’s pretty nasty, and this is our response to it. Our guitarist, Squiz came up with the title referring to the out-of-date fruit and veg’s that they put out for sale on the supermarket shelves, and we were like, ‘that suits us’ (laughs). It suits the album and suits the music. This is it. This is the rotten stuff that we’ve been harvesting, and this is what we’re gonna put out.”

King Parrot is currently riding a self-propelled wave of success through the local, national, and international music markets, but it wasn’t always that way. In the early days, Youngy admits to some teething problems within the band and their music, especially with himself, his demons, and, surprisingly, his confidence.

“Back when we first started, I was still using and drinking a lot,” he recalled. “I was a mess. I remember the original jam sessions that we were first doing, and it was messy and sloppy, but something really clicked in there in the beginning. We certainly had to go through some initial ironing out stages with different members and whatnot, but I think what we had… I don’t know what it was, but there was something there that just clicked; some chemistry within the band and that really translated well in the live setting. Initially, we were a bit timid, and I think stepping out of my skin as a frontman and just letting myself go a little bit more – and that all came with confidence – really helped draw that energy that King Parrot has now as a live band. That took me quite some time to become comfortable with and being comfortable on stage and standing up there on stage.

“Previous to King Parrot, I hadn’t been the frontman – I was a bass player and played in many bands around Melbourne for probably ten years or more before we even started King Parrot. So it was weird for me to get up and stand on stage with no guitar and just be there with a microphone. That was really confronting, and as we started to play more and more shows and get the ball rolling and the confidence grew… there was a lot of discussion between me and our guitarist Ari, as well. We do a lot of the driving behind the band in terms of creativity and the way that the band pushes itself, and we really wanted to shake the foundations of the Melbourne scene, and that pushed us towards the national and international scene. In the initial stages, it was more about us being pissed off with local audiences not really responding to local bands the way that they would international bands. That’s when I really started getting in the audiences face and grabbing audience members and making them pay attention and making them understand that we weren’t gonna be one of those bands where you could just stand there and tap your foot or stand there with your arms folded and be some sort of metal snob or critic. That wasn’t gonna happen at our shows. If you were gonna stand there like that, then you’re gonna get pushed or shoved or thrown around because when we’re coming to play, you’re gonna pay attention and you’re gonna get involved. It took a little bit for that to happen and shit things probably happened because of it (laughs). But I think the results speak for themselves now, and when King Parrot come to play a show, people are there, and they’re ready, and they’re up to the front, and they’re ready for the mosh pit to start and shit to go down. That was something that we really brought to the table from the beginning, and I think it’s paid back a lot over the years and we’re really grateful that people feel that way now. We want our shows and our music to be an outlet for people as much as it is for us.”

King Parrot on tour in Australia this December