Lauren Hart of Once Human on returning to Australia 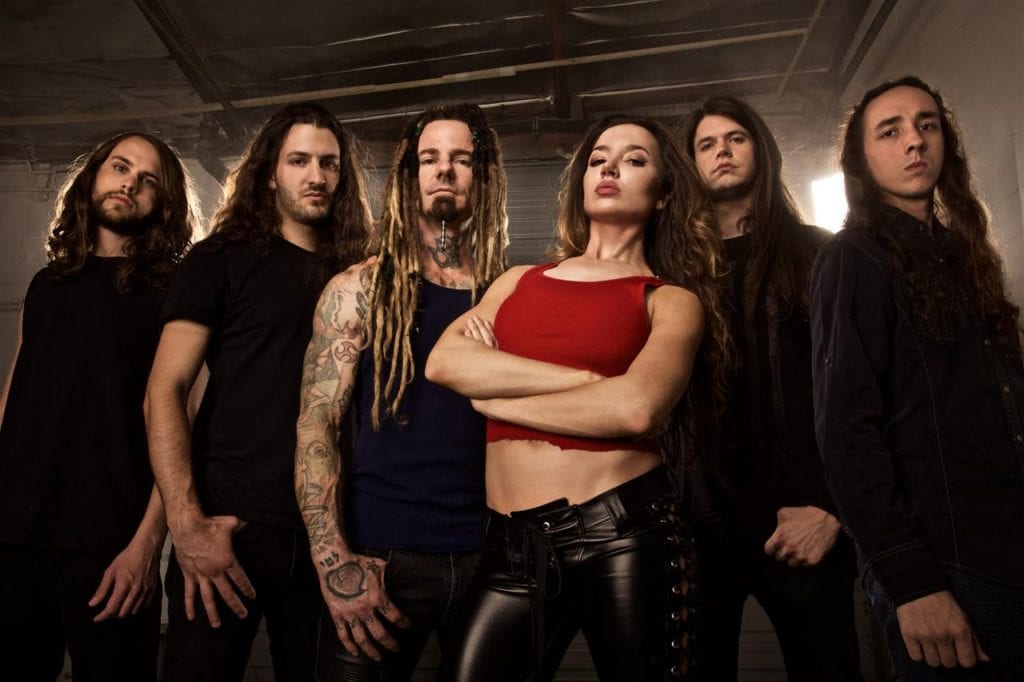 “About a fifteen!” exclaimed Lauren Hart, vocalist for Once Human when pressed on how excited she is on a scale of one to ten to be returning to Australia for the first time with her band early next year. “I’m super excited. Obviously, it’s a dream come true for me, especially because it’s such an extensive tour. I want some of the guys like  Dillon (Trollope, drums) and Damien (Rainaud, bass) who have never been to Australia before to see the country and there’s no better way than touring to do it!”

The tour gains extra significance with it being Hart’s triumphant return to her adopted country after leaving three short years ago to test her mettle on the international scene.

“Definitely,” she gushed. “It’s been my dream since I was a kid to be able to play in a band there and for people, so it is going to be amazing. I’ve never played any large shows in Australia, so it is hitting home and close to the heart. I was born in America before moving to Australia, so I always had the opportunity to come back and move over to the States whenever I wanted so in 2014 I flew back from Australia and decided to get a little studio in L.A and see what all the fuss was about (laughs). If things can happen here, let’s try it out so I got a studio and a $99 guitar and a little crappy amp because I really didn’t have much money at the time, and I just started making these videos and put them on YouTube and Facebook and I really didn’t think they were that good (laughs). I didn’t think the guitar playing was great but for some reason – I think it was because I was playing black metal with speed picking riffs and I was a girl (laughs) – it caught the attention of some people and ended up in the hands of Monte Conner who is the Nuclear Blast A & R, and he sent it to Logan. Logan is somebody Monte would send stuff to and say maybe you can build something around this person and maybe it will work and maybe it won’t so that’s what I was (laughs). I went to Logan’s studio – not knowing who he was, because I’m an idiot (laughs) – and started writing with him and he was stoked. He was always getting people who wanted to do radio music, and I didn’t want any part of that. I wanted to do heavy metal, so that spoke to him and maybe opened a part of him he hadn’t been able to express in a while.”

The Logan that Hart speaks of is Logan Mader, he of Machine Head and Soulfly fame, who had all but resigned from playing the guitar to concentrate on producing and other aspects of the music industry. Despite not having played or recorded his material for more than a decade, Mader connected with the vibrancy of Hart and pretty soon Once Human was born, with Hart’s vocal prowess an important factor in Mader’s return from self-imposed exile.

“I’ve always preferred to scream,” she laughed. “I would scream in garage bands when I was a kid, and it just felt good. It’s always felt therapeutic. I have been playing the guitar for quite a while as well but it didn’t come as easy to me, and I felt like the only time I could play was when I was alone, and as soon as I had to play for someone I would get really nervous, and my hands would shake, and I thought that’s not gonna work (laughs). If you want to be in a band, you have to be able to play in front of people so I was always by myself in my room with my eight-track recorder and my little microphone that I would scream into in the bathroom because it had really good reverb (laughs). I always wanted to be a screamer though; that’s where my heart was. There was something about it that made me feel really good.”

With Hart on board, Mader set about putting the rest of Once Human together, but rather than look for seasoned big-name players he elected to make things a little less profile in an attempt to have the band recognised more for their music and ability rather than their members.

“He didn’t exclude anybody because they were already established,” Hart pointed out, “but I think the way he has done it is really good. I think people these days go off names and disregard people who don’t have that name already but may have all the talent in there but not a social media following or that sort of thing, so they don’t get much of a chance. I think Logan was a bit old-fashioned in that way and he wanted to have someone there more for their talent.”

After releasing their debut album in 2015, Once Human followed it up sixteen months later with Evolution, an album that has not only shown that in their approach to music, but has also solidified their growing reputation in the metal community.

“It was received a lot better than the first one!” laughed Hart. “On the first one we were more feeling things out, and lyrically I didn’t write for myself on it. I wrote more what I thought people wanted to hear and that’s where we went wrong. I wrote for everyone else, like, they’ll think that’s cool, and that was just inexperience on my part because on this album the music is a lot more… intellectual in a way. I thought my lyrics weren’t gonna be good enough – like I wasn’t good enough to write for the album – and then I just ended up writing anyway and throwing things out and writing more and throwing that out, and finally I wrote ‘Eye of Chaos’ I think was the first one and I realised it was pretty good so from there I started growing in confidence and started writing from within myself instead of writing for what I thought people wanted to hear. I just started telling my story and writing about things I’ve hidden from myself for a very long time. What has come out is real and raw, and I think that’s also changed my voice a lot as well because now I believe what I’m screaming.”
Evolution came out soon after The Life I Remember, with Hart agreeing that in the current music climate it is vital for a band to be regular in their output or risk falling quickly from people’s ears.

“It is a good thing to be able to stay in people’s faces,” she nodded. “Logan talks about that all the time, but it was also during the Fear Factory tour we met Max Karon who was their guitar tech, and we became friends with him, and he said he wanted to show us his riffs, so we listened, and they were really, really good so we decided to start writing together. We started as soon as we got home from tour and we all started collaborating together and eventually – he’s in the band now (laughs). It just happened that way I guess. I feel like once we get a roll on with songs we just don’t stop. It becomes habitual until it’s done.”

The addition of Karon on guitar also opened up exciting new musical pores for the band, with Hart saying part of the evolution experienced on Evolution will continue.

“Max coming in has changed things a lot,” she affirmed, “because he brought with him all of his influences which is stuff like Meshuggah and a more proggy aspect as well but it has also combined with his Machine Head elements so the sound we have now is a reflection of all of that mixed together and I feel it makes us so much more different and stronger. The first album had a lot of verse/chorus/verse/chorus but on this one, some songs go off in their direction and don’t have that structure. We’re pretty excited about where it will lead.”