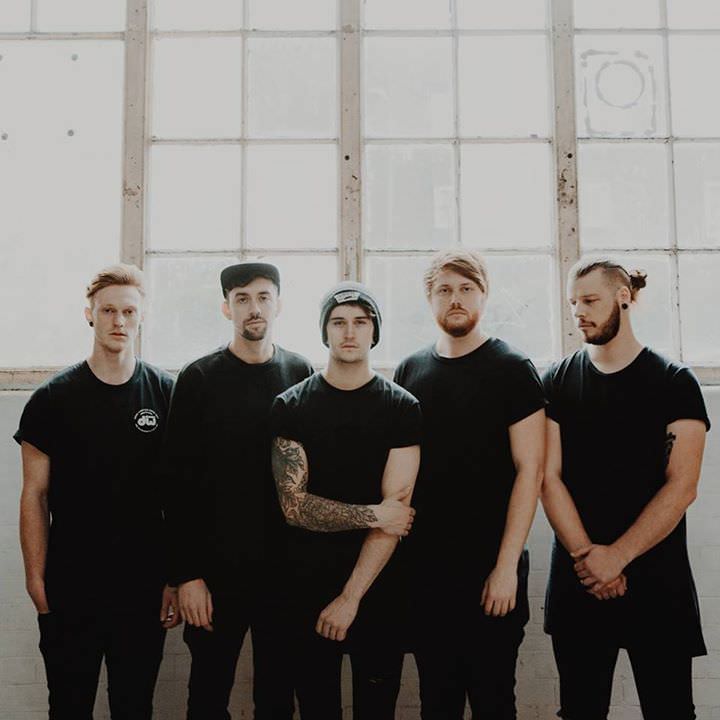 “That was the easiest part of the record,” laughed Chris Turner, founding member and drummer for Birmingham’s Oceans Ate Alaska on the blending of traditional Japanese instruments with metal music on their upcoming album, Hikari. “We stumbled upon it naturally. I was producing – I’m a producer and do a lot of production work inside and outside of the band – and I was working on a side project which was a hip-hop instrumental thing. That’s when I first wanted to use the Japanese instrument, the koto. I didn’t know if it would work putting something so traditional with electronic drums and modern hip-hop instruments because it’s two worlds apart, but to my surprise, it worked well. Then our guitarist, ‘Jibs’ (James Kennedy) came over and said: let’s put some Oceans over it, let’s put some metal in there. I remember thinking, ‘Man, that’s crazy’ (laughs). We’ve already got two worlds apart and adding the polar opposite just isn’t gonna work out well, but we demoed some and pressed play, and our jaws dropped. It just had this beautiful underlying tone, this whole dynamic sandwich going on that gave it this whole new level that we’d never had or heard before. It was just so unique, and I and Jibs rang the rest of the band and said listen to this. And they loved it, and that was it. We just said, ‘We have to do this, we have to write the rest of the record down this path’. To fit the instruments to it was the easiest, most organic, natural thing you could imagine. It’s weird how it all worked.”

After striking an abstract, yet unique combination with their music and the koto, Turner says the band looked into other traditional instruments and came up with some astonishing tones that somehow fit into their plans.

“We used something called a kokyo as well as bamboo flutes (a few different ones), and we used taiko drums, a seventeen stringed-koto – also called a junanagen – and some otsuzumi drums, which are a beautiful percussive instrument. So there’s a lot going on musically.”

By choosing Japanese instruments, there is also a regional style to them and culture permeating through the record, with sections derived from Samurai mythology.

“There are a couple of tracks that relate to the Samurai,” Turner explained. “The Japanese theme is more musically inspired as opposed to lyrically inspired, but the main lyrical content we were going for is just that we want positivity to be spread. We want people to take a lot out of this record, so the majority of the lyrical content is positive. However, there are a couple of songs that we couldn’t resist (laughs): the main song being track one. It sounds very movie score-esque, so we wanted to follow a theme and keep it relevant, and we ended up doing it about a real story and a Samurai who worshipped one particular god. Funnily enough, the more we looked into it, in every image, he was depicted holding a mirror, so it was a perfect match made in heaven (laughs).”

For their sophomore release, Turner says that as a band they have quickly learned to trust their instincts and put out music for themselves rather than expectation, and as such, is confident in reception for Hikari.

“Our main goal is to be proud of what we do,” he enthused. “We don’t sit down and think we have to keep our label happy or we have to keep our fan base happy. We experimented with that with a few singles, and all it does is dump creativity and make us all feel depressed, and we end up writing nothing or something that we hate. The biggest thing about this is we do it because we love music. That’s when we get the ball rolling and get excited and have ideas when we’re creative in our zone. It is a kind of weird thing to say, but we decided that the reason that we have fun, and the reason we got signed and got to this place, is because our musical taste is clearly shared by other people. So we just thought, ‘Fuck it, we’re writing this for no-one else because we can’t do that’. We write for us. This is our shit, and we wanna like it, so honestly, our target with this album was the same as our last album, and it’s going to be the same with albums to come. We just wanna enjoy it. We wanna enjoy writing it, recording it, listening to it and playing it live, and we do. We love the album. So I think we’ve achieved our goals (laughs).”

After releasing their debut album Lost Isles in 2015 with vocalist James Harrison, Jake Noakes has stepped in as the singer with Turner saying the result has been immediate.

“Jake has been a good friend of mine for seven or eight years,” he disclosed, “and he knows the band and we all get along well and adding him to the mix was similar to dropping in the Japanese instruments. It was just too easy. We work together well, and Jake is so open to new ideas. The creative process was so much smoother and more enjoyable and so much more creative. We would bounce back and forth from each other. On this album, the music and the vocals gel together the way we always envisioned. We feel as though Jake is just another instrument in the band. I feel that Lost Isles in places was very much music with vocals laid over the top but with this one, we finally feel like the band is complete now. We honestly could not be happier.”

While being infinitely more important, Noakes has fit in from a band perspective, it is the fans that ultimately have the final say, and Turner believes they have embraced the new vocalist, as well. The band has released two singles before the release of the album and after a tentative start fans have warmed to the new voice of Oceans Ate Alaska.”

“From what we saw it has been incredibly positive,” Turner enthused. “There are a few bands that have done the whole vocalist swap, and it hasn’t always been a smooth transition because it’s not an easy change for fans to deal with having the vocalist – the person right at the front of the band – be swapped out. It can be damaging but wasn’t in our case. It was the opposite. It was healing, and I think the fans have picked up that vibe from us. It’s been… I can’t believe how positive the response has been for Jake. Fans have welcomed him with open arms. Not so much on “Covert”, but more so on “Escapist”. “Covert” was the first song released, so people were still getting used to the change but definitely with “Escapist” people have had the chance to get to know Jake and listen to him a bit more and they have fallen in love. There are very few people not behind it, but we knew there was gonna be fans who weren’t into the new record anyway. Whether they are using Jake as an excuse, I don’t know, but we don’t mind because we love it and the majority of fans are super stoked.”

Aside from the vocalist change, Turner says there are also a few other notable changes between Lost Isles and Hikari, the biggest of which has occurred in production.

“There are a few major differences,” he conceded. “Composition wise, it was very similar in the sense we wrote it using the same composition methods, and it is still very much Oceans Ate Alaska. We have a pretty unique sound there’s no questioning that. The big differences are in the production. Obviously, we haven’t done the Japanese stuff before. Instead of filling it with… no one has ever heard me play the drums properly before this either. I used to show more off and look at what I can do but this one was more a case of no, I don’t need to do that anymore, let’s make it more about just having a good, flowing piece of music. It was nice to take a step back when kind of in that element. I mention production because on the first one we used sampler placed drums which are not something I’m about. I’m not about triggering. I don’t do it live; it’s my whole thing. I have a new drum video coming out, and it’s completely what I stand for with real, natural drums, and on this album, we had a high budget, and we recorded with Nick Sampson who is the man. I recorded drums with him, and we did the entire album 100% midi free and 100% sample free. It was all natural, and that is extremely unique in the rock and metal world. Nobody does that. So the huge, huge difference for me from Lost Isles to this album is the fact that this one is 100% completely natural audio. It’s quite staggering that we pulled that off. That’s one huge difference and the other one, of course, is Jake and the Japanese instruments.”

Usually, origin stories about a band’s name are blasé and boring, but not so with Oceans Ate Alaska who was actually struggling to find their moniker before fate stepped in.

“We were wondering what we were gonna call ourselves, and it was a case of we do this out there shit and write this crazy music and everything that we were coming up with was… when you try and force something, sometimes it’s the worst thing to you can do. Sometimes when you’re creative, it’s right in front of you, and when you take a step back, it kind of clicks. We had all these names but didn’t want to sound like a normal band because we’re not like any other band. One day we were all together and hung out, and we saw an article about a tsunami in Alaska and this tidal wave. It was the biggest ever recorded tidal wave – it was staggering the size of it. It was over twice the size of the Eiffel Tower in a fucken wave dude! That’s just terrifying and the more you read into it, the crazier it is. Only two people died. There were a father and son on a fishing trip in the bay in a little small vessel, and this wave carried them over the bay and the spit and dropped them back in the ocean, and they survived! We were just looking at this shit together and our jaws dropped. It got all of our attention, and we were like, this is fucken mad. We all looked at each other thinking, ‘You know what? This resembles our shit’ (laughs). It was out there and uncontrolled and it wasn’t your typical Alaska all beautiful and natural. It was fucken trashed. It punched you in the face, and it was probably the only one thing that we could relate to our music. Then we saw the newspaper headline which was Oceans Over Alaska, and we were like three words. Looks good, sounds good, and would make a good logo. Perfect. So it’s a newspaper headline that grabbed our attention that we could relate to (laughs).”