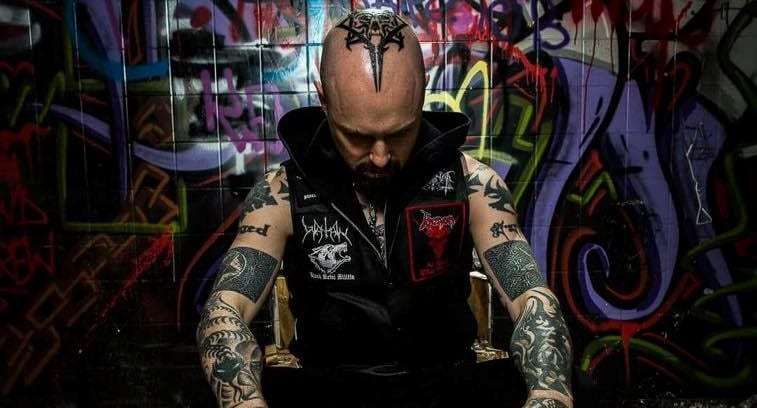 Matt Sanders, otherwise known by his nickname Skitz, is one of Australia’s most iconic figures in the underground metal scene. The Ballarat-born drummer has been involved in countless projects since 1989, where he formed deathgrind band Damaged, and has moved onto drumming for numerous groups since then. With his most recent involvement with multi-instrumentalist Daniel Tucceri, who has organised the upcoming Melbourne Drone Orchestra concert, Skitz states that he is ready and keen to take part in a project with an ensemble of guitarists creating drone music live.

“Well, it’s always interesting trying to figure out what you’re gonna end up doing”, he says. “I think good musicians tend to just lock into things automatically. Obviously, having not done this Melbourne Drone Orchestra thing before, it could be a lot different to what I’d expect. But, I’m sure I know exactly how to do it and approach it and just give it a hell of a lot of that metal drum energy. So, I’m pretty confident about this!”

Skitz then goes on to compare Melbourne Drone Orchestra to another band he has worked with called Gravetemple, which features Attila Csihar of Mayhem, Stephen O’Malley and Oren Ambarchi of Sunn O))). The group is an experimental entity that Skitz had never worked with before, and his contribution to Gravetemple has had him feel prepared as to what could be expected with Melbourne Drone Orchestra.

“With Gravetemple, that was very experimental and that was something I didn’t know how it was gonna be and what was gonna happen. But, you kind of come with a plan to put it together. So, it was still experimental, but you still have a guideline as to where you’re gonna be at. This is a bit different because, you have another drummer and we have to work together, somehow. But, we have our own little plan that we’ve talked about. On the day of the gig, you just somehow tap into it. You know, it just works just from experience. It’s purely from years of experience.”

“The guitars with Gravetemple are very deliberate and slow – it’s a drawn out process. There’s nothing frantic about the guitar playing, and it’s about making that dark ambient sound. I mean, from that experience with doing a tour in Europe and recording with them gave me a new perspective for that type of music. I had also done stuff previous to that like that with people like Shaun Baxter and Oren Ambarchi. So, it’s definitely paid off to have that ground. Because, everything else I’ve done has been prewritten music which has been black and death metal, so it’s definitely helped.”

Daniel Tucceri, the organiser of the Melbourne Drone Orchestra, has quite a history with Skitz, as they have apparently worked in plenty of groups together. With this being a new experience for Skitz, he’s confident about this upcoming concert and about Dan’s hard work he’s put into the event.

“Dan and I have worked in a few projects in the past. We did some stuff with Kriss Hades from Sadistik Exekution and we’ve done a recent recording and I play live with him in a band called Plasmodium, which is dark and experimental. He’s also collaborated with me on a few other things with me and I will be doing more with him in future. He’s super talented, he knows exactly with what’s going on in the sort of music we play, and I’ll play with Dan anytime, really. As far his professionalism goes and his attitude towards this music is, it’s all the sorts of things I’m into, as well. It’s something that compliments both of us, doing the same music, really.”

Aside from the drone material that Skitz will be working on, he also mentions that he has a number of new bands that he’s teamed up with in recording and on the stage. With the amount of collaborations Skitz has been making and all the connections he’s established with in the scene, it seems he won’t be quitting for any reason anytime soon.

“I just recorded some drums for a black, death metal project called Serpent Ritual, and that was with a few guys from Adelaide. I’ve just been working on a few different things I had never done before and there have been other bands that pay tribute to old school thrash metal and black metal like Celtic Frost and Slayer. So, the fact that I love that old era of metal is something that makes me wanna continue. There’s also another Plasmodium release that’s coming out in January or February. There’s also Funeral Moon, which I just joined and we recorded five or six tracks for some 7 inch singles, which we’ll play a few shows for, as well.”

“We’ve got a tour booked for Funeral Moon around April in Sydney, Melbourne and Adelaide, as far as I know. For Melbourne Drone Orchestra, hopefully, it all goes well. I have no idea what’s gonna happen, but it should be really good. As far as other things go, I’ll be doing a show with Oren Ambarchi in March on the twelfth of that month. I’m also finishing off the Serpent Ritual project which I reckon should be finished in a couple of months.”