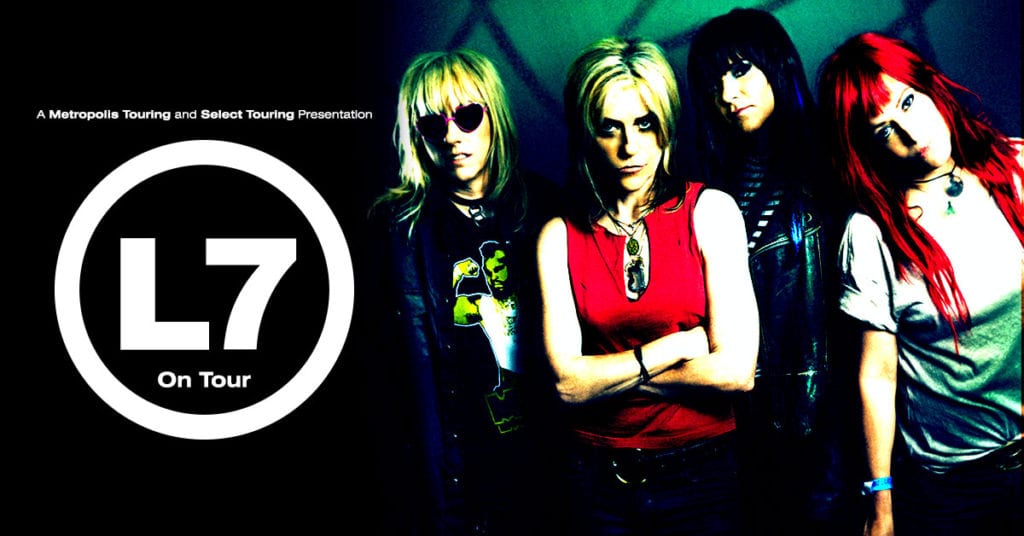 “L7 are on an indefinite hiatus. We know that’s vague, but that’s just the way it is. The future of the band is a bit up in the air at the moment.”

With that statement on their official Facebook page in 2001, all girl rock powerhouses, L7, seemingly left the music world much as they had entered it in 1985- except of course for the fact that the music community as a whole now knew exactly who they were.
Since those humble beginnings way back in the 1980s, L7 have played with and supported artists of the caliber of Nirvana, Alice in Chains, Red Hot Chili Peppers, Faith No More and Pearl Jam and had their fair share of controversy involving nudity, bad attitudes, crowd-baiting and more, but throughout it all they held firm on their underpinning philosophy – play music and have fun doing it.

It seemed the industry has lost that element of surprise to some extent, and it wasn’t until founding member and front woman Donita Sparks began to take notice of social media posts bemoaning the loss of the band that the seeds of intent began to ferment.

“Well, it certainly wasn’t a holiday!” Sparks says of the 14 years between the breakup announcement and the decision to reignite the band’s career.

“Kind of the whole wheel fell off the band metaphorically back when we decided to take a break. We had no money. We had no label. We put out our own album at the very end and our distributors went bankrupt. It was just kind of…..grunge was bloated and boring and we were lumped into that category, so times were changing and we ran out of steam. We had no money left – we could have kept going if we had more support financially and through the press and those sorts of things to keep the fans interested.”

All of these factors combined to leave the girls somewhat disillusioned by 2001 but over the ensuing years the legacy of songs like Shitlist, Fuel my Fire and Wargasm kept the band’s fan base proactive to the point that their cries for a reunion eventually reached the band themselves.

“We saw the fans being very vocal and excited on social media and posting things on YouTube and our booking agent in the States at the time called me up and said I think there’s demand for you guys,” Sparks enthuses, “and I said ‘really? We’re not even a band, but I can ask everybody and see if they are interested.’ And I kind of thought we’re either all four gonna do it, or we’re not and I also thought it was probably our last shot.

“If we’re not gonna do it now it’s not gonna happen so I planted that seed and waited for everybody to answer and I gave them about nine months to think about it and then we all decided ‘yeah, let’s go for it.’”

Perhaps the biggest obstacle to reforming a bunch of women who made their name by being brash, angry and uncontrollable in their youth was seeing if the flame and fire still burnt now they were on the north side of 50, but Sparks says that sense of humour and rebelliousness is something which refuses to fade.

“There was always a bit of tongue in cheek to our anger,” she explains, “it was like an adolescent quality to that anger which was kinda funny and it’s really fun to watch middle aged people singing Shitlist and Fuel my Fire at the top of their lungs now (laughs).

“It’s like this weird cathartic thing…. It’s weird because there’s a lot of young people in the audience too, and they still have that teenage angst and that isolation and that frustration of being a young person, and then they’re the middle-aged ones and watching them get all feisty and then they start to remember what it felt like to be that age, you know what I mean? It’s a funny thing, everybody screaming their heads off to Shitlist and it’s really fun.”

“The dynamics are great, and the middle-aged people are totally getting a kick out of the younger ones starting to crowd surf and banging with their fists in the air and stuff. It’s like oh shit, I remember doing that 20 years ago so it’s really fun.”

L7 released their last album Slap Happy in 1999 and Sparks says there are no real plans for recording anything new.

“We’re happy with our back catalogue,” she mused. “We’re being asked a lot to record some stuff, but I’m not sure we will do that. Maybe we’ll do a couple of songs next year but at this time…. I dunno…. We might change our mind but right now playing these shows is enough on our plate.

“We’re having a lot of fun, and I don’t like the idea of having that kind of pressure to top ourselves from 20 years ago. That sounds like a bummer to have to stress out about so if something happens organically, cool. If not I’m not gonna push it.”

When pressed on the matter, Donita concedes that public pressure and expectation are also major factors.

“That’s part of the whole bullshit!” she agreed. “It’s amazing to create something, but it sucks to put it out there and have people pick it apart; whether in a good way or a bad way. It’s like, oh God, we just put this out for our fans because we know they’ll probably like it and then you get all these critics saying what they think about it and it can beat you down, or it can get to you sometimes.

“So this is pretty cool with us just playing the shit everybody wants to hear that they’ve heard before, it’s fun. It’s like when the Sex Pistols reformed they were playing Never Mind the Bollocks because that’s what people wanted to hear.”

One piece of new material the girls will be releasing is a documentary, and in true L7 style, Sparks promises it will be entertaining if nothing else.

“It’s still being edited,” she apologises, “but I think it’s going to be at a couple of film festivals in the U.S in November then released after that. We just basically handed over a bunch of our home movies and videos and a bunch of photography, and we did some audio interviews for it. It’s called L7 – Pretend We’re Dead, and it’s very much a time capsule because we were filming our shows pretty much the whole time, so it’s weird. You see us go from a van to a big tour bus and then back to a van again so it’s a weird story of a band kind of making it but not big enough to make a lot of money and then dissolving because of no money so….. it ran its course, but now we get to do a victory lap which is really great!”

It would be remiss of us not to bring up the infamous incident at the Reading Festival in 1992 where Sparks now famously threw her tampon at the crowd, telling them to ‘eat my used tampon fuckers!’ after they started throwing mud on stage during technical difficulties.
That incident is widely considered one of the most ‘unsanitary’ moments in rock history by many observers, but it is more interesting to establish whether the thought ever crossed her mind that it might not be such a good idea…

“No, I never thought that,” Sparks laughed. “L7 were from an art/punk background, we’re not from a heavy metal background. We started out in the punk scene in LA gigging anywhere we could play – poetry readings, performance art shows, whatever, so that spirit of getting weird is very much a part of me anyway so when the going gets weird, get weirder!

“So we were getting mud thrown at us I was like, fuck this if the crowd thinks they’re weird let me show them weird so no, I had no hesitation whatsoever. I couldn’t wait to do it as a matter of fact.”
As for the crowd’s reaction?

“They threw it back,” she continued, “and it landed on Nick Cave’s vocal monitor and stayed there all during his set so that’s funny. He couldn’t see it because he was singing on the stage but I was at side stage, and I could see it hanging from his monitor ha-ha. I was like, oh fuck. I was horrified by that. I didn’t even know him at the time, and I was like, oh my God, here’s Nick Cave doing this serious performance!”

Friday 7th October 2016
The Gov, Adelaide
GET YOUR TICKETS HERE