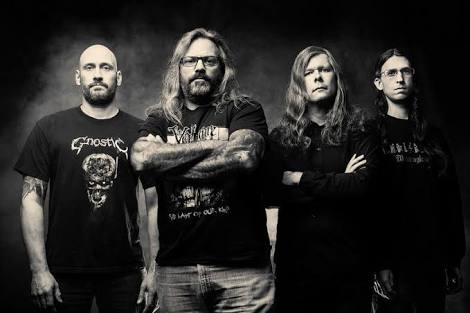 The human race has encountered a rather delicate time of uncertainty. Triggered by certain supposed “leaders” of the modern world and people in a position of public notoriety, these movements have impeded the progress of equality and essentially reiterated repulsive acts including racism, stereotyping, misogyny and general cultural disrespect to a deplorable effect.

One such controversial motion, the “Muslim ban” has incited the aforementioned deplorable behaviourisms on a global scale and has unfortunately encouraged an ignorance toward one of the most historical cultures known to humanity discovered in the Middle East. The true detriment is that the disregard toward this culture disturbingly promotes an obliviousness to historic artefacts and information which fundamentally could provide an education and reduce the fear and misunderstanding of this civilisation.

Luc Lemay, guitarist, vocalist and sole original member of Canadian technical death metal band Gorguts wants to be an educator in this field, even if it is somewhat unconsciously. The quartet’s latest release entitled Pleiades’ Dust, a one track musical composition running for 33 minutes is based on the House Of Wisdom that housed hundred of thousands of books in Baghdad and was a major intellectual landmark in the Islamic Golden Age, It was sadly destoryed during the Mongol Siege Of Baghdad over 800 years ago.

However, as Luc Lemay enthusiastically admits, the discovery of this topic was not as intentional as one might assume.

“What a beautiful topic as well right? I feel like I won the lottery with this subject when I discovered this tale. First and foremost I am a lover of books. I don’t read one hundred books a year or anything to that degree, but just their purpose and for what they are I find it very poetic. Essentially what they physically haven’t really changed for centuries and they continue to last in that format. So to write this musical piece I did it in a way to celebrate their knowledge and curiosity, that books as an object essentially are.”

He then further elborates, “For as long as I have been writing lyrics I have always spent a lot of time on them, I put countless hours of research into each lyrical topic. Anyways do you know the saying that writers and authors often quote: ‘You don’t choose your subject, the subject chooses you’?”

It is probably the basic directive for most writers, creatives, and artists throughout the world, so an enthusiastic “Yes” became near deafening from this scribe.

“That’s exactly what happened with The House Of Wisdom, that topic was waiting for me to discover it, research it and really celebrate it.”

As Arabic history is generally a topic with a very unjustified stigma attached to it, it plagued this writer to ask how it was that Mr. Lemay discovered such an incredible tale.

“Anyways to cut a long story short, a buddy of mine lent me a magazine which was basically committed to book reviews, in it I found this review of a book entitled The House Of Wisdom. On the cover, there was an ‘astrolabe’ which also appears on our record cover in the middle of the head. It is a historic scientific piece of equipment used by astronomers and navigators; anyways it caught my eye and I continued reading the review.”

He continues – “It instantly blew my mind reading this review about this incredible story of this historic Arab building which housed four hundred thousand books of the world’s intelligence. I knew that this had to be what the LP was about.”

Academics have revealed that this building in Iraq was a key center of scientific knowledge; as a matter of fact, Iraq itself was prominent in the discovery of such intellect. Mathematics, astronomy, medicine, chemistry, zoology, geography and countless more topics were researched in this centre of study by scholars from throughout the world as it was known many centuries ago. The historical significance of The House Of Wisdom located in Baghdad is unfathomable.

“This story to me is as important as the Renaissance or antiquity in Rome.” Luc admits – “The way that I discuss knowledge is in a very poetic way of the third degree. Although, in a sense, knowledge could be a single person or character when I discuss it. What I tried to describe was that this character disappeared then reappeared many years later in a completely different location, then it did what it HAD to do in a completely different community.”

“It is, knowledge and man’s intelligence throughout history has traveled from one part of the world to another and often we don’t really know how. It started in one place, whether it was art or science or philosophy and then for some reason it disappears. Then it will reappear thousands of miles away in an impossibly different region of the world. That was something I wanted to point out in the lyrics and it lends itself so well to the tale.”

Do you think this tale will enlighten people to the history of Iraq and maybe diminish the discrimination toward it to any effect?

“I think one of the main reasons I am so proud of this releaseambianceand I want to celebrate it is because of the time we live in right now. There are an infinite amount of people out there who are driven by a ridiculous prejudice toward this side of the world. It does sadden me because there is so much vital history in the Middle East that has relevancy to the world to this day and we just don’t know about it.”

He clarifies – “Unfortunately the lack of understanding really does prevent us from learning more.”

Pleiades’ Dust is a critically acclaimed masterpiece. As Luc describes, the writing of this composition was more than just four bandmates constructing a technical death metal song; it was an orchestration. Involving seven movements over 33 minutes, the musical journey crafted by Gorguts is not just a majestical heavy musical piece, it is an experience.

“It’s the first time that Iother-worldly have created a musical composition that is more similar to a piece of art like chamber or orchestral music, you know?” Luc admits – “The LP is a journey and the focus and dynamic is constantly shifting. It isn’t four guys playing their instruments as loud as they can with seldom structure, the focus moves around in a deliberately arranged construct.”
“At one point the drums will take the lead, sometimes the bass will and the other instruments will withdraw a little, but methodically. At the start, there is a minimal ambience of sorts which is just myself and Colin Marston (bassist), that is the first ‘part’ or focus for the listener.”

But surely you didn’t want to abandon the identity Gorguts has in the heavy music realm? Especially after decades of service and a legion of fans worldwide?

“Of course there are those ‘parts’ where it is all
four of us working together in unison and playing basically as loud as we can. Throughout the piece, though there are these movements that has another level of entertainment especially for the audience and it all came together in the writing.”

As if elated by specifying his artistic mission, Mr. Lemay’s voice becomes excessively prominent as he details a comparison that really defines what Pleaides’ Dust ambition.

“I’m sure you have witnessed classical music before or even just witnessing an orchestra. At times they will have a solo of woodwind instruments or brass; then the whole orchestra will come together at one ‘part’ also. That’s what we tried to achieve, a role-changing, main character moving effect; an orchestrated composition in heavy music.”

Luc is also quick to reveal that on this Australian tour supporting Marduk, the quartet will be unveiling the masterpiece in a live format. Having been translating the composition in concert form for months now, the experience has been other-wordly for the four-piece and their fans.

“I have never experienced the kind of ‘mood’ when I play live like I do with Pleaides’ Dust, because it is a composition and something completely distinct to the spectrum of three to seven minutes songs that we have been playing for over 25 years. Sure, it is a new experience for the crowd, but it is really refreshing and rewarding for us as a band.”

He is quick to clarify though that there is nothing stagnant about the band’s earlier material for Gorguts.

“Not that we are not losing our ‘mood’ or adoration for our songs like Obscura that we have been playing for nearly 20 years; it still is exciting and enjoyable to an astonishing effect. I love those songs, but this is just a different ‘zone’ for us. Pleaides’ Dust is a narrative, a story if you will. We present it and embrace it as if it were a short film; it is a different mindset.”

To finish it would only seem suiting to quote the famous philosopher Plato himself: “Music is the movement of sound to reach the soul for the education of its virtue”.

Sometimes fear is sincerely just a lack of knowledge.