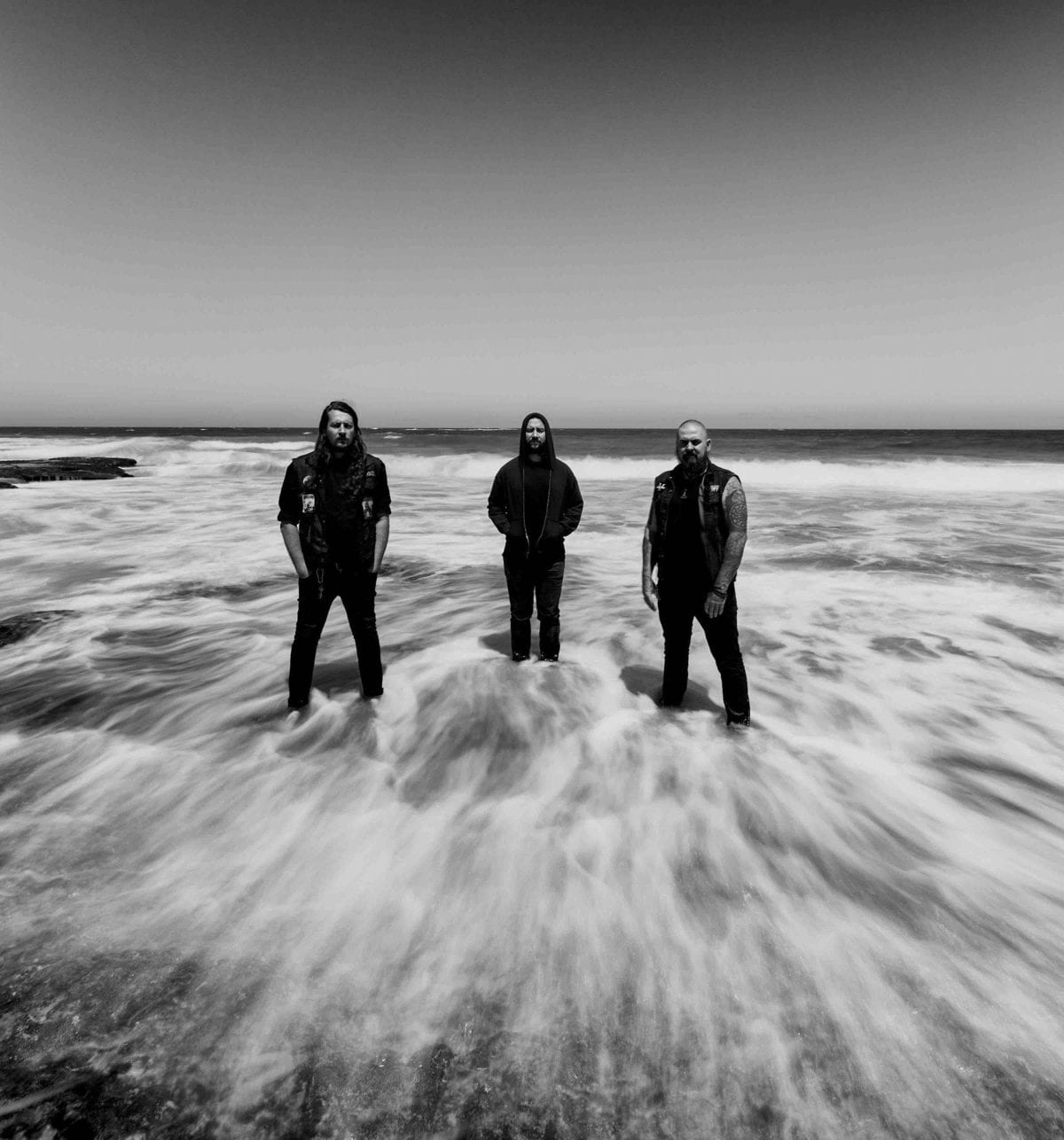 Ethereal. Powerful. Primal. Such words come to mind when describing the music of Encircling Sea, a band constantly defying the boundaries of genre-labelling and creating music that not only captivates and impacts but also remains with the listener. Having been around for quite some time now, Encircling Sea released their first full-length back in 2013, as well as two EP’s before that and, are now back in 2018 with their latest offering entitled ‘Hearken’.

” To Hearken is to pay attention – in this case to those who came before us – to their failures, triumphs, and the ritualistic junctures that defined the spiritual growth of humanity. The roots run deeply from both the trees into the earth and from man into the fading pages of history. ” Enthralled by this description, Rob shed some more light on it’s underlying meaning...“‘Hearken’ is about connecting to my ancestors, to their spiritual practices – in a way that is tangible and physically attainable for me to achieve a connection directly with them. Where ‘A Forgotten Land’ was about finding that primal spirit within, ‘Hearken’ is about nurturing that spirit throughout thousands of years of ancestry and trying to come out of it learning something about myself, and my place in this world. This concept was a direct result of my own spiritual practices and the birth of my children. “

HEAVY also had the opportunity to catch up with the founder, guitarist and vocalist of the band Rob Allen to discuss the album, the band’s journey, their recent signing to Australian label EVP Recordings and more.  “It has been a long road”, Rob admits, ” we have been really quiet for most of the last 5 years, as I have been living a 10-hour drive away from the rest of the band and concentrating on building a life outside music. So have the other members, some now no longer in the band, they have moved on to careers, kids and life and trying to make that all happen with me being 10 hours away wasn’t easy. I have now moved back to Victoria and live only 3 hours away, we have some new members and the dynamic is really great at the moment.

The record was recorded about a year ago and has been quite the journey to get to release. Our previous label couldn’t commit to releasing on the schedule we wanted to and we moved on to a local label. The experience with our previous label was great and we have no ill feelings, it was just time to move on. EVP has been great to us and working with Lochlan Watt is a pleasure. We have been friends and have worked together on numerous things over the 10 years of knowing each other, so I am happy to be working with someone I know well, and trust.”

Before getting into an in-depth discussion, however, about their latest offering to the world, I spoke to Rob about something that I had wanted to ask the band for a long time; the intriguing meaning behind the name of the band. “The name Encircling Sea is taken from the mind of J.R.R. Tolkien, in his writings, Vaiya is the encircling sea that fosters no life. Vaiya is my solo project and is also the darker of the two projects conceptually. Encircling Sea was chosen for its encapsulation of the natural world, especially for us here in Australia. The path of this band has been one of connecting to our place within the natural world and exploring that connection on a physical and spiritual level. ”  Having said this, I also asked Rob the importance of nature in his life as it does indeed reflect in the music and lyrics of Encircling Sea. ” It is and has a massive importance to me. Nature is life. I spent so long living in the city I forgot what it meant to be in nature and when I finally rediscovered that connection within myself my whole life and outlook on life changed; this automatically reflected in the music I write because whenever I’m writing, it’s just how I feel at that moment. Nature has always been a huge part of that.”

” It really wasn’t any different in terms of our process” he admitted when asked about that writing and recording process. ” We worked in the same way and in the same studio with the same engineer we have been working with for 9 years and that will probably never change. Joel Taylor at The Black Lodge is like a member of the band in a true sense. He is a dear friend and someone whose opinion and talent I trust wholeheartedly. That is will stay the same for as long as we’re a band.” Rob had also mentioned earlier that there were a lot of ups and downs during the making of ‘Hearken’, which can definitely be heard with the number of diverse moods and soundscapes on each track.  Musically there is quite a contrast between ‘A Forgotten Land’ which is more neofolk, atmospheric and progressive but heavy and ‘Hearken’ which is thicker, and this intense combination of blackened sludge, post-rock and doom. “The sound direction was inspired, like all the music I create, by my life. The ups and downs were many yes, I have fathered two children since our last album, moved state twice, changed career direction, and had to start from scratch in many ways and throughout all this, I have been trying to navigate the spiritual turmoil that is modern life. The guitar is my place to meditate, to process, to express that turmoil and achieve some peace from it. We have also had members come and go which is never easy, as you have to add new people that work within an existing dynamic. The shift in sound wasn’t really that pre-meditated, apart from deliberately wanting to write using our low tuning more to its full capability, the musical direction is something that is not necessarily planned and more facilitated or nurtured into being.”

The underlying concept behind the album is something quite incredible too; it is essentially an ode to our ancestors and the rituals that were an important part of their lives. “The track names all relate directly to each song obviously, but the words are amalgamated, to create something new from that, which is old. The name of each track is with reference to an ancient ritual. In some way, and at some point, we all have to know where we have come from, what those people were like and what they believed. This is something that can help us all learn about how to navigate life in a world devoid of true meaning. The modern world is one that rejects where we have all come from, what it took to get there and what it means for us now.”

As this discussion went on, I realised that there was a strong pagan aura about not just the music but Rob himself; I guess it’s just one of those things you instinctively feel. “In the modern vernacular, yes I consider myself a pagan. I don’t necessarily think that it correctly portrays my spiritual beliefs but then again, not much does. But yes, for the sake of not boring you all with the specificity of my spiritually nuanced life, pagan suits me fine and certainly, I am happy to attribute that to our music too. There is a primacy that accompanies the idea of paganism and that is something I connect to very directly musically and personally; a primal force within.”

The band’s ingenuity and uniqueness is also seen in their recently released video for the track ‘Elderfire’, which is visually captivating and quite powerful, perfectly reflecting the dark, raw and primal feel of the track. ” The video is born directly from the song’s concept, which is a ritual performed to connect to the spirits of the dead and enter into the otherworld, the spirit realm. The specifics of the clip were organised through discussion between myself, the director Wilson Bambrick and the curator of the Theatre of Thunder dance troupe, Megan Janet White. Together we discussed how we make this happen in a way that took into account all of our creative inputs, and in a way that best captures the esoteric elements of performing a ritual. The shaman in the clip is a dear friend of the band and a very close friend of mine. We have been involved in numerous ritual performances together and I consider him to be the best person to capture the intent of the song and the ritual described like no one else could because we have been there together before. I am beyond happy with the result, I think the dancers and Wilson our director went above and beyond to produce a special piece of art that will stand forever as something I am proud of and feel privileged to have been a part of. “

Encircling Sea has without a doubt, carved their own niche, putting all their energy and focus into creating music that evokes the deepest emotion in you while taking you on an incredible, musical journey. ‘Hearken’ is all set to release on April, 6th. Catch Encircling Sea on tour this April and May on the following dates!

Pre-orders available at this link: https://evp-recordings.bandcamp.com/album/hearken