Premiere: THE UGLY KINGS “Darkness Is My Home” Album Stream 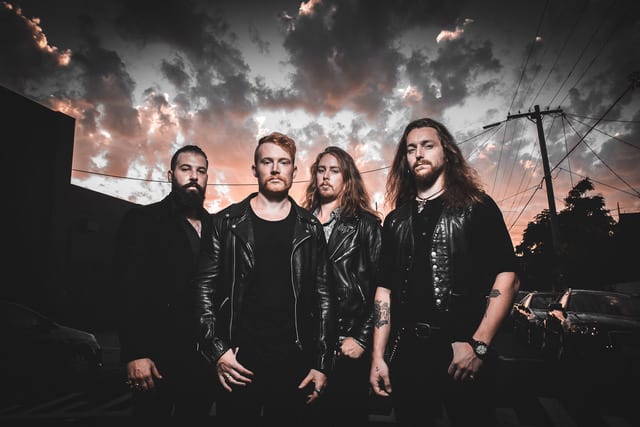 HEAVY is rocking happy with the premiere of the “Darkness Is My Home” album by The Ugly Kings.

The Ugly Kings are all set to drop their debut album, “Darkness Is My Home”, on Friday, April 13 via German label Kozmik Artifactz.

The celebrate the release of “Darkness Is My Home”, The Ugly Kings will be taking the album on the road through April and May with these dates–so mark ’em in your calendar!

Friday Apr 20: The Lansdowne, Sydney with The Lockhearts

Saturday, May 19: The Evelyn, Melbourne

Darkness Is My Home is available for pre-order now!
With three incredibly cool vinyl versions, CD and Digital

The Ugly Kings, featuring Devil Electric guitarist, Christos Athanasias, are four powerhouse blues rockers drawing influence from an eclectic and dynamic musical background.
They offer a powerful injection of energy and emotion to the modern rock scene, formulating what can only be described as power blues.
Their catchy riffs and foot-stomping rhythm lay the foundations for the deep reaching and soulful emotive vocals.
The Ugly Kings have supported Airbourne on their successful sold-out east coast Australia tour in January 2017 with great reviews and Airbourne’s main man Joel O’Keefesaying of the band;
“Great show! The Ugly Kings have really got their own thing going on and it rocks! I love all the dynamics, pushing and pulling and then always smashing it out. Great intensity and power.”.
They also supported Rival Sons in 2016 on their first Australia headline side-show in Melbourne during the Black Sabbath ‘The End’ World Tour & were asked directly by Papa Roach to open for them on both their Melbourne shows in January this year.
The Ugly Kings are Russel Clark (Vocals), Christos Athanasias (Guitar), Nicolas Dumont (Bass) and Andy Alkemade (Drums)
The Ugly Kings are for fans of The Doors, Jack White, Black Sabbath, The Black Keys, Royal Blood and Rival Sons.