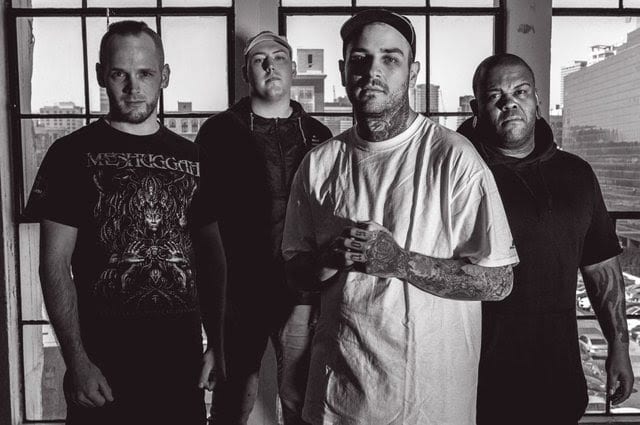 “Everybody wants to have a voice, that’s what it boils down to,” spat Emmure vocalist Frankie Palmeri when asked about some of the more controversial moments in the bands’ career. “And the internet, when you’re upset, is a great place to have that voice. If you don’t agree with something it gives you a pedestal so you think now I can say something, now I can have a voice, now someone can notice me and how I feel. That’s what everyone wants. They want to get recognised and noticed for who they are and how they feel and that’s fine, that’s normal. I’m not better than anybody, I totally get that but what people choose to focus on is not my prerogative. I can’t say whether or not I agree with it; I just don’t care. People are still gonna feel what they wanna feel about whatever it is, and I can’t dictate what people are gonna focus on or care about. Whatever people wanna get fucken hung up on that’s their prerogative, I don’t give a shit. Obviously, I don’t think every step of my career has been top notch. There’s been a lot of mistakes, and I’ve learnt from them all. I’m not the same person I was five years ago; I’m not the same person I was six months ago so if people wanna get hung up on things from the past go ahead. It doesn’t hurt me. I’m always changing and always evolving, and I have been able to take away the positive things from the experiences I’ve had in life. If people wanna try and shut me down or be negative, that’s their deal. I don’t worry about it too much.”

One thing Palmeri does worry about is his music and with Emmure’s seventh album, Look at Yourself, out this month he is optimistic about the album and the future.

“There’s a lot to say I guess about the album,” he smiled. “It’s a brand new album for the band with a new line-up and a new label. There’s all kinds of new energy going on so. obviously it’s creating a new air for me and everyone involved, and we’re all interested and excited about the future.”
“Our goals were pretty simple with this one,” he continued. “We just wanted to make a record that we are proud of and one that I can put on and enjoy and other people can hopefully as well.”
The title, while hinting at being a personal statement, is intended to be more of a piece of advice and indication of where the band is at musically and personally at this stage of their career.

“It’s not so much a statement as an appropriate title for the album,” Palmeri mused. “The theme of the record is loosely a very introspective one. We talk a lot about how I feel about myself or how I have felt about myself; the things I have been through in the lead up to the creation of Look at Yourself. Every Emmure album is like a little chapter of my life in music form. Everything was deliberate from the title to the artwork to the structure. It is all pertinent and relevant to each other.”

As his career progresses, Palmeri says it is hard to say whether the writing process alters, but is adamant that the reasons behind why and what you are writing stay consistent.

“I feel inspired in different ways as I get older,” he shrugged. “I find myself pulling from different places creatively as time goes on so does it get harder or easier? I can’t say. I don’t wanna say it gets easier because that’s not true and I don’t want to say it gets harder because that’s not true either (laughs). I think it becomes more challenging but not in the sense that I’m running out of ideas. I keep a high standard of what I am going to put out there which I think is a good thing. I don’t think anyone can look back at what we’ve done over the years and think it’s perfect because that to me would show we’re not growing or learning anything. I think I have grown and learnt a lot from the music I’ve made and the records I’ve put out. It all shines through in the music. You can feel our growth since the last album.”

Emmure’s music has drawn heavily from bands such as Limp Bizkit, Korn and Slipknot, but rather than shy away from the obvious, Palmeri prefers to embrace and acknowledge the effect bands such as these have had on his music.

“Those bands played such a huge role in all of our development as artists,” he said proudly. “Bizkit is probably my favourite band of all time, and Korn is right up there probably as number two. These are the bands that turned me on when I was a little kid, and I never let go of that feeling. That’s the vibe I wanna create. I want my music to be fun and exciting the same as it was for me when I grew up listening to records. I want that same experience for other people – especially people who like our band. I hope that these influences shine through.”

“The way that I look at it,” he continued, “is as long as I identify with what I’m doing then that’s all that matters. You’re gonna hear influences in our sound regardless. No matter how hard we try to put our own coat of paint on it, we’re always taking from what we learned and loved growing up and figuring things out for ourselves. I think where your identity comes from is more a time and place. I’m sure bands that were influenced by The Beatles probably didn’t sound like The Beatles, but you can see where they’re coming from. We might say we’re influenced by these bands, but I don’t hear that at all. You put it down to what it is you’re trying to get across. We are just making music that we enjoy. I can only create what I enjoy, and it’s up to other people to take out of it what they will.”