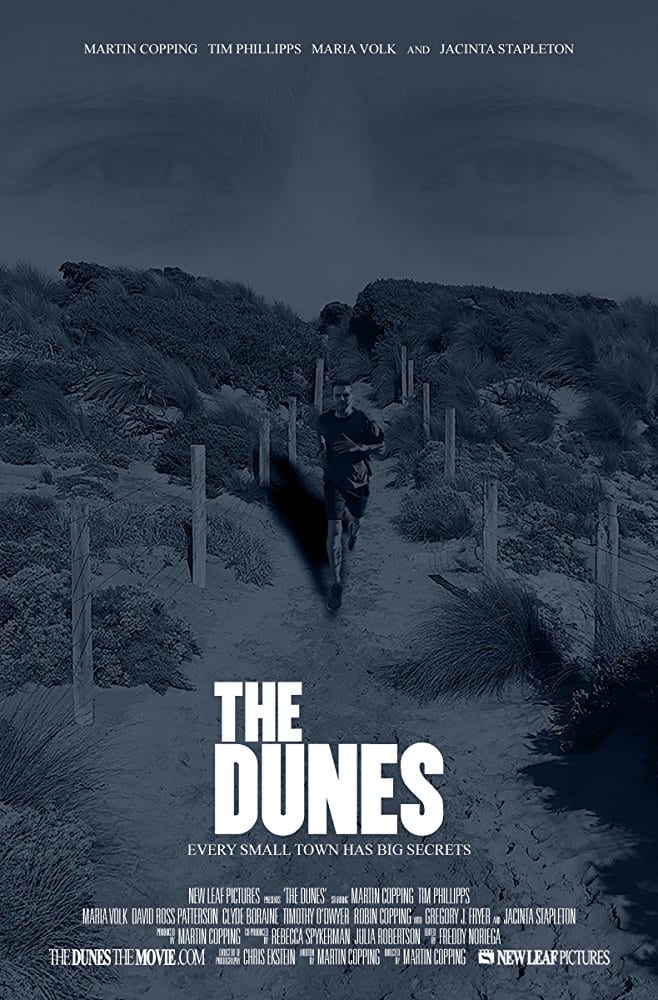 When Heavy Mag chats to Australian actor/filmmaker Martin Copping, he is eating a late dinner in Los Angeles after a hectic day on set. He is tired but wants to chat with us about his latest project – a new Australian feature film called The Dunes. The Dunes is a film close to Martin’s heart – not only is he starring in it but he is also directing it and wrote it about a topic very close to his heart.

Martin made the move to L.A after featuring in Aussie television shows like Neighbours, Blue Heelers and Ocean Girl. Since arriving in American, he has acted in films like Zombie Hunter and Battle Ground as well as lending his voice to the popular video game Call Of Duty: Infinite Warfare.

“It’s a psychological thriller that I wrote about six months ago,” says Martin when I ask what The Dunes is. “I very sadly lost my Mum last year to alcoholism, and I guess during the process of grieving her and coming to terms with what had happened I wrote The Dunes, and it explores a lot of the things that I have experienced during my life through people close to me – things like substance abuse, alcoholism, drug addiction… I have lost a lot of friends to drugs and alcohol, and the main protagonist is suffering from some of these afflictions. I guess that is what originally sparked the idea and then it just developed into a script about a journalist who returns to Australia from Los Angeles and this mysterious figure from his past appears and threatens his whole existence.”

I ask Martin what it is like writing a screenplay from such a personal place and he says “This one came about pretty quickly. I had been a relationship with a girl that had ended and through the process of that I sort of became very self-reflective and I took a look at a lot of my personal traits and my relationship traits and I realised that a lot of them had been formed because of my relationship with my Mum who was battling a lot of her own demons. It was all sparked very, very quickly and I ended up writing the script in about two weeks… it was all very intense but I didn’t feel like I had an agenda with it. I’ve written a lot in the past so I do know a lot about story structure, so I really gave myself my own freedom to explore my own personal journey throughout the medium. I guess at the time I didn’t really know what I was going through but it has been more now a majority of the film has been shot and I have been reflecting on it that I have realised the impact that it is had. It has been very healing for me but I also want to start a social conversation about substance abuse and addiction and this film has been a wonderful vice to do that. On our Facebook page I have had a lot of people write and tell me that they have lost people through substance abuse so it has been a very interesting journey.”

The Dunes has been filmed in one of the most beautiful parts of the world – Victoria’s Mornington Peninsula and I asked Martin how the shoot went for the film especially given that he was both directing and acting in the film. “I don’t know how I got through it, to be honest with you,” he says laughing. “I always spend my childhood holidays down there on the Mornington Peninsula and now I own house down there, so it was a great opportunity to get a lot of my friends who are cast and crew to go down there. They are all incredibly talented, and I definitely couldn’t have done it without them. I tried to surround myself with the best cast and crew that I had access to and I guess truth be told they propped me up a lot of the time because I was very overwhelmed and under-manned but you know the people that did come on board were just incredible, and they got me through it. I didn’t have an assistant director on this, but the cinematographer was a good friend of mine, Chris Ekstein, who is based in Los Angeles. He is fantastic, and we had an interesting way of shooting it, we had the camera on a gimble so the entire film was handheld and I was very lucky that he was willing to accommodate the way that I wanted to shoot it because I was flying by the seat of my pants and I couldn’t afford a very big crew because I was doing this on a shoe-string. I have to give a lot of props to the DP on this one.”

That brings us around to talking about the cast – something that Martin is very excited to talk about. “I am very, very lucky I don’t know how I pulled that off,” he says laughing again. “The other lead is Tim Phillips, and Tim has been an incredibly close friend for ten years, we moved to LA together at the same time, and we went through the trenches here, and now Tim is back in Australia, he had a contract on Neighbours, and he did that and then he got married. He is incredibly talented, he got his big break in the Animal Kingdom and he kept climbing the ladder from there – he was amazing. We also have Jacinta Stapleton who I’m sure everybody knows; she is a veteran Aussie actor. She was extraordinary. We have Gregory J. Fryer from The Sapphires who was a pleasure to work with; he’s just a great guy and a lot of fun. And we had Maria Volk, Aussies know her as Marsha Vassilevskaia but her reps out here wanted her to change her name, but she has been a friend of mine for a long time. With the rest of the cast David Ross Paterson is a friend and I have done a couple of films with him, Clyde Boraine is another Aussie actor who has been fantastic and then one of my best mates, Tim O’Dwyer who I think is one of the most under-appreciated comedic actors in Australia, he is one of the funniest people that I have ever met. So yeah it has been amazing and you know these guys have come on board to do us a favour and I think it has really paid off with the film. I couldn’t be happier with all their performances.”

The unique thing about The Dunes is that anybody can be involved with the film and Martin tells me how. “We’ve just started a Kickstarter campaign to raise funds for finishing the film,” he says. “We’ve shot eighty per cent of the film, but we still have twenty per cent to film in Los Angeles which we are hoping to film in November. I have a link if you go to www.thedunesthemovie.com and that will send you straight to the Kickstarter page, and the best way you can help is to pledge a little bit of money, no amount is too small, and we are super grateful for anything that we can get. We do have a target of $50,000 and if we don’ get that we don’t get any of the money and I think we are at about $20,000 now. Apart from pledging though you can just go to our Facebook page, just type in ‘the dunes film’ – you can do that on Facebook, Instagram or Twitter and just share it with your friends. Take a look at the content and if it speaks to you share it. There is an important message behind it, and it is a message that is important to me, as I said earlier I want to keep the conversation about substance abuse going. I’m not a sober person; I don’t preach sobriety, I think it’s good for us to take a look at ourselves and keep ourselves in check.”

You can help out The Dunes by pledging at www.thedunesthemovie.com