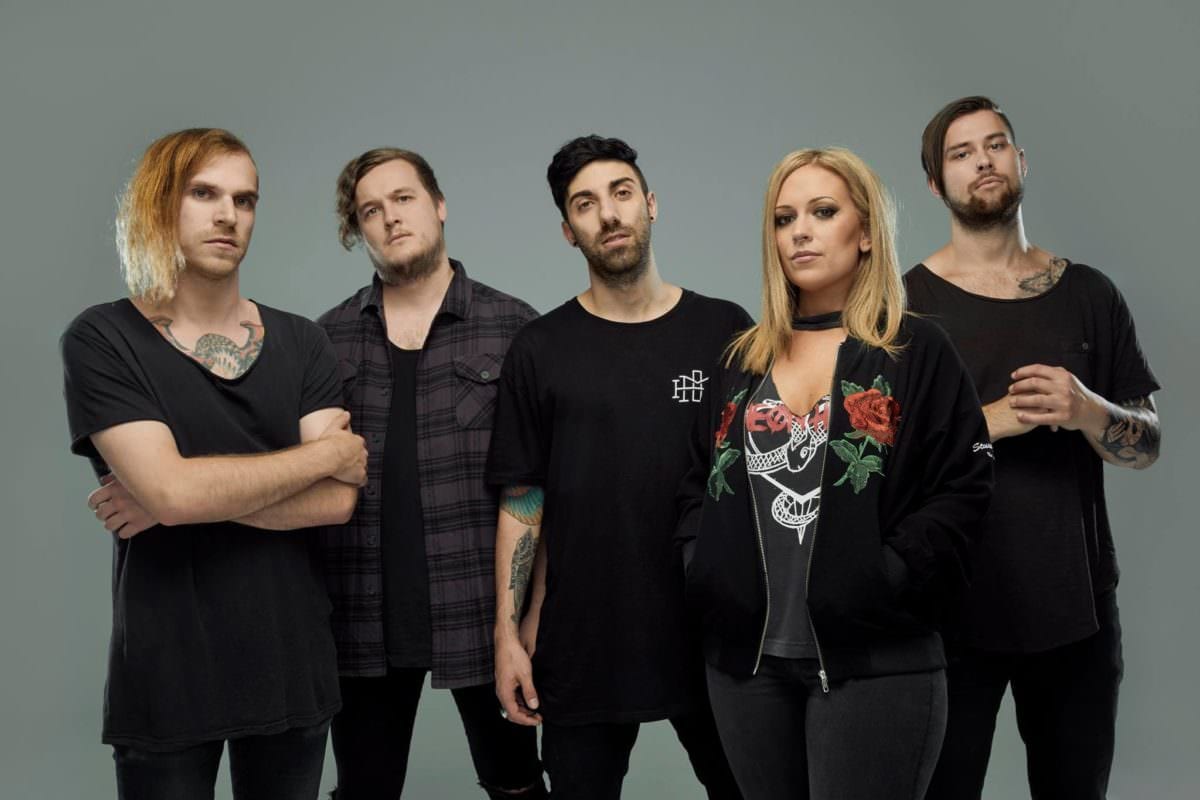 Between a busy schedule promoting their latest single “Bend/Break” and preparing for a proactive tour to follow, lead singer Alex Reade of Melbourne-based post-hardcore band, Drown This City found some time between band practice sessions to talk to Heavy Magazine about the group, music, being a female singer in a music genre where it isn’t all too common, the upcoming tour and single, in addition to the band’s humble beginnings.

“Our bass player [Michael Furolo] and drummer [Anthony Pallas] used to play in a band together, and before that, I used to play in another band with our bass player, so we just all knew each other through music and the scene. One summer, we were all hanging out about – two years ago now – and none of us was in bands that were active, so we thought we would write music together. It more or less happened naturally from there. We were just writing electronic music strictly on the computer and never had intentions of writing heavy music, and then we just ended up creating this… this crazy song; and it turned into Drown This City. We never really planned for it to happen, but it all came together rather quickly. I mean, we’ve only been together just over a year now, but we spent about nine months beforehand just having fun, writing five songs and being informal. It wasn’t until we released these songs that we thought, ‘Oh wow, we better step up and become a real band because people are actually listening to these songs’, and so we worked really hard after that to form what we have. ”

Given that the band has only been together officially for a little over one year now, they’ve achieved tremendous success in the sense where they have already accumulated a following of close to ten thousand online followers, which some bands who have been together for years have struggled to reach the halfway mark. For all this, Drown This City’s fanbase keeps growing by the day.

“You can get a following on social media if you work really hard, and that’s what all of us have been doing. We work hard on our social media, we work hard on our PR, and we worked very hard to get the attention of as many people as we could, which has translated to a lot of attention online, a lot of plays, and a lot of page likes. But at the same time, that’s no guarantee that people are going to come to your shows. Even though online, everything is very polished and we’re really happy, we really want to work on building a fan base that we can rely on that we know genuinely love our music. So it’s both good and bad.”

In the world of post-hardcore music, female vocalists are not a common find. Reade was asked what it’s like to be one in the field.

“There’s a lot of female vocalists in rock, female vocalists in metal, but not so much in metalcore, but post-hardcore is unique, and I don’t know why there’s not that many women in this particular genre. I was very nervous coming into it as there’s a lot of males in this particular genre who have a particular style – very powerful and clean – and I wanted to make sure I sounded like that. But when we were recording, I realised that I don’t sound like that at all, and I’m never going to sound like a guy or like any of the vocalists I’ve worshipped, so I’ve had to let it go and not really care. We’ve definitely received a lot of criticism: a lot of people saying I don’t belong in this scene, a lot of people also saying I do. And not to bring attention to the fact that I’m a female, I don’t think that you can really win. I just ignore it now and focus on making great music and not care what people think anymore.”

Drown This City most definitely has their priorities in order and hasn’t let anything get in the way of their music or professionalism. As mentioned, they have just released their latest single “Bend/Break”, and Reade was kind enough to tell us about the recording process.

“We recorded externally for the first time with a producer who’s a good friend of ours, and we stepped outside ourselves for the first time to record with someone who’s professional and experienced and guided us in working together. So we actually got it done rather quickly, and it was just wonderful. So I think that this was the first time we’ve all sat back and heard a song we’ve all equally collaborated on. We’ve got a new vocalist who’s also on this song which gave a lot of depth and heaviness to the vocals, and that’s our guitarist and second vocalist. The reception has been really good, and we actually put a film clip out last week, and it’s all just awesome. When we first started, people kept saying: ‘Yeah, they’re interesting but can they back it up, can they write good music?’ So this time around, we tried to write a really good song and so the feedback has been genuinely positive, so we couldn’t really be happier.”

From this single release, the band has an upcoming headline Australian tour, beginning on July 14th, 2017.

“I think it’s going to be a good tour, it’s a small tour, and we’re putting it all on ourselves. So we don’t have anything flashy to offer apart from just putting ourselves out there and getting out there and trying to meet people who haven’t seen us yet and try to prove ourselves and build more of a fanbase. This tour is our first headliner tour, so it’s going to be very different. The last time we toured, it was with Falling In Reverse around Australia, which was a very fancy tour playing in front of hundreds and hundreds of people at the best quality venues. So I think this is going to be really wonderful because we’re doing the hard yards, paying for everything ourselves, organising all the shows ourselves, and all the pressure to succeed and reach out and get people down to the show is all on us. We have no idea what’s going to happen, so it’s a big risk, but it’s very exciting at the same time. But every weekend for the next two months, we get to all fly out to a new city and play shows, so there’s literally nothing else we would rather do as a band, so it’s just amazing.”

Drown This City is definitely shaping up to becoming Australia’s leading post-hardcore band, and if they’re playing in your city, it would be wise not to miss any of their shows on their upcoming tour. Until then, we should all go and add their latest single “Bend/Break” to our music collection. Keep an eye out for what’s to come next with this fast-paced band.