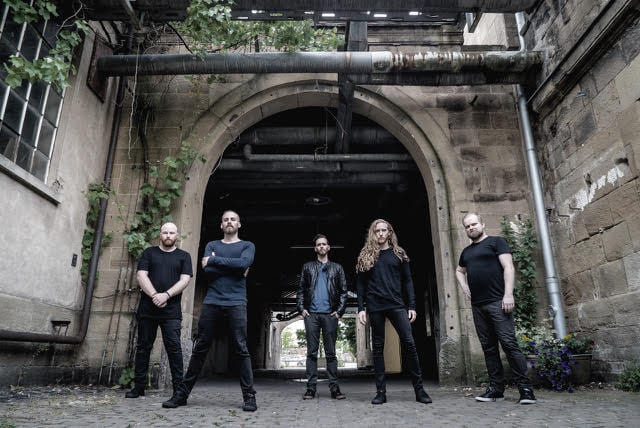 The last few years has been an absolute thrill ride for Caligula’s Horse. The release of their albums Moments From Ephemeral City, The Tide, The Thief & The River’s End, and Bloom has seen the band gain a legion of fans in Australia while tours of Europe with the likes of Opeth, Anathema and Pain Of Salvation has ensured that success has been mirrored overseas as well.

Now the band is heading into another frantic period. First, their fourth record, In Contact, is about to hit shelves and then they are heading out on the road for a tour that begins in Perth on the 28th September. HEAVY caught up with vocalist Jim Grey to see what the band’s fans can expect.

When we start talking about Caligula’s Horse massive rise over the past few years, Jim admits it has been a surprise for them. “It took us by complete surprise, I suppose,” he says with a deep breath. “I mean, given that the band started off as a one-time thing, it was never intended to be an actual line-up or anything. It was just Sam and me doing a little one-off project, so the fact that we are even having this conversation now is a testament to the surprise that is.”

During that period, we have seen Australian music fans really embrace the progressive rock scene, but Jim says he feels that seems to have happened right around the world. “For me, it hasn’t so much been a change here but a change internationally,” he says. “There has always been a hot-bed for progressive and alternative music in Australia for those that have known where to look and that culture has always had its peaks and troughs just like anything else, but the most distinct thing that I have seen is that overseas now there is a real flavour for Australian progressive music. That has happened even more so over the last couple of years since the first time we went to Europe. So now you have trailblazers like Karnivool, and that is a big example of somebody who has gone out and really paved the way. Now there are people out there are thinking, ‘I wonder what is happening in Australia, I wonder what the next big thing will be to come out of Australia?’ So there are people out there looking for us and looking forward to us going over and doing shows. It’s a very exciting time for music that might be a little bit left of centre in Australia, for sure.”

With that in mind, we turn the discussion to whether or not Jim thinks the band will be in for a very different reception when they head across to Europe next time. “It’s been different every time, to be honest,” he says. “This time we got to play with some established bands like Opeth, and we got to play at some awesome festivals that were great to play at, so that was very different to the club scene that we played in last time. Particularly, on the back of In Contact and these shows that we’ve been over there recently to play, we’re optimistic about what will happen for us next in Europe. So I suppose we’ll see what 2018 holds really.”

With talk turning to the brand new album, Jim admits the band wanted to do something different this time around. “First and foremost, we wanted to do something different,” he explains. “Just like every other time we had released an album, we wanted to take a step forward, and we wanted to change the paradigm a little bit. We were asking ourselves: ‘So, what was missing from the last album and what would we like to add to the next album?’ So we set ourselves about writing something a little bit heavier and a little bit darker in its mood. I think we’re established as a writing team now, so that seemed really natural; it really felt like that process was just a natural flow. One thing just led to another, and every idea seemed to click into place with the next. The concept itself seemed to just fit into what we were writing, and it just flowed out by the end.”

Jim quickly adds, though, that a musician writing something darker is not the same as an actor having to get into a dark place to play a dark character. “For me, it was more who we are individually and what our experiences are anyway,” he says. “It’s not like I’m conjuring dark spirits or sitting alone in my house, shooting up heroin and crying into a cup to save my tears – as exciting as that might sound. We feel frustrations and stress in our lives, and, of course, as musicians playing the kind of music that we do, it’s a difficult trot; it’s rough out there. And we want to keep this thing running as long as we can, so we can express ourselves artistically as freely as we can, so when we run into those constraints, that frustration comes out of us as music. So it’s really more of a reflection of ourselves rather than us trying to create something else. That being said, there have been times in the past when we have been trying to do a certain type of performance in the studio that requires me to be in a negative headspace, but I’m trying to avoid that in the interest of self-preservation.”

One of the ways that In Contact has been described by critics so far is that it is a ‘personal-feeling’ album and Jim agrees with that. “It was a journey that is, for sure,” he says. “We always set out to write something personal, and we always set out to make sure that the writing reflects us as people. I think that our life experiences over the last few years have been so varied and now we don’t even have to delve into fiction to have a broad range of experiences on the album. But it definitely reflects things that have happened in my life, like being a father now means it is a very different life that I am now living and these kinds of things do find their ways onto the album.”

When our chat turns around to the tour, Jim admits that he is excited about being able to perform the new tracks from In Contact live. “Ever since we finished recording the album, I have been desperately waiting to be able to perform these tracks live. I’m really excited, actually,” he says. “People can expect to get a flavour of all of the C-Horse albums. In fact, we are going to be playing some stuff from our back catalogue that we have never played that are coming into the set, which is really exciting. There are also a bunch of tracks from In Contact that I am just really hanging out to play live. They’ll be explosive and fun!”