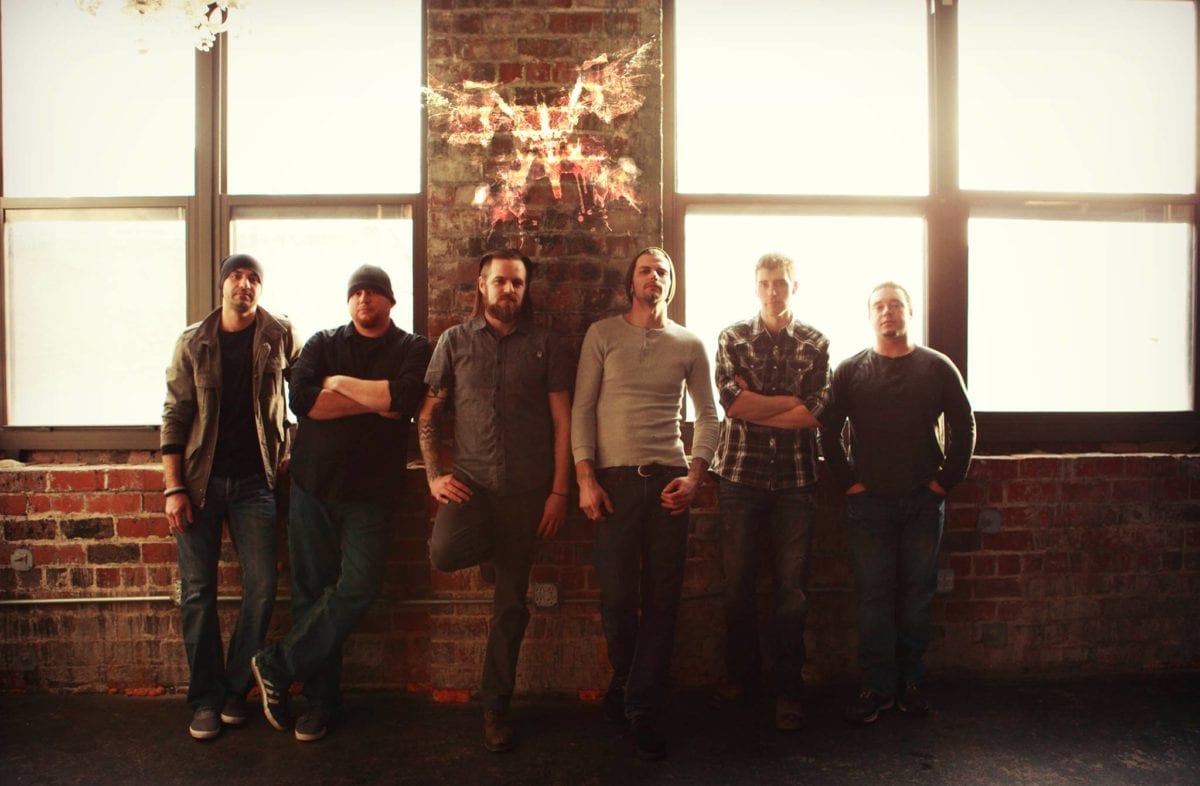 There is always something special about being able to sit down to a band that manages to deliver a truly amazing debut album. One band that has managed to do that this year is Burden Of The Sky – a good old-fashioned metal band who hail from Bloomington, Illinois. Their debut album Cinis Ad Cinis has been getting rave reviews right across the planet so we caught up with lead vocalist Brian Barry to find out a little more about the band and the hard work that has gone into this debut album.

“We formed back in 2013,” says Brian as he starts to tell me about the history of the band while his kids play around him. “I was playing in a different band and our two guitarists Josh and Brad were scoping the whole state of Illinois for talent. I actually live about two and a half hours away from them and I just happened to be in Bloomington one night and they came to a show and saw me, then they contacted me a few weeks later and asked me if I wanted to start this project. They sent me some stuff, I liked it and then we started jamming together and then shortly after that we added Dustin and Rick and then a couple of years after that, when things still didn’t seem right, we decided to add a keyboardist. That was our band completed in about 2015 and shortly after that we recorded our first record, Cinis Ad Cinis, which we have just released. Things are starting to take off and that is really cool.”

Brian still lives two and a half hours away from the bulk of the band and he says that it does make things interesting sometimes. “Actually Mike, the keyboardist, and I both live about two and a half hours north of everybody but it works for us,” he explains. “Most of the time the guys that live down at Bloomington will write most of the music to it and then they will do things via email. They will email the tracks up to us and then we will write our parts and if there is anything that we think needs to change we’ll let them know and say ‘hey this is the way we want it to sound’ and they do it. You know I work with talented enough musicians that all I have to do is tell them ‘this is what I need you to change’ and it always turns out exactly how I want it.”

When we begin talking about what got Brian into heavy music he says Nirvana was a huge interest on him. “When I was young I saw pictures of Kurt Cobain and that was it for me. I started listening to Nirvana when I was about nine or ten years old and I saw pictures of Kurt Cobain and I just thought he was the coolest thing in the world so I started playing guitar and that kind of opened my eyes to heavier music. I was also a big Metallica fan for a long time and from there branched out to the Nu-Metal stuff, stuff like Korn and Limp Bizkit, in the 90s and from there I started looking at a lot more underground bands, Dope and Nonpoint, stuff like that. But yeah I was probably about nine or ten years old when I first started listening to heavy music.”

We start talking about Cinis Ad Cinis as an album and Brian decides he should start by telling us what the title means. “The title is Latin for ash to ash,” he says. “This album is kind of a reflection of myself. This is my story. I have had a lot of tough battles in the past few years as far as addiction goes and just life in general. This is very much my story as it went from about 2011 until now. You know it is incredibly therapeutic to write it out. You know you have these thoughts in your head and these are the kinds of things that you would normally keep to yourself. But it gets very therapeutic when you can sit down and put it on paper, then turn it into art and then share it with the world. I’m not the only person to go through these struggles and we’ve had a lot of fans contact us and tell us how our songs have helped them through something that they were struggling with and there is no greater feeling in the world then when we get one of those emails or if they comment on something and tell us that we have helped them make their lives better. We are very tight as a band and there have been times over the past few years when they have wanted to strangle me because my actions were not very good, but they were right next to me while I was going through that and they did everything they could to help me and save my life. So when I handed them these lyrics to sit down and go through a lot of them weren’t a shock because they were right there and saw everything that happened. They saw me change from somebody that they were close with to somebody that they didn’t even know, then back. So, it wasn’t tough. I have always been very open with it and they have always supported me one hundred per cent so when I handed them those lyrics they were very much on board with it because they saw what I went through.”

Brian also says that an excellent producer helped make the recording process a lot easier. “Our producer is one of the most talented people that I have ever seen in my life. Not just as an engineer or a producer but as a musician. In my opinion when you are looking for a producer for an album you need to find someone that can play through it – somebody that is a musician and has written music before. They need to know what people are going to like and they need to know what you are going to like. They also need to know what you are going to be happy with. Our producer’s name is Colt Capperrune and he is currently out of Nashville, Tennessee and he just a phenomenal job, not just producing and engineering but dealing with us in this process because while I live two and a half hours from the others, his studio was another hour past that, so it was close to four hours for me and Mike to get down there so him trying to schedule around our schedule it got kind of scary especially when we were getting to a deadline. For the most part it was very long, it was very tedious, he didn’t leave out anything. All the details were covered and he made sure that the recording process worked and we loved getting together and listening back to everything. It was a lot of fun recording this album and I can’t wait to do the next one.”