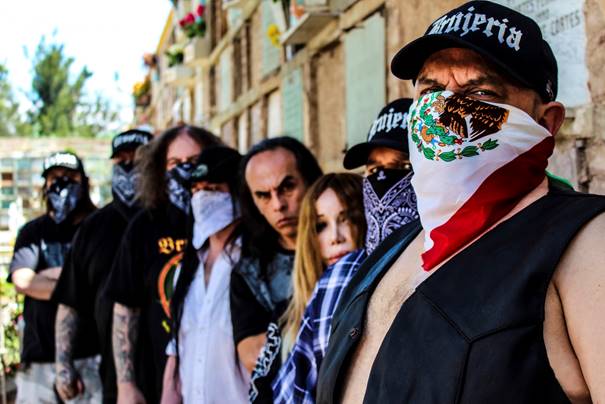 ““Everything was going well in the world… 9/11 happened.”

The band Brujeria is similar in a number of ways to a strike force team. It’s as if they engage in a battle when there is a common enemy threatening our peaceful lives, and then quietly disband when the wrongs are righted.

The main difference is that strike forces are stealthy and strike hard and fast, Brujeria prefers to get in people’s faces and make a statement so loud in itself that people are forced to act.

Put simply, one takes out the problem silently and with a minimum of fuss whereas the other prefers to systematically dismantle the enemy in plain view and bring them down to the people’s level through sheer weight of music and knowledge.

Neither is a particularly pleasing option.

After rising from the ashes of a turbulent period circa 1989, Brujeria, hailing from Mexico, set out with a goal of providing information to the masses through music and attempting to educate rather than incriminate the minority group to which they were a part of.

Debut album “Matando Gueros” was a timely kick in the teeth to all of those who supported racism in any way shape or form and made an emphatic statement that the underdogs would once again have their day.

From the outset, the members of Brujeria wore masks and presented themselves as bandits, not in a statement of intent, but more so in an attempt to let the music speak for itself and be the focal point rather than the people behind it.

“We’ve always worn a disguise,” explained Juan Brujo, vocalist and founder of the group. “We don’t want people to know who we are. We don’t use our names. We’ve never done this to be famous or to try and make money off it. When we started playing live it was like ‘let’s wear the masks’ and I took the machete on stage just to prove a point; to prove that what we stand for is real. We liked what we were doing, and it grew from that. Believe it or not, our shows are positive – they energise people – and people leave happy and in a good vibe. It starts off weird but in the end everybody is happy and enjoying the show. I really can’t explain it; it’s just something you have to experience. We’re not out there trying to be negative or scare people. We really wanna have the whole Mexican party thing where everyone knows what’s happening and is happy.”

“There was a lot wrong with the world when we first started. Back then we had to put records out just because things were wrong,” he continued. “The Governor of California, for example, was a racist guy trying to get away with things, and everybody hated everybody. Everybody had an excuse to hate everybody. We just provided a voice for those people.”

For the last 16 years, however, things have been quiet in the Brujeria camp. Aside from the occasional live performance, there has been little heard from the band, especially in the form of new music, but Brujo says that this was more due to there not being a need for the musical justice of Brujeria more than anything else.

“Everything was going well in the world,” he explained. “9/11 happened, and it was like what can you do with that? That was weird so we let it go. Nothing bad has really happened so we decided we should do another record, and we had a few problems making it happen so it took a while and now this Donald Trump guy shows up and everything’s gone to hell again.”

But more on that later…

Brujeria’s latest release, Pocho Aztlan, due out September 16, is similar content-wise to the bands preceding albums, but according to Brujo while the problems remain the same, so will the material.

“The title of the album is made up of two words put together,” he said. “Pocho is a word that Mexican people from Mexico call the Mexican guys that are born in the United States. It’s a bad word – like calling them trash – and as I was born in the U.S every time I go to Mexico they call me Pocho but when I’m up here, and people don’t wanna see me it’s like ‘go back to Mexico’, so I’m not wanted either here or there! I’ve got nowhere to go. Aztlan is the old mythical promised land of the Indians, so when you put it together, it’s like the unwanted trash guys promised land ha-ha.”

“With every album, we like to tell the world about our situation as it relates to the world. The drug dealing, the illegal’s entering the U.S., things like that. We talk about bad things that religions do – each record has the latest updates of what’s going on with that stuff so every record we do has a couple of songs about things like drug dealing and what is going on now in those situations. Its current stories of the old songs I guess. There’re some funny songs too. Basically, every song is like a story so there’re some fun stories there too. We liven it up a bit.”

With subject matter that is based on the fact there is always the potential for some people to get offended and over the years Brujeria has garnered their fair share of controversy, but according to Brujo, the band will never censor their material to make any one person or persons happy.

“I don’t listen to that,” he fumed at people who want them to tone down. “We started the band to make a point. We never made it to be rock stars or go on tour. It was more let’s put out records and tell people how it really is because there’re too many people with no idea what’s really going on. We’ve always just done the records, and we don’t care what people think. We don’t use our names so people can’t think we are trying to get attention. Then somehow we got popular, and everything we’ve done has kind of hit people hard, and some people have got offended, but we’re not just trying to sell records here. If people take it hard so be it. Then when we started touring it got worse. It added a whole new dimension. When we played in Venezuela people would say ‘don’t play that anti-Castro song, that’s not allowed here’ but we played it anyway. We have people come up to us and tell us not to do this and that, but we still do it anyway to see what happens.”

As mentioned previously, Brujeria doesn’t just put out albums for the sake of releasing music. There has to be something that genuinely ruffles their feathers and Brujo says that the way things are going with American politics fans of the band could be in for a sonic overload.

“There was no reason for a long time to put out an album,” he said almost regretfully, “and then here comes Donald Trump! It just ruined the whole country. He comes out, and he’s got everyone hating everyone again, and he has people scared. Everything that was positive and good he has come in and destroyed it and put things back to how they were in the 70’s and 80’s. That’s why we put out the single Viva Presidente Trump! That song was actually about wanting him to win the election so we can fight him as the President. I know we will be pissed off if he wins. Everything was going so good in the world and then here comes Trump and its back to the bad days. This next record, the one after this, I don’t think it’s gonna take that long to come out. He won’t even be indoctrinated yet, and the album will be out! It will make the U.S look bad… it’s gonna come apart, and once that happens there’s only down, and there’s no way to bring it back up in a hurry. It’s gonna get me back out in the machete way. When I’m angry things, move quick so let’s see what happens. I’m calm right now but if he makes President…”