Our Oceans and “Blue” with Karina Holden 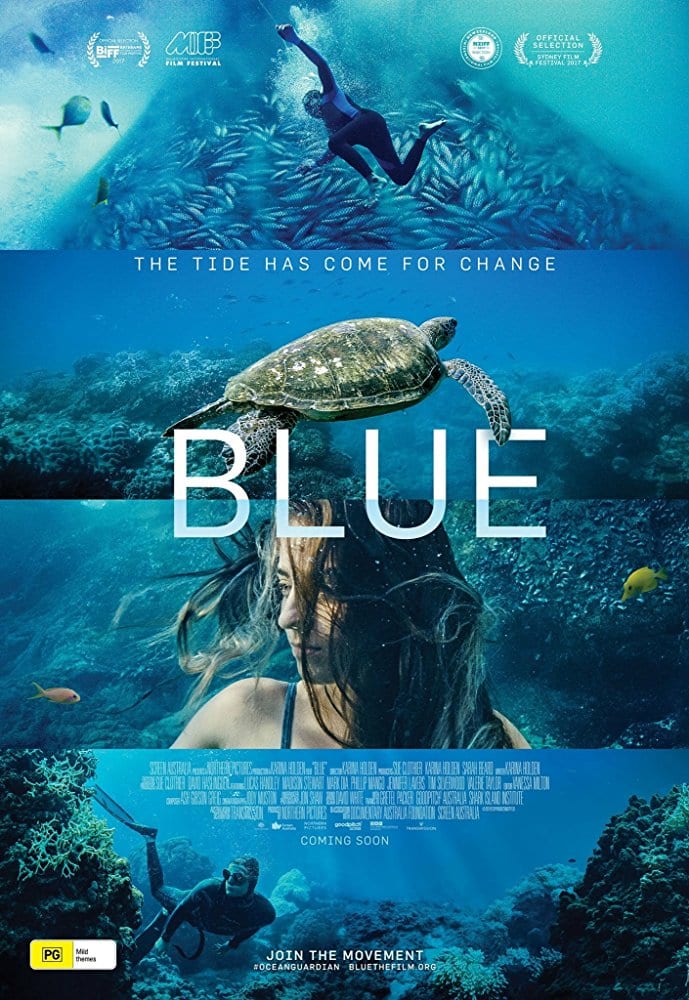 There have been a few environmental documentaries over the years that have warned humanity about the impact that we, as a species, are having on the environment around us. The Inconvenient Truth introduced a lot of people to the concept of global warming while The Cove showed us the barbaric side of the illegal fishing trade.

Few films, however, have had the impact that new Australian documentary Blue does. Directed by Karina Holden, the documentary shows just how much peril our oceans are really in. From illegal fishing in Indonesia through to the damage that plastic is doing to marine life such as birds and turtles… some scenes are graphic but are a must-see for anybody who cares about the future of this planet.

We caught up with director Karina Holden who sums up the documentary by saying: “The documentary is really the story of our oceans,” she explains. “It is a love letter to our oceans, but it is also recognising that our oceans are having a moment of crisis, effectively; and that it is time for us to stand-up and take notice and be part of the solution to protect them. So I was able to make this story and bring it to cinemas around Australia through Good Pictures Australia, which is an organisation that raises funding so that I was able to make this film.”

Karina says that her love affair with the ocean started at the very moment she was born at Manly Hospital. “My parents held me up as a baby at North Head overlooking the sea,” she says. “They told me that this was the world that I lived in and it became part of my life every day growing up around salt water, sailing and swimming, and having the sand between my toes as a kid and then growing up and sharing that with my child, as well.”

One of the things that come across clearly in Blue is the fact that most Australians are damaging the ocean every day with things like household plastics and don’t even realise it and that is a topic that Karina is only too happy to speak about. “I guess the heart of the film is this notion that we have kind of forgotten our impact,” she explains. “There’s this kind of carelessness, and if we only knew what impact that we are having with our choices, or the way that we consume or use things, then maybe we would make different choices. So plastics are obviously something that is in almost everything that we use, there is nothing that we touch that hasn’t got plastic in it in some way these days. We’ve kind of taken this culture of convenience these days for granted where something is so easy for us to pick up and use that we don’t even think about where it goes. And the idea that we just throw it away where we live on a planet where it has to go somewhere; that should be landfill, but very often, that is the ocean. So much of that plastic that is in our ocean has derived from our rubbish dumps or our drains.”

Some of the most harrowing scenes in Blue is footage of plastic being removed from the stomachs of very young sea-birds, and Karina explained to us how she discovered this horrific chain of events. “I guess as soon as you are tapped into the issues, you listen to what is going on, and you see who is active in this space,” Karina explains. “Jennifer Lavers is a Canada scientist who now lives in Tasmania. She has done some extraordinary work on sea-birds around the world, but is now doing a lot of work in the South Pacific, and her work really spoke to me because it was a visualisation of the moment that we will choke on the plastic that we are producing in this world and that is effectively what is happening to the species of bird that she is studying. The young are choking on plastic because the parents are believing what they are getting from the ocean surface is food.”

The other major point that Blue makes is that humanity is getting very close to literally ‘fishing out’ our oceans. “We are getting closer and closer every day,” says Karina. “And an important part of that is the individual choices that we make as humans with what we eat. In Australia, we have a pretty well-regulated fishing industry, but we do need to manage our stocks and what stocks we have left. But I would remind everybody the importance of knowing what we are eating – so when you order fish and chips, ask yourself: ‘what is it that I am eating – is it shark I am eating because that has consequences with the level of mercury that is potentially in the fish that you are eating, or it could be a species that has taken sixty years to get to the size that it is and then just to be causally consumed like that. So sometimes I think we need to start thinking about what we are actually eating. There are some great resources out there – the Australian Marine Conservation Society has a great guide – it is free, you can download the app, and you can check what you are eating by using this app in a restaurant, and we put these resources on our website, as well – www.bluethemovie.org. We talk about resources up there that will help you make decisions to help the ocean rather than harm it. So part of making this film was to make a toolkit so that if people watch the film and want to know more and get involved, they can by signing up and becoming Ocean Guardians and pledging the way they are going to change their own behaviour and they can form changes that hopefully will create some change. I hope that the average Australian takes away from this film the feeling that they are powerful, and they, as an individual, can make an impact on this situation.”

Blue opens in cinemas across Australia on October 12th.

PrevPrevious.It’s a “Happy Death Day” with Jason Blum
Next.Looking within The Acacia Strain with Vincent BennettNext