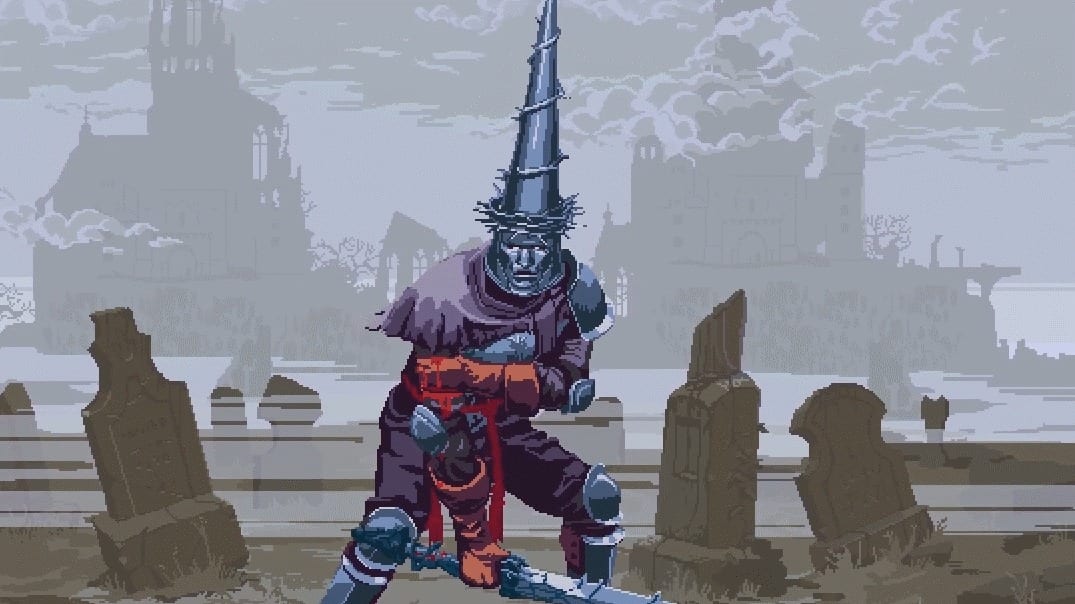 The term ‘Souls-like’ is thrown around a lot these days. First used to describe games whose mechanics are directly inspired by Dark Souls, its meaning has loosened over time, to the point that people will compare games that are even moderately difficult to the Souls series. Each new game seems to be ‘the Dark Souls of shooters’, ‘the Dark Souls of racing games’, seemingly as a compliment – but the phrase has all but lost its meaning.

So, interviewing The Game Kitchen on their newest action-platformer Blasphemous, I came to a crossroads. Blasphemous takes heavy inspiration from Dark Souls, from monster design to the look and feel of the world, down to the ‘YOU DIED’ screen that players will no doubt see hundreds of times. But talking about similarities gets dull, and I wanted to dig deeper, so I set myself a task: hold the interview without using the term ‘Dark Souls’.

Blasphemous’ world is one of haunting beauty: a dead landscape of decrepit bridges, kings without thrones, and wandering, aimless beasts. Indeed, the playable alpha (available only to Kickstarter backers) is more to showcase the art direction than the gameplay. As a fan of aesthetic-heavy games, I asked the team what kinds of consideration they took when designing the world of Blasphemous.

“It’s a matter of internal feedback and iterations. The art director has the main aesthetic vision; he gives general ideas to the artists, who come back with sketches. After that, the team offers feedback and we discard or iterate the sketches and concept art until we are happy. We need to keep a certain standard of quality that works with the project schedule and technical requirements.”

Game design can be restrictive, however. Countless designs must be left on the cutting-room floor, both due to time constraints (programming a single enemy or map can take weeks or months) and artistic vision. Anything that does not contribute to the ‘fullness’ of the game must be shaved out, as the dev team agreed:

“That happens all the time. As artists, we need to test a lot of stuff: our ideas come and go on a daily basis, so we are used to that. A friend told me once, “Don’t fall in love with your ideas”, which was one hell of a good piece of advice. Also, in our creative process, even when we really love an idea, sometimes when we try to translate it into the game we realize that it does not work. It can be very frustrating and sad to discard an idea we love. But, as designers, we should have strong criteria in order to make the best decisions.”

Wanting to lighten things up, I asked the question that’s been on everyone’s minds: why the helmet? At the time, I thought the main character’s design was simply made to be quirky and memorable, but it turns out there’s a deeper story behind it…

“We understand that the helmet might be weird and bizarre to some people. It is inspired by the particular costumes of the holy week in Spain. It is a tradition thousands of years old. Actually, Blasphemous’ main aesthetic is inspired by the holy week, culture, local iconography, and folklore of our southern city, Seville – one of the oldest in Europe and one of the richest culturally and religiously speaking. I encourage anybody to Google ‘holy week Seville’ to know more about it. It can be shocking and amazing at the same time.”

All these design elements contribute toward a living, breathing world that is easy to become immersed in. Blasphemous’ story is told through its environments, its crumbling palaces and icy plains; old relics half-buried in the dirt. This form of storytelling can be difficult to pull off, and I was intrigued about the benefits of ‘writing’ a tale through imagery.

“The benefits are numerous. The goal is to provide the players with a bunch of narrative layers that can be uncovered freely depending on the level of curiosity, attention, perception or will to discover the whole thing. As designers, it is very interesting work on this kind of narrative design because we can use a large variety of visual languages to communicate the story with the players. Also, using that, we provide players different interpretations of what is going on in the world, so uncovering the different narrative layers is lots of fun.”

Given the chance to advertise Blasphemous, The Game Kitchen showed their true passion for design aesthetic:

“Blasphemous releases in the first quarter of 2019 for PC, Xbox One, PlayStation 4 and the Nintendo Switch. The game is going to be a delight for those who loved the glory days of Neo Geo pixel art maestros. We have put a lot of effort and love into bringing back those visual memories, with the extreme purity of pixel-by-pixel animation. We feature much bigger sprites than was possible back then, but still 100% handmade!”