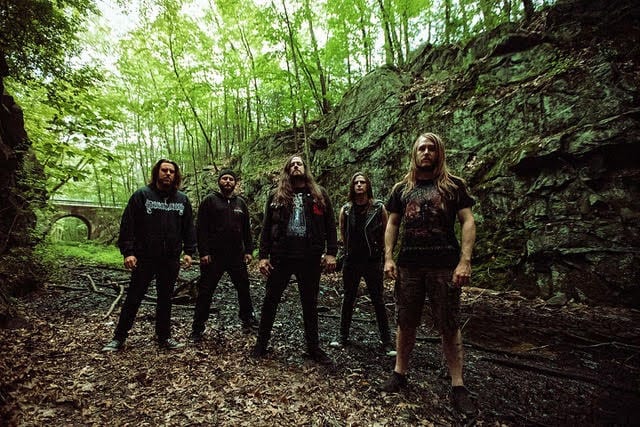 There has been no secret in the press over the past few weeks that The Black Dahlia Murder were looking to go one step further with their brutality on their new album Nightbringers. The band were promising it and once critics started reviewing the album it was obvious that they had delivered the most brutal album of their seventeen-year history.

When Heavy Mag caught up with frontman Trevor Strnad he very quickly re-assured us that yes The Black Dahlia Murder had in fact gone back to the old-school type of metal; metal the way they think it should be played.

As a conversation starts Strnad tells me that it is all summed up in the title of the album – Nightbringers. “It’s basically a continuation of the themes that have been there since the very conception of the band – you know telling the tale from the villain’s point of view. I feel that metal is the villain’s music and by liking metal, you are accepting that you are on the side of the villain. It’s a Satanic music, it’s a rebellious music. I feel that the Nightbringers are those of us that are in the know, we’re in the underground, we’re in the hidden world of metal. I believe that when you find metal it is an awakening of sorts and it’s like… I don’t know… a hidden world like I said. And the Nightbringers are us – the strong, the wolves in the world of sheep. I feel that metal is largely an irreligious type of music, it’s bucking religion, it’s bucking the notion that we have some kind of cosmic spanking coming towards us at the end of life. So Nightbringers is all about encouraging self-reliance and inner-strength and individuality.”

When the conversation turns to both of us reminiscing on when we first discovered metal Strnad doesn’t need any time to think at all. “Well it was about the time when the Black album came out,” he says thinking back. “It was all over the radio and I think that was my first foray into it. But it was Megadeth when they dropped Countdown To Extinction when I was in sixth grade. When I saw the ‘Symphony Of Destruction’ video that kind of mushroom-clouded my brain basically. From that moment on everything changed. I was like this is the most amazing thing I have ever heard and I wanted to be part of metal so bad from that point on and I just dove in headlong. A few years later death metal crept into my life, when I was about 15, it was 1995 when I got my first death metal records – Suffocation’s Pierced From Within was the first one and is still one of my favourites.”

One of the things that you notice when you listen to Nightbringers is that every track is solid. There are no weak tracks here and in a way, The Black Dahlia Murder have created perfection but Strnad says there was nothing done differently this time around. “We didn’t do anything different with what we do,” he says. “We are a bit spread out. We have three guys here in Michigan and the new guitar player Brandon lives in New Jersey and Max lives in Boston so writing is normally either guitarist going into their chamber of solitude and sitting in front of a computer and writing a song into ProTools and by the time I get a glimpse of it it has both guitars, bass and some decently sounding programmed drums… and I mean this record came together at a very fast rate actually. I think we were all so excited about Brandon coming into the fold and all that he was bringing. He wrote fours songs for the album which we didn’t expect, this will be the first time that anybody is getting a glimpse of what he can write. ‘Matriarch’ is his song, the second one that we previewed and yeah man he just really lit a fire under all of our arses. I think everybody was responding to his positive energy and it was insane to have somebody so young jump in and just take the reins like that. You know even in the studio when we were mixing at the end he had his hands in the pie big time. He knows his way around the studio, he knows all the frequencies, he knows what his guitar should sound like and I think a lot of the quality of the final product is something that he is responsible for. It’s been like this immense blessing to have this insanely talented person to come into the band and just grab hold like it. I feel like it has been a huge jump in quality even from the last record, which I’m still very proud of but the difference is so noticeable it feels like we just skipped an album in our evolution somehow. You know we’ve been trying to make songs that are more individualistic and could stand on their own and I think this is the ultimate manifestation of that. Like you said every song is super strong and they could all be singles. It was very difficult for me to pick the three tracks that were going to precede the album’s launch for that reason… because they are all so various to, I don’t feel like one song can really define the whole album.”

With the band spread out across the States Strnad actually recorded his parts of the album at home and we soon start talking about the negatives and the positives of working from home. “It’s been more economical for us to record at home,” he explains. “It seemed smarter to just bring in one person who is going to produce and put them up rather than sending all of us to another state for weeks on end. It’s just been a more economical route to do it this way, but when it comes to doing vocals at home there is no more comfortable place to do it Singing as you do it live in the studio is actually very hard to do. It’s in a different world then being on stage where you have all this bass rumble at your feet and a crowd pumping you up and your band head-banging all around you. You know all those elements are gone so any kind of comfort level that you can get when you are in the studio recording vocals is super necessary so being in your Ninja Turtle pyjama pants out of your own closet – there is nothing more relaxing than that. It was definitely awesome but then, on the other hand, you have a significant other living with you that is trying to live her normal life and you are just upstairs screaming your ass off so in a way it can be a little weird being at home. You can get a little distracted at times but overall I think it has been really cool for us.”

Strnad also has some great advice for everybody out there before they sit down to listen to Nightbringers. “Go out and get some weed and a couple of pies,” he says. “Then get ready to go to another dimension with the Nightbringers.”