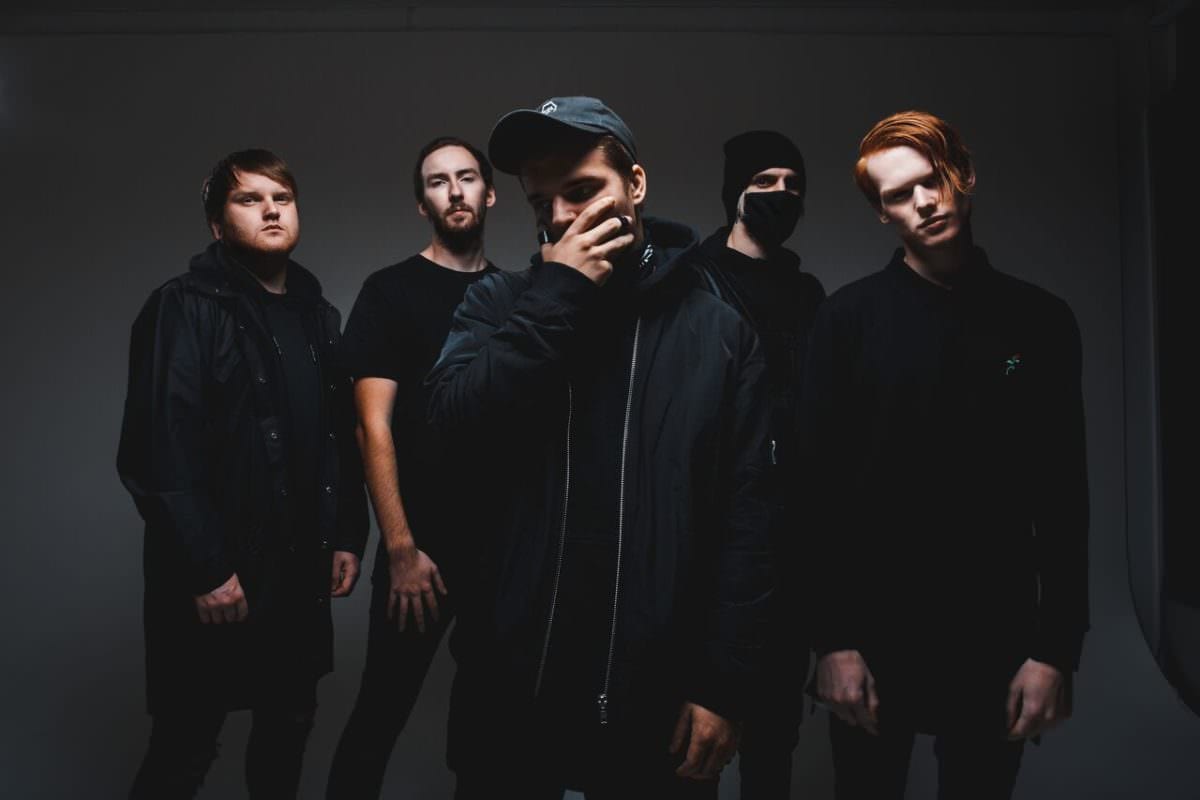 With a name like Alpha Wolf it would be natural to assume that the band’s music would be dominant, brash and unyielding, but according to vocalist Aiden Holmes and guitarist Sabian Lynch, the hardest part about living up to their name was establishing their own sound and identity as the fresh band on the scene.

“That was definitely both difficult and important,” Sabian stressed. “As a band, in our early days we struggled with that and our music fell trap to being just another one of those bands out there so we took a year off to write all of our songs and make sure that it didn’t happen again because we knew we didn’t wanna put time into something that was just gonna go to waste. We definitely wanted to make something special. Adding Scotty and Aiden into the band for this record has definitely helped with that and everyone has brought their own A game basically and given everything they’ve got.”

When it came time to refine and nurture what would become the Alpha Wolf sound, both boys say it was a collaborative effort of individual components that each brought to the table.

“Sabian had an idea instrumentally,” Aiden explained, “and I came from a band previously where it was all about how heavy can you go; how low can you go; how high can you go and with me joining Alpha Wolf I made a decision to use my real voice and be honest and not hide behind vocal techniques. I just yelled and Sabian was raw with his instrumentals and Scotty did a lot of writing as well and it came out better than we could have hoped.”

“Basically to get our sound I feel like we were just extremely honest,” Sabian added. “We wrote for ourselves. They are twelve songs that we are going to listen to ourselves for the next however long. I know I’ve listened to the album countless times because they are personally my favorite songs so I feel that’s worked out well for us by being totally honest and not trying to make music that we think is cool or other people might think is cool. Whatever we personally want to listen to, we’ve written.”

Having originally started life in Tasmania, Sabian agrees that the band didn’t start gaining traction until they decided to make the move across the Tasman and call Melbourne home.

“We started as a four-piece straight up hardcore band in Tasmania which was myself, John and Jackson, who are current members, and another friend of ours,” he recalled, “and we slugged it out down there for a year but didn’t really know what we were doing. We decided we wanted breakdowns and to be heavy basically and took that approach. I ended up moving to Melbourne shortly after that and wanted to push us interstate but we still kind of didn’t have too much direction. We got some mad shows and did a couple of runs around the state but it was nothing that hectic. It was then that we took a whole year off to re-evaluate ourselves and come out as the Alpha Wolf that everybody seems to be liking now which is a bonus.”

Alpha Wolf release their debut album Mono on July 14 via Greyscale Records and early indications are it will be well worth the time taken during the layoff to work it into a palatable product.

“It was quite a collective effort from everyone in the band,” Aiden offered. “It was very unexpected as I didn’t even know… I joined the band quite late; not necessarily late but just before the album and it was pretty much already set. Sabian hit me up to join and told me that pre-production for the album had been done, I just had to do some writing and stuff with him on it. We worked very hard and it actually happened very quickly. It was quite spur of the moment. We did our first shows – mine with the band anyway – over in Perth and then straight after that we went and recorded the album so it was pretty full-on and scary to be honest that it was happening so quickly.”

Debut albums can be difficult in the sense of knowing how much of yourselves to reveal through the music and how much to leave to the imagination for future releases, but Sabian says that when it came time to deciding what content to put out there it was simply a case of putting their best material forward and not leaving anything in the tank.

“We went about it as best we could,” he mused. “We recruited a new guitarist who just happened to be a good writer as well so we demoed probably sixteen to twenty songs and it was really only at that point we decided we were writing a full album. At the time we were just writing songs because we wanted to write the best songs that we could and we knew then we definitely had enough material in us to record an album. It took us probably a year to demo everything and then nail it down to twelve songs that we were happy to release and we feel as though every single song on the album is a very strong song. We didn’t have any filler. All the songs we want people to listen to and not have to skip anything.”

In keeping with the theme of the album, Mono’s artwork is strikingly basic, featuring a sole person who is small in stature but casts an imposing shadow. It is simple, yet highly effective and conveys perfectly the feelings of isolation and loss that reflects the subject matter.

“I guess the whole theme of Mono is being alone at a point of time in your life,” Aiden said. “Whether it is losing your family or losing your friends or loved ones. The recurring theme through Mono is pretty much feeling alone, no matter if it is us within the band or someone we are writing about. I guess with the artwork we wanted to keep it minimal because a lot of bands do quite extravagant artwork but we wanted to keep it simple. We hit up one of our good friends Nick Davis who has done a lot of merch designs and who has worked for us previously and he just hit it perfectly. He related to the album after we sent it and he loved it and sent us a draft with how he felt it should be and he nailed exactly how we were feeling as well.”

“One thing I really loved about the artwork is I feel all the greatest albums of all time have a very particular piece of artwork that you remember forever that basically gets cemented into your brain,” Sabian interjected, “rather than the bands that all use the same artist for all of their different works. Take some deathcore bands for example that all use the same artist that probably did one good piece of artwork once for a band and then everyone copied it and it all becomes a big blur of art. Not one of those stands out anymore, but I really think ours will get lodged in people’s brains that like our album and it’s one thing they won’t forget anytime soon. A picture can say 1000 words.”

After recently completing a tour with Aversions Crown, Alpha Wolf are back out on the road later this year with Thy Art is Murder, with Sabian saying the more they are out on the road the more adept they are getting at handling the many difficulties thrown at them on the touring circuit.

“The Aversions tour was really hard,” he confessed. “It was our first tour really with the new line up but I feel like we nailed it. It was a lot of fun and also the first time we have toured with the new version of the band musically and it was very scary and daunting but I feel like we came through it. We learned from our mistakes and didn’t make other mistakes that we thought we would (laughs). It was great and now I feel… with the Thy Art tour when we got offered that it was scary – we didn’t think we were ready – but after doing the tour with Aversions and Boris the Blade we feel like it’s something that’s gonna be a lot of fun and we’re just going to embrace it and do it instead of be worried about it.”