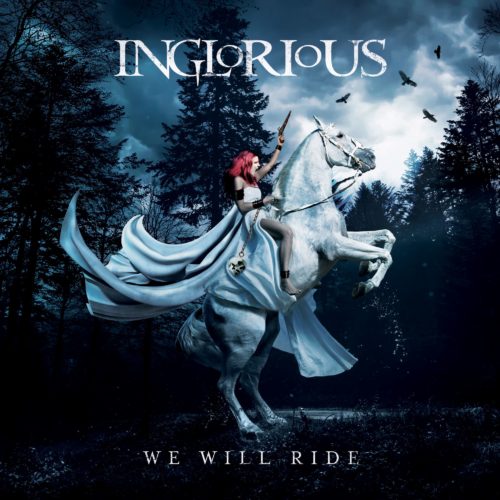 INGLORIOUS: ‘We Will Ride’

Led by the powerful yet soulful vocals of Nathan James, Inglorious are perhaps the best band you have never heard of.

At least I hadn’t until their single “Medusa” landed in my inbox last month, opening up a whole new, refreshed world of rock that I had until then thought long forgotten.

With a hard rock take on blues-infused dual guitar work, Inglorious sound like a band that have been transported here from the very birth of hard rock and left as a message to all of those who thought rock was dead.

Told after their self-titled debut album by Queen’s Brian May that “you guys really do look like a potent young Deep Purple but with a new slant – very classic” and hailed by legendary mixer Kevin Shirley ( Iron Maiden, Aerosmith, Led Zeppelin, Joe Bonamassa and Black Stone Cherry) as “the best British band since… well I could say The Darkness, but I really mean Led Zeppelin. Amazing singer; amazing band”, Inglorious have steadily built momentum over three albums before delivering their fourth in We Will Ride, which is out now.

Having previously sung with Trans – Siberian Orchestra and legendary Scorpions guitarist Uli Jon Roth, James has found his calling with Inglorious and deserves every ounce of adulation afforded him after this release.

It was only mid last year that James had to shuffle the lineup – bringing in guitarists Danny De La Cruz and Dan Stevens and bass player Vinnie Colla – but if you were unaware that more than half of the band were playing together on their first album you swear this line-up has been playing together for at least a decade such is their chemistry and cohesion.

The often duelling guitars are allowed to breathe and never suffocate each other, despite their constant interplay with James’ vocal delivery adding depth and substance to each tune.

Opener “She Won’t Let You Go” sets the tone for the remainder of the album, a guitar fuelled intro succumbing to the fire of the second guitar roaring to life and lifting the tempo of the song before James glides onto the scene, almost singing within himself before coming to life in the chorus and before you know it your toes are tapping and sending pulsating rhythms coursing through your body and into your soul.

Inglorious play their hand from the outset, with soaring guitar solos ripping through the heart of each song and turning it into an amalgamation of aural sensations and musical interludes that grabs you from the outset and grips tighter until the inevitable conclusion.

“Medusa” is a slightly rockier version of a blues track, complete with slide guitar and catchy hooks that would not be out of place in a sweat-drenched, beer-stained bar populated by those who live life on two wheels.

“Cruel Intentions” starts with a soft flamenco guitar intro before the ambience is shattered by the emergence of electric guitar that could be a subtle nod to the fact that rock was, is, and always will be King.

“He Will Provide” kicks in on drums before the guitars start singing, bouncing back and forth between an up-tempo drum beat that swings back and forth as if in battle. James’ vocal delivery on this is almost Ozzy Osbourne like in patches here, soaring majestically over the stuttering rhythm section in an almost refereeing fashion that holds back the two opposing forces before they clash.

“God Of War” starts off like an epic power ballad before the tempo gradually lifts and the guitars threaten to win the battle before subsiding once more into an eery calm that is shattered by the re-emergence of the dualling guitars. The song builds to an almighty rock finale befitting of its title before album closer and title track “We Will Ride” eases you towards the end of the album, eventually trailing off into the resonating reverb of the guitar as it stretches into the distance.

We Will Ride is almost the complete rock album, with softer moments giving way to rock ferocity that only comes from a band who are comfortable within themselves and each other.

It is almost scary to hear what Inglorious will come up with next after a full album together as a band.