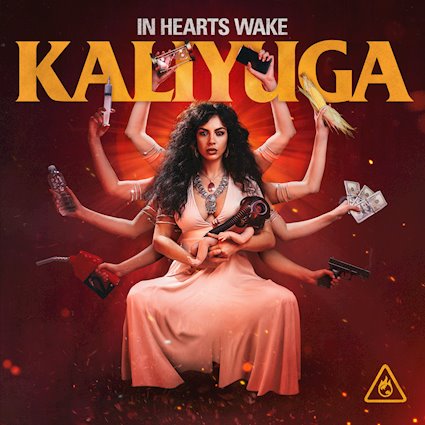 To capture how an artist can utilise negativity as a catalyst for their creativity it is best entrusted to an artist themselves; acclaimed actor, musician and stage director Michael Arden once said: “Sometimes, disaster can inspire ingenuity”. This simple statement is a very befitting epigraph to In Hearts Wake’s fifth album Kaliyuga – a record which was in part inspired by the bush fires which ravaged our nation, the connection and humanity that arose from the devastation and comprehensibly the melodic metalcore quintet’s activism for the environment and climate change.

However, this illustration is just one of the sparks that ignited the artistic fire for Kaliyuga – each member of the five-piece undertook their own creative paths in their downtime after relentless touring on the back of their fourth LP ARK and undeniably the experience that had a very significant impact was that of vocalist (manager, lyricist and director of numerous film clips) Jake Taylor; in short, Taylor ventured out in the wilderness of North America and learned survival skills without the help of any technology. It was here, the front-man experienced an awakening and thankfully, more inspiration for the new full-length.

Combining the above information with the first two tracks which open Kaliyuga, the listener is forced into a perception that this is a NEW version of In Hearts Wake. “Crisis” and lead single “Worldwide Suicide” pummel and crack like a deafening and explosive thunderclap where lightning actually pulverises whatever it strikes, a sound that sits somewhere between The Prodigy creating a dubstep metalcore mixtape under the instruction of Vein.fm and in all honesty, it is In Hearts Wake at their finest. Upon hearing the single and identifying the remixed powerful speech from Greta Thunberg (an address Jake Taylor was present for), this writer was transfixed; it was undoubtedly a risk the Byron Bay natives had taken, but the reward and creation are amazingly astounding.

If the first two tracks were a hazardous risk, then “Hellbringer” is more-so a calculated one. The song (featuring Jamie Hails from Polaris) begins as a sinister political statement identifying differences in the array of generations and their outlook of what “music” is (research Rob Zombie’s “Satanic Suicide! The Killer Rocks On!”) – shortly after though, IHW bring in their adored trademark polished melodic metalcore. Very much to their credit, the song actually has a “party nu-metalcore” element and a hook that infects minds to the point of inescapable even when music might be the last thing on one’s mind. It is a triumph but far from a new trajectory.

“Moving On” continues the nu-metalcore influence, although, this track has a massive injection of pop-sensibility and it is a bit defeated and too delicate. Certainly, Linkin Park has had a massive influence on the world since Chester Bennington passed and their status has increased remarkably – their guidance can be felt here but with excess sugar and not the right spice. This inspiration is found again on “Timebomb“, truthfully, this cut could have been a b-side from Hybrid Theory; it is better but not brilliance.

“Son Of A Witch” lands in familiar territory to “Hellbringer” and pleasingly, in musical terms, the grittier parts showcase their heavier side and what supporting metal royalty such as Slipknot may have unveiled to IHW. It flirts with the idea of growth, yet still circles the familiar, which long-serving aficionados will adore.

“Crossroads” will be the song that will cause division, featuring the phenomenal actor Georgia Flood, this is an artistic ambition that harbours prowess; sadly on the other end of the spectrum, it will confuse many. This cut could have landed on the underrated and unsurpassable Spawn soundtrack – the issue is, it does not sound like In Hearts Wake and that will be the cause of disinterest, which is unfortunate. Gratefully, it is these adventurous movements which the quintet are exploring that ensure this release is more than memorable.

“Husk” returns to the Linkin Park motivation which portrays the message of the song and its feeling of hopelessness but not the destruction of spirit. It’s worthy but not praiseworthy.

“Nāgá” is an instrumental marvel that needed to be longer and sooner on the album; it is the right introduction for “Force Of Life” where the band brings in their heavy onslaught – to be frank, this was very overdue.

New single “Dystopia” has initial muscle, but opts for melody and respectfully has a misleading journey. It doesn’t feel complete, almost that more needs to be said, but perhaps that is its purpose – to trigger the interest. “2033” is that interest – heavy, powerful, worrisome, haunting, awakening and the climax. Famed English writer John Heywood summarises it best with “A hard beginning maketh a good ending”.

In Hinduism, “Kali Yuga” is the fourth and present age of the world cycle of Yugas or “ages”. This is known as the end of the four ages that comprise a cycle and is often referred to as the “dark age”. In Hindu belief, the Kali Yuga leads to the destruction of the world and then the creation of a new cycle of the four Yugas. In Hearts Wake have successfully delivered four career-defining albums revolving around the elements: “Earth”, “Air”, “Water” and now “Fire”. Where our world goes next is, to an extent, in our hands. Michael Arden was quoted earlier saying: “Sometimes, disaster can inspire ingenuity” – In Hearts Wake accomplished this and more – we have their soundtrack, let’s provide OUR sound too.