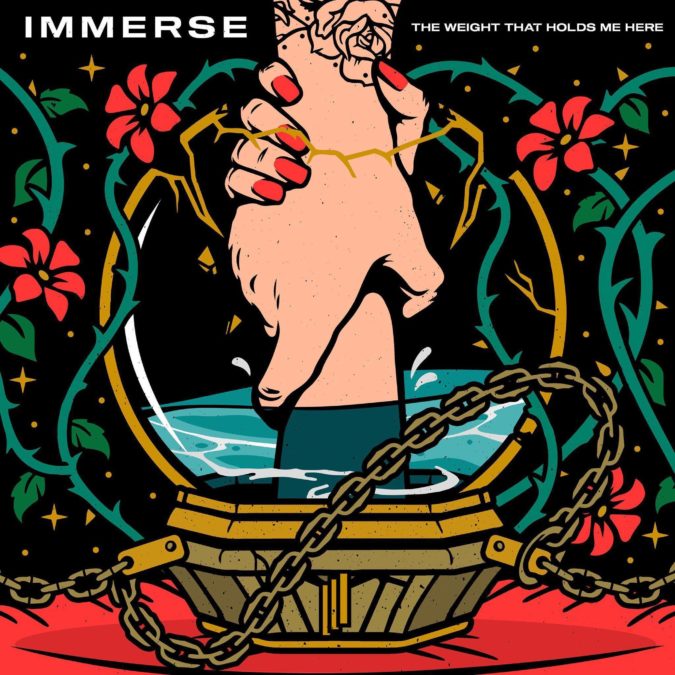 IMMERSE: “The Weight That Holds Me Here”

Bristol melodic hardcore outfit Immerse have definitely used their time in isolation to explore varying degrees of their musical psyche with their new album The Weight That Holds Me Here.

It is an ambitious and experimental take on the hardcore genre, combining softer, more precise moments with testosterone-fuelled aggression that surprisingly feeds off each other well.

Vocalist Archie Hatfield handles both clean and harsh vocals and it is a credit to his vocal prowess that both styles blend seamlessly into another throughout, not once feeling contrived or forced to any degree.

Citing influences for this album as bands like Architects, Polaris and The Story So Far it is easy to see how the sonic landscape of this album manifested over time, painting dark and foreboding textures over a dreamy and often ambient landscape.

Album opener “Vile” begins with a lone guitar riff that soon gives way to crunching tones and malicious intent before Hatfield begs the question “do you think they gave a fuck about you anyway?” before snarling and scratching his way through a seething track that is highlighted by cleverly placed breakdowns and enough musical scope to portray that The Weight That Holds Me Here is intent on rising above the often formulaic recent hardcore offerings and establishing itself as a defining piece of music in its own right.

“Redshade” provides possibly the best example of the musical diversity employed by Immerse, starting with gentle guitar plucking before giving way to an aggressive and layered song that displays the perfect contrasts of light and shade.

“2319” is the album standout, going directly for the jugular from the outset and threatening to choke the very life out of you should you dare to resist. It is unrelenting and brutal throughout and hints at a musical direction that one can only hope Immerse veers into more in the future.

Songs like “Burn” and “Here’s Hoping” convey the shades between angst and forgiveness inherent in Immerse’s DNA with each song on the album standing and surviving on its own merits without there ever being a go-to style or ‘safe’ song that a band generally defers to when they are struggling for continuity.

The Weight That Holds Me Here may not be for everybody – particularly those who prefer their music aggressive throughout – but for those willing to expand their senses and allow the musical message created by Immerse to soak into their pores the results are definitely worth it.