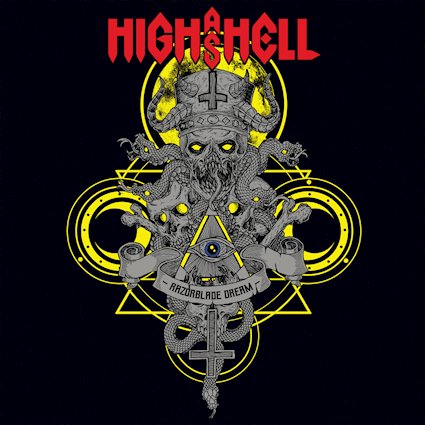 High As Hell come across as a band who don’t give two shits if you like their music or not. They simply do what they do and if you want to join them for the party great but if you don’t get the fuck out of the way!

Unlike many bands with similar attitudes, High As Hell are good enough to not only live by that mantra but also thrive and excel in it.

Usually when you hear the term old school metal bandied around you can be sure that although the band may believe they have the skillset to successfully replicate and expand on a musical era of the past, the truth of the matter is in name only.

Old school metal is about more than taking notes and playing similar chords to great bands that have come before, it is as much about feel, attitude and delivery, and this is where far too many bands fall short.

Not so High As Hell who, although professing their resolve of ‘old school metal, new school attitude’, actually have the chops and the music to back it up.

With their debut album Razorblade Dream out there for the masses these three metallers from Victoria can now be judged on merit not potential and with this collection of eight instantly likeable tunes have delivered in spades.

The album starts with the two singles released by the band, so if you have heard them then you already know what the rest of the album will hold – or do you?

“House of the Holy” is the perfect introduction, beginning with a chugging guitar riff that gives way to Dave Fazza’s aggressive yet accessible vocals that in no uncertain terms bellows “Jesus Christ Ain’t Gonna Save You” before launching into a dirty as fuck number that backs up the bands earlier statement with undignified aplomb.

“(Dying On) Lonely Street” throws up the albums first surprise, with a blues-tinged slow-burning opening riff that expands into a Down/Black Sabbath style tune that cleverly and subtlely ups the tempo in parts, threatening to explode before falling back into the steady rhythm that gives the song a pulse.

The title track begins with crunching riffs and dynamic vocals that lay the foundation for a swirling mass of chaos while “Powerwolf” is an infectiously menacing guitar-driven number that is possibly the stand out track on the album.

If you can sense a recurring theme here of crunching riffs then you are spot on. High As Hell are a heavily guitar-driven band, while also capturing the often elusive balance between instruments and vocals that instantly separate the pretenders from the contenders.

“Snakebite” is short, fast and frenetic raising the tempo significantly while still maintaining musical order, while album closer “Night Demons” – coming in at over 10 minutes – pretty much covers all of High As Hell’s influences in one monumental song.

Razorblade Dream sees High As Hell in full – dare I say it, old school – flight, harking back to the days when heavy music was not a badge of honour, but a way of life. The band openly wears their heart and influences on their sleeves and let their most powerful asset – their music – set the agenda.

For once I agree.